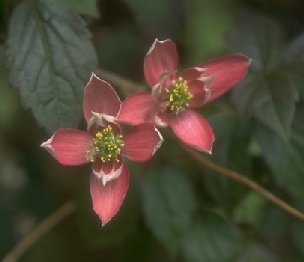 Clematis of the Month for April 1998

Since it made its first appearance in England and Europe in the early nineteenth century, the Himalayan Clematis montana and its descendants have been valued for several garden virtues: their vigour and swiftness of growth, the ease with which they can be trained to cover awkward spaces or objects, and, in the Spring, their spectacular outpouring of flowers, white or pink, and usually sweet-scented. C. montana itself had the white flowers, so much like the wood anemone that it was often called the Anemone Clematis, and its foliage was green. When montana var. rubens arrived later from China it brought an exciting new option; the stems and young leaves were reddish, and the flowers pink. For years these two came down side by side, and various seedlings of both were named and propagated and interbred, so that now a single batch of seed from a rubens cultivar like 'Mayleen' can yield offspring differing noticeably from one another -- some pink, some white, some scented and some not.

'Broughton Star' represents a relatively new development, for though it is a typical rubens cultivar in many ways, it is one of only five or six montanas so far introduced that have double or semi-double flowers. As the photograph shows, the center of the flower is not the usual 'eye' of yellowish stamens, but has a ring of what appear to be inner tepals. Often there are more of them than the four seen here, making for a full-textured flower, appealing at close range. The new foliage is typically bronzy, darkening to green as it ages. And -- what may be especially interesting to gardeners who have felt obliged to deny themselves a montana because of its expansiveness -- 'Broughton Star' is unlikely to get above 15'-16' (5 metres).

It was bred by Vince and Sylvia Denny and named for the parish in which they live near Preston, Lancashire, and introduced just ten years ago in 1988. (Broughton is pronounced as if spelt 'brawton'.) Lovers of clematis are indebted to them also for the beautiful large-flowered white that bears her name.

The other double and semi-double montanas have so far been rather limited in distribution except for the best-known of them, 'Marjorie,' which is a decidedly brawny cultivar with cream-colored flowers touched with salmon-pink. The newest is a seedling of 'Marjorie' bred by Alister Keay of New Zealand and named for his wife -- 'Jenny Keay.' This one flowers in small, spiky rosettes -- mainly white but edged with pink and blue -- and seems destined for success in a wider market. And others will doubtless follow.

The care for these is the same as for other montanas, a good grooming once the Spring flowers are gone, occasional deeper cuts if needed to remove thatching, and plenty of water. Mature montanas can dig deep for water, but young ones, especially in hot weather, may need watching to keep them from the rather dire effects of going dry.