Clematis of the Month for October 2011 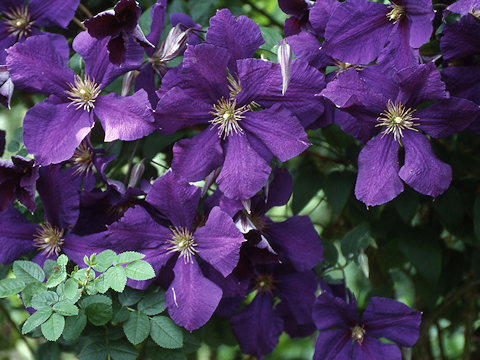 One of the most well-known clematis is the lovely purple Clematis 'Jackmanii'. It has been with us over 150 years as it was raised by George Jackman & Son in 1858 and introduced to the buying public in 1863 when it won an RHS First Class Certificate (FCC) in 1863. More recently in 1993 it won an RHS Award of Garden Merit (AGM). 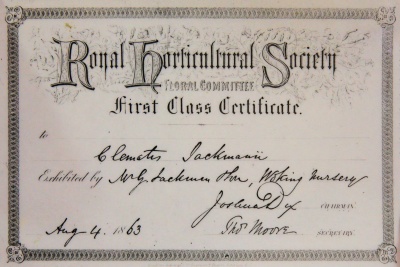 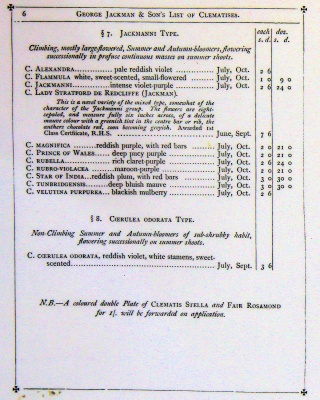 There is dispute over whether George Jackman the elder or his son bred it and also the crossing that was used. According to Magnus Johnson in his book "The Clematis", George Jackman Junior described the background to the hybrid 'Jackmani' in 1864 in the Gardeners Chronicle, issue 773 thus:

"In the summer of 1858 when Clematis lanuginosa and C. viticella Hendersoni and atrorubens were in flower, the idea occurred to me that if I could succeed in hybridizing the latter varieties with the former, I should get something distinct in colour and shape of flower. I did so, and the seed ripened, was gathered and sown in November 1858."

So I will go with George Jackman Junior being the raiser. But which of C. viticella Hendersoni (now known as C. × diversifolia 'Hendersonii') and atrorubens (now known as C. 'Atrorubens'), the latter having been lost to cultivation, was the parent with Clematis lanuginosa? 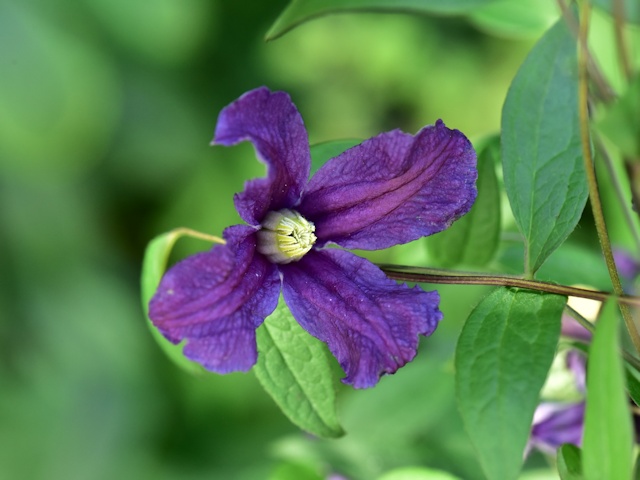 C. × diversifolia 'Hendersonii' , one of the potential parents of Clematis 'Jackmanii'

The RHS International Clematis Register and Checklist 2002 informs us that C. 'Jackmanii' was a seedling of a cross between C. lanuginosa and C. 'Atrorubens', which Magnus Johnson agreed with. However the late Dr John Howells believed after considerable research that it was C. × diversifolia 'Hendersonii'.

When C. 'Jackmanii' first appeared it became very popular and C. 'Jackmanii' became synonymous with "large-flowered clematis". This was one of the first clematis hybrids that the British gardening public had seen. Prior to this there were a very limited number of plants available, as you can deduce from the Clematis catalogue above. 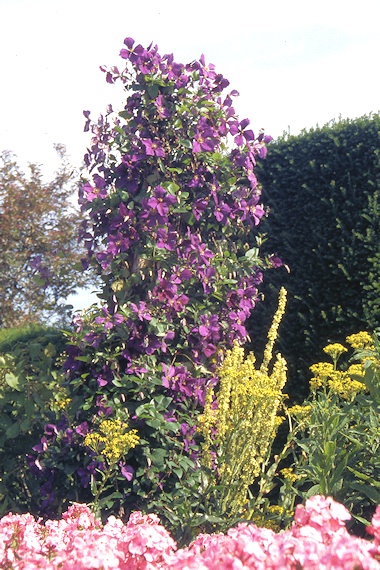 C. 'Jackmanii' growing at Great Dixter.
Note: this image originated as a 35mm slide. Consequently the flower colour is slightly more purple than it should be.

I have not grown Clematis 'Jackmanii' myself although I have often admired it, especially when I saw it growing in Christopher Lloyd's garden at Great Dixter (see above), so I turned to Rosemarie Allen for her experience of growing the plant.


My mother always wanted to grow Clematis 'Jackmanii' especially as it was a plant her own mother had enjoyed growing.

She managed to get a plant in the mid-to-late fifties and was eager to get into the ground. It was planted at the front of the house in a south east facing aspect to grow up a trellis between two of the front windows. I was only young at the time but still remember her excitement and how she expressed her own mother's love of the plant. Well, the plant grew between the windows and covered the wall with its beautiful large blue flowers for many years. In the 1990's my husband replaced the trellis to support its growth. The plant continued growing and outlived both mum and dad.

I do not know if

C. 'Jackmanii' is still growing there as I would feel too sad to go and look. One thing I am sure of is this plant has been well tried and tested over many years and was a good and reliable grower.

A final note: Rosemarie mentions the longevity of her mother's plant above and I asked Fergus Garrett who is now the Head Gardener at Great Dixter about the age of the clematis growing there. He said that a number of them were also very old, 30 years or more.

The plant does not need much care to provide a magnificent display year after year other than hard pruning in late winter (right down to the ground or one or two nodes above the ground) and a good feed (general purpose fertilizer and a mulch of good compost) to get it going in the spring. This care should mean that your plant will last many years and provide you with much pleasure.