Clematis of the Month for March 2012 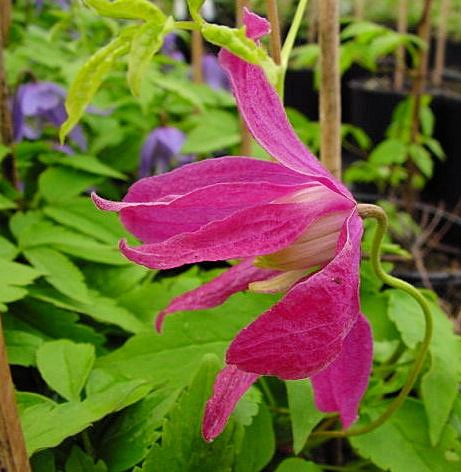 Clematis alpina forms have lantern-shaped flowers and their silky seed heads are attractive throughout the season. The alpina's are one of the first Clematis with flowers in Spring. The alpina cultivars has given rise to a range of different colored cultivars from white, pink, mauve, blue and purple in color, some becoming semi-double as those of macropetala so that we can chose out of all these cultivars. 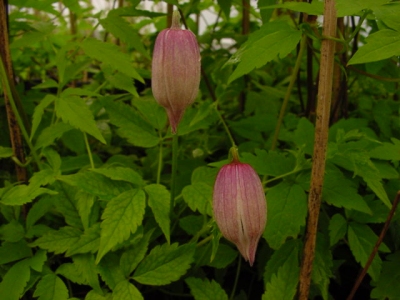 Clematis 'Constance' is a seedling from C. (alpina) 'Ruby' raised by Kathleen Goodman in 1986 and introduced by Raymond Evison in 1992. This cultivar is named after the actress Constance Cummings. C. 'Constance' is published by Evison 1995: 84; Bulkyard Plants Cat. 1994-96. C. 'Constance' was Awarded The 'Award of Garden Merit' by the RHS in 2002. 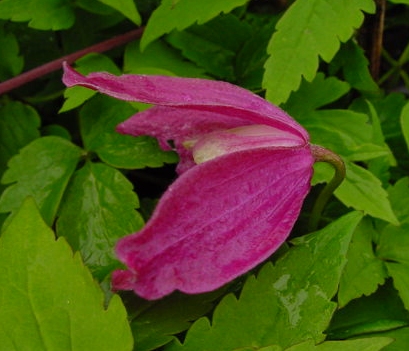 This alpina is usually not more than 3 metres (10 feet) tall. The rich purple-pink semi-double flowers are 5cm deep (2 inches). C. 'Constance' is a deciduous climber and is a floriferous and reliable small clematis.

Prune or tidy up after bloom or cut back hard soon after bloom to revitalize. This cultivar belongs to pruning group 1.

They can be used to grow along with other wall trained shrubs, shrubs in the border, on north facing walls to give added color and interest in mid to late spring. Due to their winter hardiness they can be trained to grow on low fences, low walls, on poles and uprights to pergolas, on very exposed locations. This small climber can also be used in a container. 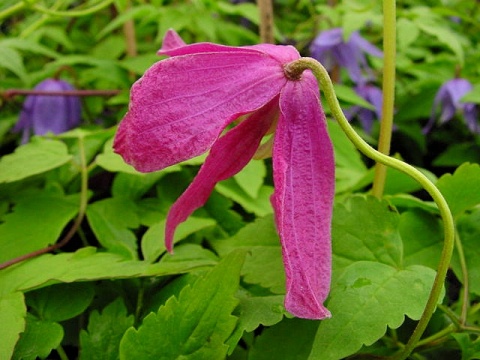 My experience with C. alpina cultivars is that they do not like wet 'feet' during the winter. I always had lost them at wet parts in the garden in Winter especially the first years after planting. You must place the alpina's in a rather free place in the garden so that you can see the flowers because the flowers do not stay far out of the many leaves. The C. 'Constance' has a brilliant color so that the flowers can be seen much better than the dark colored.