Clematis of the Month for April 2012 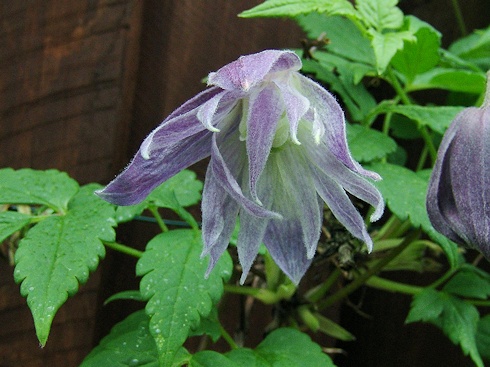 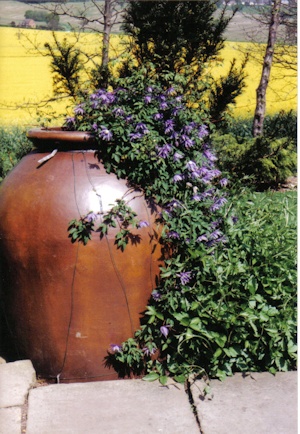 I first saw C. 'Maidwell Hall' growing in a large salt glazed urn in the Royal Horticultural Society Hyde Hall Garden in Essex, Great Britain, about 29 years ago. I am unsure now if this plant was correctly identified, but certainly plants being offered by nurseries differed considerably from this plant and over the years I have identified at least nine different cultivars labelled as such.

After trying to find the correct cultivar, it became apparent that there were two contenders for the original name. The original cultivar was introduced by Oliver Wyatt in 1956. However to date this plant cannot be traced. In the same year George Jackman introduced a plant which he originally named C. 'Lagoon', but this name was already in use so George Jackman re-named it C. 'Maidwell Hall' because it was supposed to be the same as, or very similar to, the Wyatt clone. Unfortunately George Jackman's description is vague. 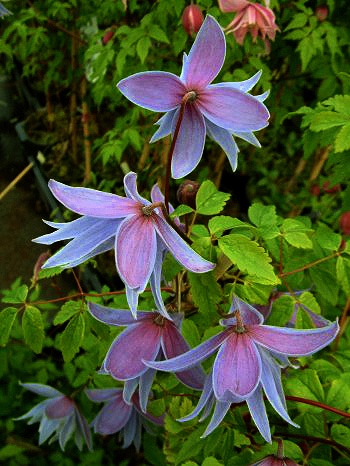 This Jackman clone can be traced back through Jan Fopma, who purchased plants from Jackman. Subsequently on the retirement of Jan Fopma, his nursery was taken over by Jan van Zoest. Cuttings of these plants are still being produced by J. van Zoest nursery in Boskoop in the Netherlands. This plant (see left, photo by Wim Snoeijer) is a quite distinctive macropetala and should be easily recognized from the eight or so impostors. The main characteristic of the flower is its neat appearance, the blue/grey outer sepals that have a distinctive colour change to plum red towards their base. The inner sepals are a slightly lighter shade of blue/grey and the colour is even throughout. 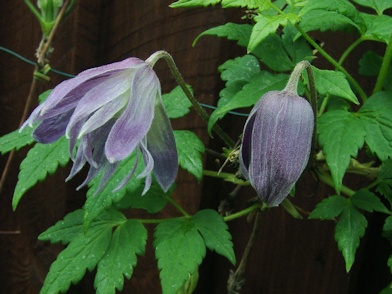 The flower is typically a macropetala as it bears a strong similarity to some wild collected species in size and colouration, but is certainly different to named varieties. The plant in our garden although recently planted seems to be perfectly hardy, but it benefits from being planted into well drained soil and is thriving in a north facing situation. 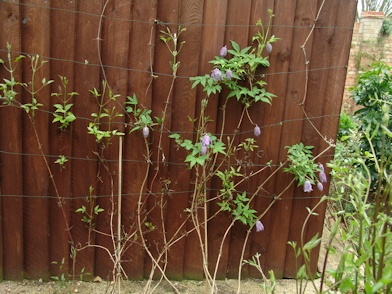 I find that macropetalas grow vigorously in our well-drained soil with a chalk rock substrate and benefit from a regular pruning every year in order to keep plants within bounds. If I leave pruning for a few years and then give a hard prune into 2 year or older wood in order to restore the plant to a manageable size, it usually results in little or no new growth. I also mulch the surrounding soil with garden compost in spring and autumn and give a handful of blood fish and bone meal after the plant has flowered. No additional feeding is found to be necessary as growth is abundant and the plant is covered in flowers each spring.

Editor's note: A detailed article on the history of C. 'Maidwell Hall', and the issues surrounding identification of the "real "clone by Roy Nunn will be published in Clematis International 2012.