Clematis of the Month for May 2012 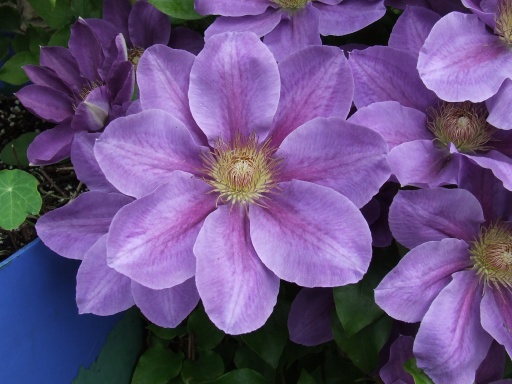 This is a very attractive clematis which has only been available for a short time but has already made its mark in the Clematis World. It is an early summer flowering clematis and I have buds on mine already. I would expect it to be in full flower by the middle of May (I live in England just north of London) so this makes it a suitable Clematis of the Month for May.

The colour is gorgeous but difficult to describe; I've seen it called blue, purple and mauve-blue. There is a definite bar which can be described as rose-pink or red. Unfortunately it is one of those clematis where the picture of the flower can turn out more red than blue and this is the case with my photos from last year. In my garden diary for the 3rd week of May last year, I have a note that C. 'Kinju Atarashi' was 'fabulous' and it was covered in flowers much like the picture below, though my photos are much redder.

This clematis is suitable for a pot or for planting in the ground. I grow it in a pot for two reasons; firstly my soil is very heavy clay and the early flowering hybrids do less well when planted in it. Secondly I have a small garden so I can have a number of clematis in pots and keep some in the shade and move the pots round once the earlier flowering clematis have finished blooming. It grows up to 2 metres (6 feet) high and flowers in May/June and again, though with less flowers, later in the year, depending on the weather. It is a 'light' prune clematis but as mine is in a pot, I prune it hard after flowering to get new flowering shoots for next year, even though this may mean less flowers later that year.

C. 'Kinju Atarashi' has two excellent parents, C. 'The President' and C. 'Hagley Hybrid' or C. 'Pink Chiffon' as it is often labelled in the USA. Both of these are excellent free-flowering clematis so it is not surprising that they have produced such an off-spring that has inherited their characteristics. 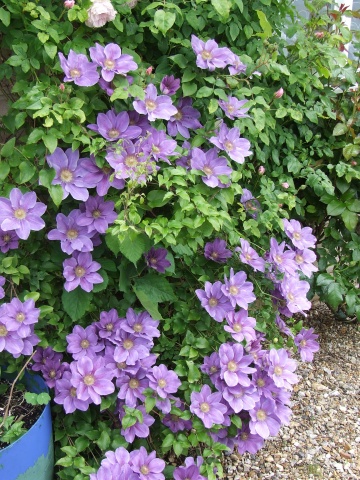 The history of this clematis is interesting. It was raised in 2002 by Charles Welch, an amateur plant breeder, who has bred a number of clematis but is better known for his many prize winning irises, fuchsias and sweetpeas. He has also written a book on propagation and plant breeding. A few years ago Charles asked Thorncroft Clematis in Norfolk, Great Britain to grow and trial this cultivar. The mother plant is still beside his front door (see right).

Jon Gooch of Thorncroft Clematis Nursery continues with the story:

"Through his fuchsia breeding and his involvement with a specialist grower, Charles Welch met a fuchsia enthusiast from Japan. Her name is Kuniko Atarashi and he named a fuchsia after her. The fuchsia is grown by Potash Nurseries in Suffolk.

Kinju Atarashi, her husband, said that he would like a plant named after himself and Charles kept that in the back of his mind. So when we said to Charles that we would like to grow his blue clematis, we asked him to choose a name. We expected him to say something like Blue Delight or something similar but he surprised us by choosing the name 'Kinju Atarashi'. 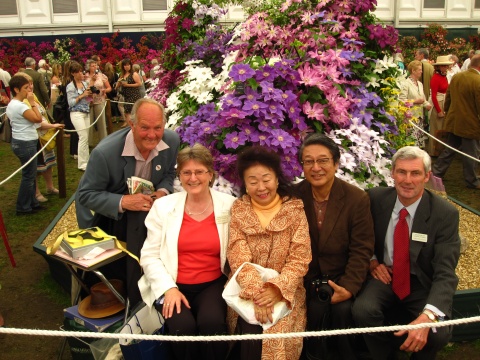 Kinju is not a clematis enthusiast but appreciates gardens and flowers.