Clematis of the Month for June 2012 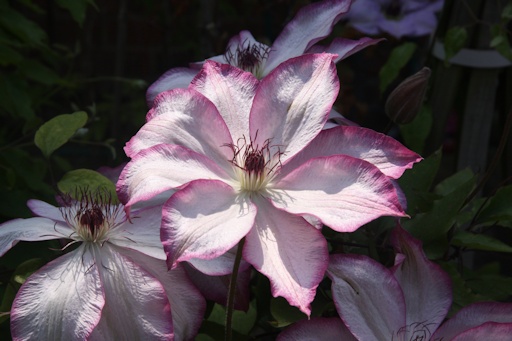 One of the loveliest and most striking clematis flowers that I've had the pleasure to see and own. The open flowers are white, though this is sometimes described as a very pale pink, but the colour is almost luminescent with edges of pinkish-red and a striking central boss of purple stamens. The flowers are reasonably uniform, generally with 8 'petals' - biologically, these 'petals' are actually sepals - they are oval in shape, attractively overlapping and pointed. The centre of the sepal has good vein markings but it is its edges that are the most attractive feature, slightly wavy or crinkly. Both the veining and the edges of the sepal provide attractive texture to the flower and enhance the coloured edging. 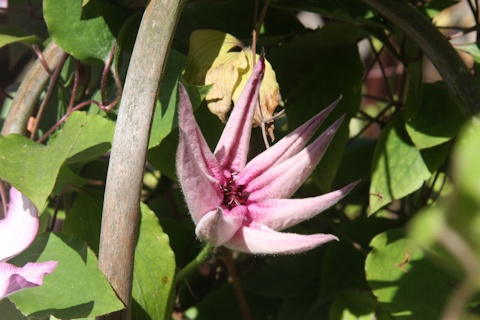 The long hairy pointed dark red-green buds open gradually and poise tantalizingly in an almost cupcake shape before the sepals separate a little more. The flower then opens a little further and then slowly the sepals unfurl, often unevenly, to reveal the lovely white rounded flowers, edged with distinctive pinkish-red and purple centres which are about 15 cms (6 inches) across. After a few days the flower will be almost flat with the sepals wide open. 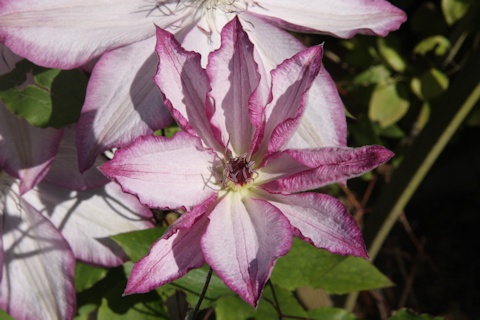 C. 'Omoshiro', as you may guess from the name, comes from Japan. The name means amusing, and also white surface - it is certainly pleasing to have such lovely white flowers in the garden.

Hiroshi Hayakawa has raised over 60 clematis cultivars and C. 'Omoshiro' is one of the best known, if not the most well-known, certainly outside of Japan. Another well-known and excellent cultivar of his is C. 'Fairy Blue' CRYSTAL FOUNTAIN.

C. 'Omoshiro' flowers on the stems grown the previous year so whatever you do please do not prune it hard in the spring as you will reduce dramatically the numbers of flowers that year. If you do wish to prune it; either hard if it has got very untidy or lightly to tidy it up then please prune it after flowering. Whatever you do you should get some flowers later in the year. 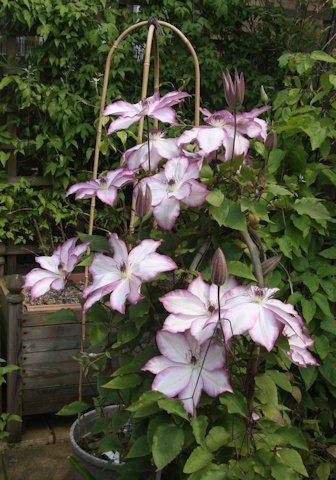 I have heavy clay soil and I find that the early large flowered hybrids do not grow that well in it, so I grow my C. 'Omoshiro' in a pot on my patio where I can regulate water and feeding more easily. I can also reduce the damage that snails and slugs can do to the plant (having clay soil there are a large number of these pests).

As I finish writing this at the end of May in England I look out of my window onto my patio and see C. 'Omoshiro' glinting in the sun; my visitor from Japan looks good and at home on my English patio.