Clematis of the Month for July 2012 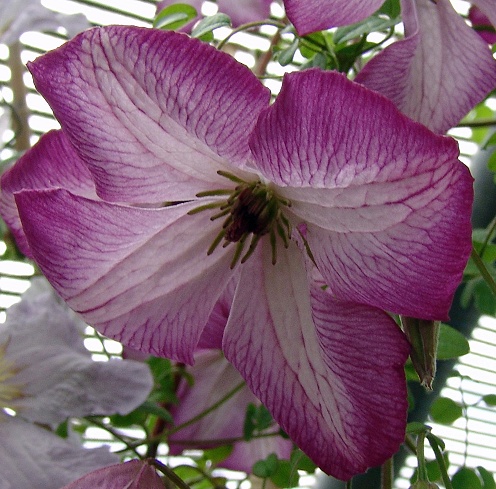 Raised by Wim Snoeijer at J. van Zoest B.V. of Boskoop, Holland in 1998 and was introduced in 2007. I first saw this plant in flower at the nursery of Sheila Chapman in Essex in June 2008, growing the full height of a commercial polytunnel.

Having obtained a plant in the spring of 2010 and grown it on in a 4 litre pot, it was duly planted out in the autumn to see if it would grow into a 5.0metre (15 foot) Amelanchier tree. To my amazement in the next season not only did it grow away quickly, it reached to top of said tree by mid June, when it started to flower. It then continued to flower well into September. Flowering in the second year was even more prolific.

One could describe the plant, as depicted in the plant finder, as follows;

Flowers broadly bell-shaped, 5-6 cm across, nodding, with up to 7 flowers per cyme.
Sepals 4, white with a pink margin, 2.5 - 3 × 3 cm, blunt, with margins touching.
Filaments green; anthers purple.
Deciduous climber with stems to 2.5 m.
Leaves pinnate, with 7 leaflets, simple to pinnate; margins entire.
Flowering period from June through to September on current year's growth.

But my description is much shorter, I liken it to C. 'Minuet' but on steroids. The flowers (of C. 'Zoiamladyq' I AM®LADY Q) are similar in colour and form but much larger, the plant also grows quicker and taller and flowers for a much longer period than C. 'Minuet'.

This plant is an obvious candidate for any garden so long as one can give it enough space to grow to its full potential. An example of how not to grow this plant was shown in the RHS Wisley Viticella trials which I visited in 2011. [Editor's note: See article starting on page 109 of Clematis International 2012.] Not only was the plant restricted to a 1.8 metre (6 foot) post, subsequent pruning had severely restricted its growth, and of which was limiting it full flowering potential.