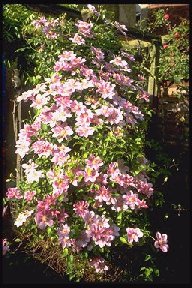 Clematis of the Month for May 1998

Nowhere in the world of clematis are individual tastes more varied than in regard to the barred or 'striped' hybrids. Some gardeners tend to rule out the whole tribe as garish -- until perhaps they have the good luck to come upon some particular one in a setting that does it justice -- while others have favourites that range from the soft contrast of a 'Sealand Gem' or 'Fairy Queen' to the brilliant showiness of a 'Mrs. N. Thompson' or 'Dr. Ruppel.' These bicoloured varieties are not essentially different from other clematis. Looked at closely, every large-flowered hybrid has a bar, in the sense that each tepal has a track down the middle, usually defined by three long veins, and often paler than the rest, especially on the underside. Ordinarily the difference in color is slight and may go unnoticed, though many a gardener can probably remember some stretch of unusual weather -- a cold Spring, or a long autumn -- in which a familiar clematis suddenly produced flowers with atypical bars. Still, for the varieties we think of as genuinely barred we are indebted to late 19th-century hybridists such as Marcel Moser who went to work on refining the erratic feature of colour in the bar area into a persistent trait. Later stages of that process continue today -- in Japan, in Russia, in Estonia, in Britain and elsewhere -- as breeders pursue further possibilities in colour and flower-form. There are now so many barred cultivars, old and new, that it is no easy task to round them all up. 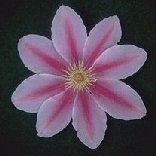 'Bees Jubilee,' however, is in no danger of receding into the pack. Introduced by the Bees nursery of Chester, England around 1950, it was soon in the international trade, and, though not so famous as 'Nelly Moser,' began to be regarded as possibly its superior-- not for vigor, where 'Nelly' has the advantage, but for the symmetrical grace of its flowers. The colours are light pink and carmine, set off by a creamy eye that darkens with the release of the pollen. Like other clematis with a complex heritage, it can produce surprises, such as an occasional Spring bloom with some of the flowers semi-double, or changeable color in the last bloom of the year, but on balance it is a reliable and abundant clematis, with a mature height of 10' - 14' (3 - 4 metres). It is often the better for a grooming when the Spring flowers are past, especially if it is being grown in a container or into the branches of a medium-sized shrub -- two good options for this versatile performer. As with most other two-toned clematis, the flowers hold their color better if protected from daylong exposure to the sun.

Afterthought: opinions differ on whether the name 'Bees Jubilee' was a stroke of wit. It depends on a wandering apostrophe. The correct name was 'Bee's Jubilee,' wasn't it? No, it was 'Bees Jubilee' because the name of the grower was Bees. In that case shouldn't it be 'Bees' Jubilee' because it was their property? But then whose Jubilee was it, after all? Bees, bees, or both? (Authors have not needed to wrestle with this, for whatever they decide, a copy editor will be along in due course, and an apostrophe will inevitably go in somewhere.)