Clematis of the Month for September 2012 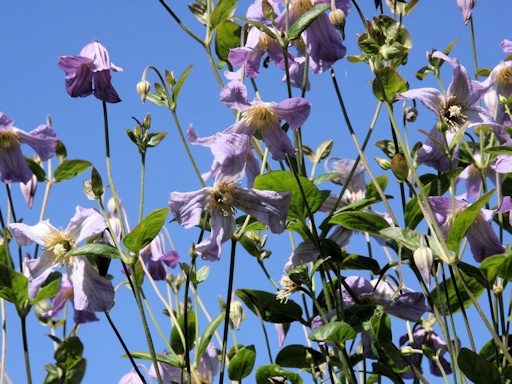 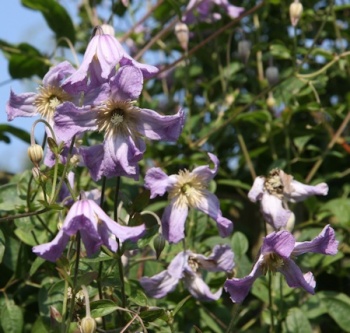 The colour of the flowers is a nice light blue with a gold centre, noticeable in a dark corner but it also stands out against a blue sky as you can see in the main photo above. I've read some reports that say that the colour can vary depending on the position of the plant from light blue to violet. In my garden on an east facing fence it is a light pale blue and very noticeable due to the colour and number of flowers late on the season.

The plant has a very erect growing habit so one tends to look up into the flowers. In my garden it climbs up behind a trellis against a fence and sticks out at the top and then cascades down. I also noticed this erect growing habit at Wisley in the RHS Viticella Trial where the plant has just grown straight up in the tripod that it is growing on as you can see in the photo to the right. My plant does not have many flowers until the top part but that does not matter as, due to its position, I would not be able to see them. 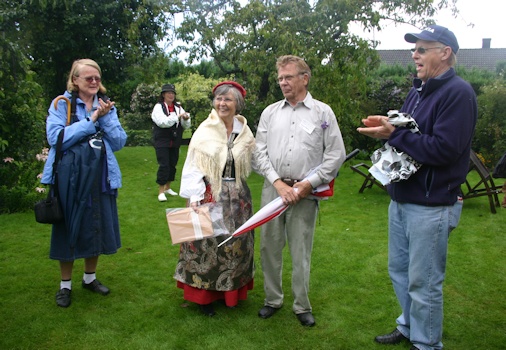 I believe that I first noticed this plant in Sweden in 2007 during the Society Conference and Visit to celebrate the 100th anniversary of the birth of Magnus Johnson and 300 years of Carl von Linné.

C. viticella 'Hanna' was raised and selected by Sixten Widberg in Sweden. Sixteen and his wife, Ingar, have been members of the International Clematis Society for many years and are known to many members. Sixten has been growing clematis for a long time. I think that I saw the plant growing in their garden and was so impressed by the colour and number of flowers that I purchased it soon afterwards.

Included here is a photo of Sixten and Ingar with Karin and the late Bengt Sundström on the rainy day we visited Sixten and Ingar's garden in 2007, with Ingar cheerily wearing her national dress. The rain did ease off eventually and allowed us to enjoy their lovely garden including the clematis. You can find more details about our trip by visiting Previous Events page and selecting Sweden 2007.

Recently I asked Ingar how C. viticella 'Hanna' was named. She told me that it was named after their daughter, Hanna-Louise. As Ingar continues "It was when Manfred Westphal was visiting us a long time ago and he saw this clematis. He found it pretty and wanted to propagate it and asked Sixten if he could do so and in that case, Sixten should give name to the plant."

I asked Ingar and Hanna-Louise for a picture to use in this article as I find it interesting to include a picture of the person that the clematis was named after. My attention was caught when I saw that in the photo of herself that Hanna-Louise kindly sent me, she was wearing a blouse of a light pale blue colour, very close to the colour of the flowers of C. viticella 'Hanna'. I suspect that blue is one of her favourite colours and another reason why Sixteen named this elegant flower after his daughter!