Clematis of the Month for October 2012 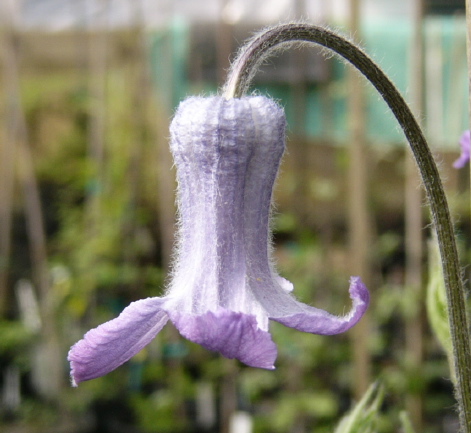 This description was first published in the Ranunculaceae Society Newsletter, Spring 2005.

Of the forty-odd species and subspecies of clematis native to North America, more than half belong to the section, or in Christopher Grey-Wilson's classification the subgenus, known as Viorna.

For decades the only member of this tribe with much of a claim to public notice was the red-flowered C. texensis, valued by gardeners and breeders alike despite such extreme scarcity year after year that it was almost easier to find in books than in cultivation. Students, of course, knew there were others of these bell- or urn-flowered species, often called "Leather Flowers" because of the tough texture of their sepals, and energetic hobbyists like Colonel Spingarn in the 1930s did what they could to persuade U.S. gardeners at leas, to look into this native heritage. But it is only in the last two decades that gradually improving supplies of seed have made it easier for enthusiasts at home and abroad to try several others of these species, including the one most widespread in the American West, C. hirsutissima. From the gardener's point of view the Leather Flowers are of two kinds, climbers like C. texensis, C. crispa, and C. pitcheri, and non-climbers like C. addisonii and C. ochroleuca, for which the standard description is "herbaceous erect", though in fact some of them can occasionally build a woody base. C. hirsutissima is one of this latter kind. Like the others it seldom grows tall, rarely extending to more than 20" (50cm) and usually quite a bit less. The plant can look enough like a Pulsatilla to be taken for one, and indeed that name and the name Anemone both figure among its outdated synonyms. In cultivation the species can be hard to establish, but once past its shaky beginnings it can develop into a goodly clump and have a long life. Its mostly unbranching shoots start out slightly hairy but tend to become glabrous in later growth. Their foliage is what readily distinguishes the plant from other clematis. The leaves are stemless or nearly so and finely dissected, almost fernlike in appearance, and slightly hairy in youth, though often they too become glabrous as the plant puts on more height after bloom. The description of these leaves is a taxonomist's nightmare, owing to variation in the species over its vast geographic range. But to speak broadly, except for the lowest pairs, which are often simple, they are likely to be 2-3-pinnate, with the segments usually narrow, often lobed, occasionally slightly serrated, and of a matte green or grey-green colour.

Unlike some of its southern relatives that have very confined habitats, C. hirsutissima can be found in scattered populations through most of the Rocky Mountain region and beyond it into eastern Washington and Oregon, a territory stretching some 1500 km from British Columbia south to the state of New Mexico, and even a little farther west in the form known as var. arizonica. It grows not in the highest elevations but mainly in the foothills, on slopes or in grasslands that are moist in the Spring when it normally comes into bloom, but dry later on. It is often found at the edges of pine forests, as if to stay away from too much sun, but seems not to object to rocky ground or even clay.

Now as to the flower. Like the other Leather Flowers, this one is a bell with four sepals recurving at the tip, tough-textured as we said, and usually slender, though short chubby specimens can sometimes be found. Most illustrations show the flower with a purple or violet skin beneath the hair, but the colour can vary from a grayish white to lavender or blue, and sometimes if the tips fan out prominently they will be seen to have a deeper colour than the rest of the bell. Whatever the colour, the flower is held nodding on a long, gracefully arching stem, and both the stem and the blossom are to some degree furry. It is said that the farther north the plant grows, the furrier it is likely to be. In any case the fur, which can glisten if the sun catches it just right, is one of the most winning features of the plant, allying it obviously with such downy relatives as the North American C. coactilis and the Asian C. fusca, though whether it is really the "hirsutissima", the hairiest of them all, is open to question.

Some excellent judges have taken special note of the variant of hirsutissima known as var. scottii, praising it for the appeal of its foliage and flowers and also for being easier to establish than the type. But it should be observed that this plant has been a source of uncertainty for years, authentic samples of it seeming forever hard to find, and botanical descriptions do not lay down distinctions between it and the type that gardeners can readily identify. Some confusion about it persists in the trade, so it's wise to ask after the pedigree of a plant offered as var. scottii.

The formal designation C. hirsutissima Pursh tells us something more about this western wildflower - that it was among the discoveries of the most celebrated journey of exploration ever conducted on the American mainland. "Pursh" refers to Frederick or Friedrich Pursh, the German-born botanist who gave the plant its name. He did not discover it. He was hired by Meriwether Lewis, one of the two leaders of the storied Lewis and Clark Expedition, to help preserve, classify, and publish the many plants—some 80 of them "new to science"—they had found as they travelled by Congressional mandate across the unknown middle of the continent, the giant wilderness acquired from Napoleon in the Louisiana Purchase of 1803. Their arduous three-year trip to the Pacific and back, and the journals that recorded it, make a fascinating story, not least for the often-detailed accounts of animals and plants. It is due to Lewis' journal that we know even the exact date of the discovery of C. hirsutissima—May 27, 1806. It was found near what is now Kamiah, Idaho, while the "Corps of Discovery" (the official name of the expedition) was holed up waiting for the snow to melt on the Bitterroot Mountains to their east, so that they could continue on their way home. In the herbarium that was made up from the surviving Lewis and Clark plants, now at the Academy of Natural Sciences in Philadelphia, C. hirsutissima is represented by what botanists call a lectotype, a definitive specimen though it bears another label - in this case a long-standing synonym that is still favoured in some lists—C. douglasii. With its great variety of local habitations the species has picked up a handful of other, more colourful names. It is known in one region or another as "Vase-Flower" or "Lion's Beard" or "Old Man's Beard" (for its wispy grey seedheads) or even "Old Maid's Bonnets", but its most common name by far is "Sugar Bowls". It does not seem to have bothered anyone that these sugar bowls are not only hairy but upside down.

Brewster Rogerson is a distinguished clematarian and North America's premier clematis collector. He was President of the Pacific Northwest Clematis Society and is an Honorary Fellow of the International Clematis Society.

Editor's note: For many years Brewster Rogerson wrote the Clematis of the Month, in all totalling nearly one hundred descriptions. Eventually health reasons forced him to retire from this position, though I have never given up on getting one or two more from him. I am immensely happy to publish this entry. I must also thank Mary Toomey for her sanction to use this article.