Clematis of the Month for April 2013 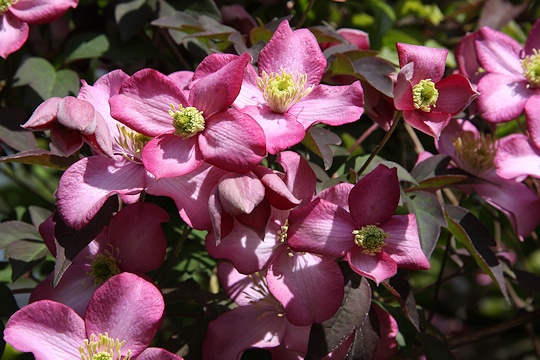 Clematis 'Freda' is one of the brightest pink clematis montanas and very attractive for that reason alone. However its best feature is that it is a small growing montana and will not grow rampantly and take over your garden and your neighbours too! Reports vary on how large it grows but 3 metres (10 feet) appears to be the maximum and in my garden, probably just about to that length along a pergola. I grow it because I have a small garden but love the small pink montana flowers.

The flowers start off a quite intense pink, almost a cerise pink, and then fade slightly in the centre giving a two tone effect. There are four sepals which are about 5 cms (2 inches) across. There is a slight scent which is more noticeable as the flowers mature but it is not a strong odour. The leaves are a bronze colour, attractively setting off the pink flowers, as you can see in the picture above. The leaves fade more to green as they mature. The late John Howells in his excellent Clematis The Montanas book says that only C. 'Warwickshire Rose' has deeper colouring in leaf and flower. C. 'Freda' was deservedly awarded an AGM by the British Royal Horticultural Society (RHS) in 1993.

The photo above and the single flower below were taken by my husband Ken a few years ago at the "National Collection of Clematis Montana" in Salisbury, Wiltshire, Great Britain (http://www.clematismontana.co.uk/). This collection enables you to see a large number of similar montana plants all in flower at one time and is well worth a visit to check that the growing habit and colour of the plant is suitable for where you want to plant it. I've not seen the collection myself but Ken said that it was very impressive, especially the way the clematis were grown naturally in the garden and that a number were substantial specimens. 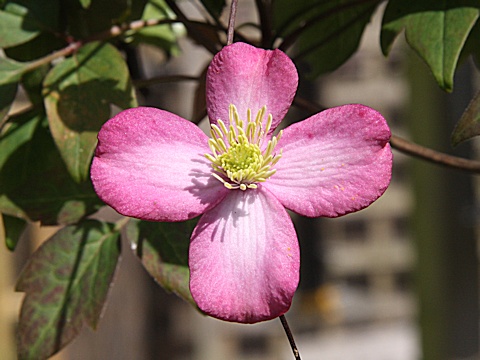 C. 'Freda' was found by Mrs Freda Deacon in her garden in Woodbridge, Suffolk, Great Britain. It was probably a seedling from C. montana 'Pink Perfection'. C. 'Freda' was introduced by the late Jim Fisk in 1985 who lived and had a clematis nursery nearby. Jim Fisk said in his book Clematis The Queen of Climbers that C. 'Freda' was 'the best of the montanas and not so rampant as the others.

We try to feature a clematis during the month that it is in flower; and looking at my records, C. 'Freda' does usually flower in April in my garden near London, though I've seen references to it flowering in May and June elsewhere in Great Britain. Clematis reference books say that it is one of the earliest to flower; and checking my Garden Diary I see that in 2011, it was 'still in flower' in week three of April, but in 2012 the comment for the same week was that it was not yet in flower. As I write this towards the end of March 2013, it is snowing and I suspect that flowering will be at the end of April this year. 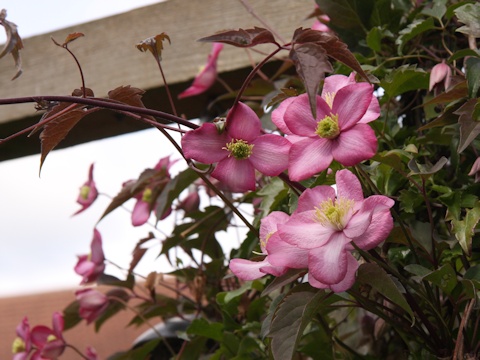 C. 'Freda' is a lovely small growing clematis and deserves space (not a lot!) in your garden to provide some early colour before the early summer plants start flowering.