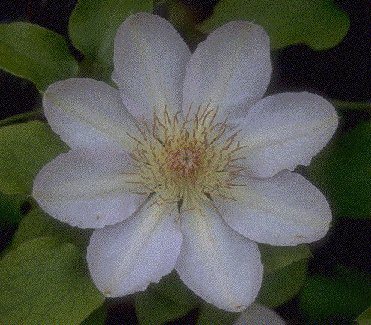 Clematis of the Month for June 1998

'Fair Rosamond' belongs to that second wave of large-flowered hybrids which comes along fairly late in the Spring, blooming on the year-old wood. Though on first acquaintance both the flowers and the stems of this variety seem delicate enough to prompt worries that the plant may be fragile, it soon proves otherwise. 'Fair Rosamond' is nobly resistant to hard times, and settles quickly into producing two good flushes of bloom in a year. Otherwise it could hardly have stayed in the running with growers and gardeners, always eager for something new and different, for nearly thirteen decades -- ever since it came from the Jackman nursery in 1871.

Part of its appeal may even spring from the apparent delicacy, and the ability of the plant to overcome it. The stems are relatively thin, and easily broken if a gardener with less than superhuman patience tries to disentangle them a month too late, but the plant is of bushy habit, and in youth readily sends up new stems from the base. Ordinarily it will reach 6' to 9' (roughly 2 to 3 metres). As for the flowers, the first ones -- if the Spring has been cold -- may have a ghostly midrib of green or gray and look slightly unprepared for scrutiny, but the effect is brief. The blossoms that open just a little later will return to form, with the familiar blush-white tepals soon fading to white, set off by that splendid boss in the center.

In truth, though, 'Fair Rosamond' probably owes much of its good repute to another feature that sets it apart. Nearly everyone finds it fragrant. There is not much agreement among nostrils when it comes to the other large-flowered hybrids; perhaps only 'Duchess of Edinburgh' is generally credited with a scent, though some eager sniffers cannot detect it, no matter how hard they try. Others -- 'Miss Bateman' and 'Snow Queen' come to mind -- get an occasional nomination. But with 'Fair Rosamond' there seems to be little or no doubt. The scent is delicious. (The doubt comes in when one tries to judge whether it suggests violets or roses.)

The 'real' Fair Rosamond was a twelfth-century lady named Jane Clifford, who earned her place in romantic legend as the mistress reportedly installed by Henry II of England in a moated bower of roses, no doubt to keep her out of the clutches of his wife Eleanor (of Aquitaine) and her henchmen; the story is told in Higden's Polychronicon, but has had sensational improvements -- a dagger and a poisoned bowl, for example -- from later hands.

The first published reference I have found to this cultivar is the Catalogue of Bees Ltd. for 1958, though I have not seen the original to check the punctuation. It was raised at Bees' Nursery, presumably about 1956 and may well celebrate the 50th anniversary of the founding of the nursery in 1906.

There is a recent biography of A.K. Bulley, called 'A Pioneering Plantsman' by Brenda McLean, which states that Bulley began the nursery in 1904, and in 1905 called it The Co-operative Bees Ltd. In 1906 he changed the name to Bees Ltd. This book gives the spelling Clematis 'Bees' Jubilee', and also cites Armeria 'Bees' Ruby', Incarvillea mairei 'Bees' Pink' and Lobelia 'Bees' Flame'.

Anyway - unless contrary evidence surfaces, I have decided to put 'Bees' Jubilee' into the International Clematis Register, with 'Bee's Jubilee' and 'Bees Jubilee' as synonyms.