Clematis of the Month for June 2013 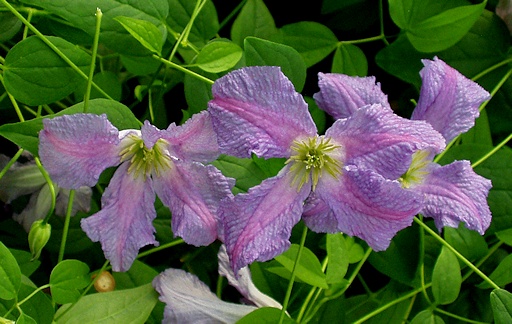 Having seen the picture of Clematis 'Morning Heaven' in the 2009 edition of Clematis-Westphal Catalogue [Editor's note: within the catalogue this clematis is named C. viticella 'Morning Heaven', identifying the group to which it belongs], I was intrigued by its subtle two toned colouration of the inner face of the sepals, described in the RHS International Clematis Register as light blue, with a red-purple stripe, I would describe the colour as violet with a purple/pink bar, but certainly the colouration is subtle and charming. This plant was selected in 2005 by F. M. Westphal, and introduced in 2008 and appearing in his Catalogue in 2008/9.

Somewhat surprisingly the plant did not take the normal three years to reach its peak of flowering, as it had reached a mature size in two years and has a good display of flowers every year after it was planted. In our garden C. 'Morning Heaven' has normally reached the top of a 2 metre (6 ft) fence by early June and starts to flower from mid June onwards, peaking in July, but continuing to flower into September. The ultimate growth of this plant is around 3 metres (9 ft). Flowers are normally hanging as in the species, but some are outward facing, which shows off the subtle colour to best effect, the flower is also complimented yellowish green stamens. I have found this typically formed viticella combines well with other clematis. Combinations of C. 'Morning Heaven' with C. 'Princess Diana', C. 'Odoriba' and or C. 'Jenny' have proved to be successful.