Clematis of the Month for September 2013 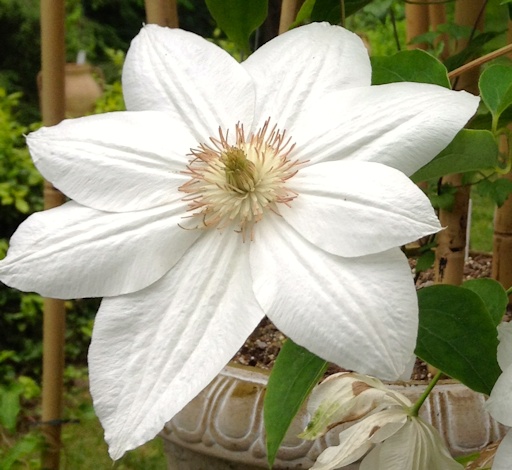 In 2006, I obtained the large flowered clematis, C. 'Mrs. George Jackman', and in 2009 added a second plant. As one starting point to this discussion, I will say that I am very happy both of my plants are alive and well.

Perhaps a more important starting point, the span of time between the plant's documented introduction in 1873 and 2013 is in itself a significant and complimentary statement about the plant. 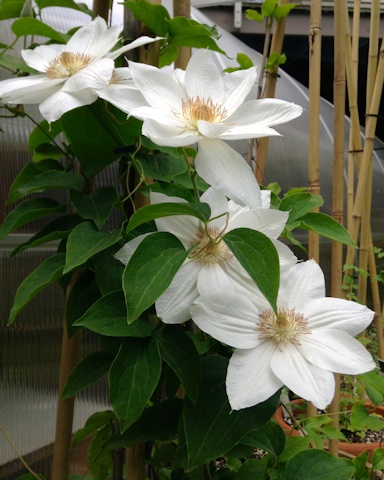 I began my research with a review of both the Jackman family chronology and the cultivar's documented history. C. 'Mrs George Jackman' was "awarded in 1873"Ref 1, so it had to have been raised some years earlier. Raised by the George Jackman & Son of Woking, one has to wonder if the history of the plant was impacted by the uproar at the 1871 Royal Horticultural Society meeting.Ref 2 Until then clematis had been allowed entry into the judging by submission and display of cut flowers. Without notice during the meeting, it was decided that certificates would not be granted to clematis represented by cut flowers as was the norm at the time. All of the Woking plants brought to the meetings as cut flowers, as they were grown in the open ground, were therefore barred from competition. Upon reading about this, my overactive imagination immediately wondered if C. 'Mrs George Jackman' was one of the entrants thus barred until subsequent years when a potted specimen in flower could be presented.

Adding fuel to my speculation are the notes that I stumbled upon regarding 1871, when a "recent brood"Ref 3 of plants raised at the Woking Nursery came into flower for the first time, the plants being the result of crossings and back crossings of C. patens with C. 'Fortunei' and C. 'Standishii' among others including hybrids. The crosses were unfortunately not kept separate, causing more general reference to the parentage than was ideal. Within the 'brood' of plants there were both early flowering plants that followed the patens genetics, as well as late flowering plants that had characteristics of some of the hybrids used in the crossings.

Noting that Mrs. George Jackman had passed away in 1840, and the elder George Jackman in 1869, one could further wonder if the cultivar had been selected and named in the last period of his life, or if indeed it was one of the last selections he made.

Regardless of this speculation, 140 years of documented history is indeed awesome, and the plant's performance in my garden nods to the longevity and beauty of this beautiful white, early large flowered clematis.

Noted in at least one reference simply as patens × lanuginosa, the parentage specifically is C. 'Candida' × C. 'Fortunei'. The apiculate sepals (8 or more on each flower) form an overlapping 6-7 inch diameter rosette, each nicely centered with beige anthers and reddish brown, sometimes furry, connectives. The plant is not overpowering, allowing the flowers to remain the focal point. Leaves are simple and ternate, medium to bright green, with leaflets ovate to heart shaped. It is an appealing package, but some of the plant's best attributes in the modern garden are related to the size of the plant as well as the consistently remontant production of flowers.

C. 'Mrs George Jackman' is listed in some sources as being 2.5 to 3.5 meters, others list it as 2 to 2.5 meters or even smaller. My experience is that the plant is compact, about 2 meters grown in ground, and when grown in a large container slightly smaller. The plant is slender here and not bushy in habit or size. Eventually, I came to appreciate the size along with the other attributes. Let's face it, if every clematis were large, it would be more difficult to landscape with them or enjoy them in containers. The plant adapts very well to container growing and blooms freely for a nice span of time. Noted as blooming "May -June, September", C. 'Mrs George Jackman' makes good on that promise season after season. In other words, it is a very dependable clematis. Early flowers feature smaller, extra sepals, which surmount the outer ones, laying flat vs. upright in what would be more of a 'double' presentation. In my garden I sometimes miss the extra sepals associated with the notation 'semi double' on earliest flowers due to early season pruning, which removes the older wood. Even with early season grooming, as I am prone to do, the plant blooms beautifully beginning in May.

I guess one could say that my culture of the plant is to treat it more like a type 3, as it also almost always ends up with a good mid season pruning to remove tired foliage and damaged stems. Regrowth is efficiently fast, allowing for later season blooms that are equally attractive as the earlier ones. 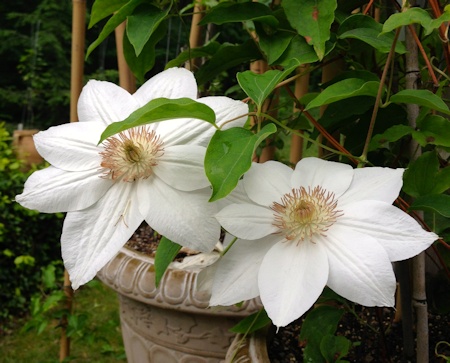 One can only easily imagine the grand gardens that this clematis has graced over a span of 140 years, the pride with which the Jackman family must have felt when the clematis was named, or even bridal bouquets adorned by the creamy white blooms. The sepals have a satin finish and subtle, textured quality, with a white on white central bar as the flower matures. Barry FretwellRef 4 described this detail rather poetically as 'creamy along the mid rib'. The beauty of the flower can be compared to the fabric in a bridal gown, which could further be described as classic with enduring appeal to generation after generation.

My admiration for this clematis caused me to search for information about its use in hybridizing. A text search on the Clematis on the Web (CotW - www.clematis.hull.ac.uk) yields no documented use of the cultivar in the hybridizing of other cultivars, nor is information found in a variety of books that I have used for research.

The George Jackman & Son known cultivars comprise a body of work of at least 106 cultivarsRef 5, in the period from 1825 through 1960. Looking at the list of named hybrids is like opening a jewel box of rarities, some of which have been lost to cultivation. The list of plants credited with parentage of their hybrids is interesting, with many plants of C. lanuginosa and C. patens genetics, as well as the expected use of C. 'Jackmanii'. One of the most prolific periods of work is credited between 1865 and 1875, during which at least 60 of the George Jackman & Son cultivars were recorded. One can easily assume that many of the cultivars named in this period were ones that the elder George Jackman influenced to some extent, with his last work taking pursuant years to go thru selection and propagation.

The era after his passing was less prolific but exciting nonetheless with the earliest record of their use of C. texensis recorded in 1890Ref 6.

The lack of documented use of C. 'Mrs. George Jackman' in hybridizing intrigued me, and last season I decided to germinate some of the open pollinated seeds from my plants. These were the first large flowered seeds that I had germinated, and they produced a radicle five months after peeling and boxing up. Now tiny but healthy seedlings, It will be interesting to see what they yield. As I nurture them, all the while I will be reflecting on the history and strengths of C. 'Mrs George Jackman', a clematis deemed worthy to be named after the raiser's wife so long ago and the genius of the George Jackman & Son body of work.