Clematis of the Month for October 2013 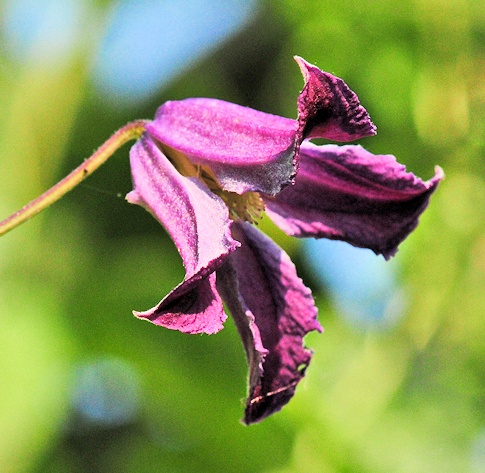 At least ten years ago I saw that a clematis nursery had a lot of special Clematis which I had not seen before. I went to the nursery because it was only 1½ hours driving and that would be worthwhile for special clematis. I was looking for special American clematis such as C. texensis, C. viorna, C. pitcheri, C. crispa and others. The plants were not in a good condition and the labels were not very clear. One of the species I bought was C. texensis. This plant grew very slow but after a few years it had the first flowers and it was not a texensis, but I did not know which cultivar. Was this an own seedling or a seedling which they had got at this nursery? Some years later I placed a picture on Gardenbuddies forum and I got the name Clematis 'Pendragon'. 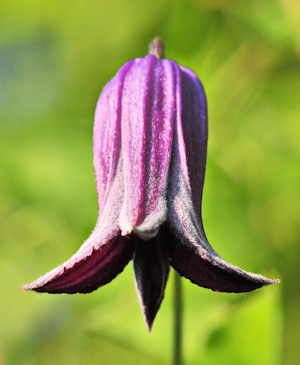 C. 'Pendragon' was raised by Denis Bradshaw, Busheyfields Nursery, Great Britain about 1993 and named by Robin Savil in 1999 after the colouring reminiscent of mediaeval pageantry and especially for King Arthur, whose family name was Pendragon. It is probably a crossing of C. crispa × C. viticella.

The flowers of C. 'Pendragon' are nodding and the color is reddish-purple. The size of the flower is about 4 cm and scented, similar to C. 'Betty Corning' but is not as strong. The plant grows to at least 3 meters in my experience.

The flowers appear from the end of July to October on new growth. The plant grows well on a sunny and half shaded position and has under these conditions the best colours. 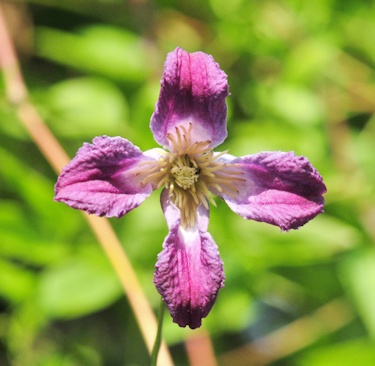 The pruning group is 3 and therefore you need to prune the plant in late winter or early spring and even later in the season depending on when spring arrives. Hard pruning keeps the plant in a good condition and rich flowering. I prune the plant back to about 40 cms every year and at the end of the summer the stems reach at least 3 m.

I have C. 'Pendragon' growing in my Laburnum anagyroides and this means I have two sets of flowers in this small tree, in spring the yellow flowers of the Laburnum and in late summer the C. 'Pendragon'. The plant gives a lot of flowers every year but this takes some years because the plant does not grow very hard in the beginning. This clematis is very useful for climbing in small trees, shrubs and roses because you can prune it down to 30-40 cm. Because the flowers have a nodding form the plant can be used in the border very well. In this situation the flowers stand out well. You can place this clematis against a wall, on a trellis or on a fence. 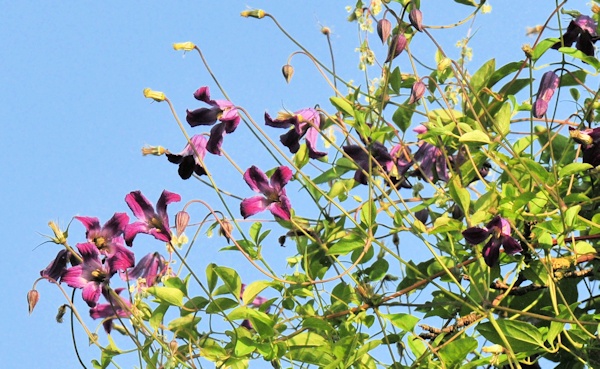 For good growing give the plant good soil and during spring and summer enough water and nutrition. During winter the plant needs a place in the garden where it is not too wet.