Clematis of the Month for December 2013 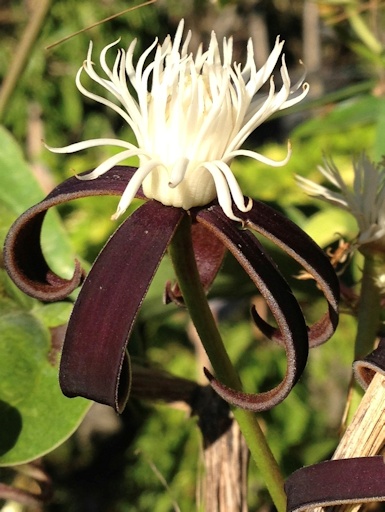 C. smilacifolia first popped up on my radar when a friend in Canada who knew that I frequently visited family in Florida, mentioned that she had contacted Lyon's nursery in South Florida about obtaining some seeds. A couple of years later I was traveling to Florida more frequently, and she again mentioned the nursery, urging me to check it out. She had been unable to obtain seeds, but the nursery's website still listed the plant. 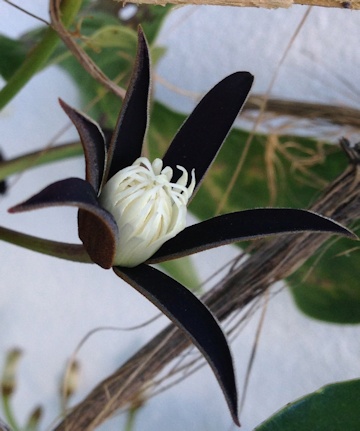 My experience with tender clematis was increasing, and I was in the process of finally installing a small greenhouse, so the timing was good. I contacted the nursery in December, 2012, and made arrangements to pick up a plant while I was in the area. No one in my family shared my enthusiasm for a long drive to pick up a plant, so just me and my iPhone GPS set out early one morning to make the trek south. When I arrived at the Richard Lyons nursery, I was amazed at the selection of tropical plants. One of the employees drove me in a golf cart to the "back forty" so to speak. There, a wooden pallet with seven C. smilacifolia plants in 3 gallon pots were displayed. I lost my breath when I saw that several of the plants were in bloom! Not only was this unexpected, the flowers were more beautiful than any photo I had seen at that time.

The plants were far removed from their homeland of Southeast Asian distribution, more specifically S and SW China, Tibet, Thailand, Nepal, Vietnam and Malaysia. The owner of the nursery was vague on how the plants initially came to his possession, but the potted plants on a wooden pallet in South Florida full sun was clearly different than the subtropical evergreen oak forests, bamboo thickets and scrub habitat that is described in Grey-Wilson. Perhaps evidence to suggest a highly adaptable plant. 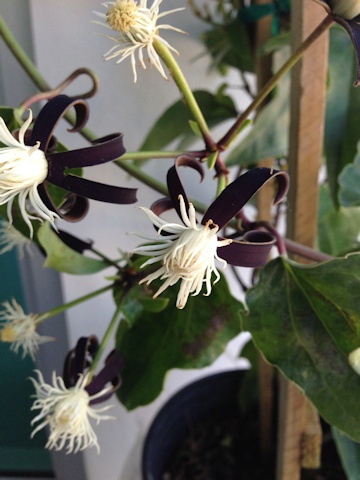 The upward-facing flowers were an absolute confection of narrow, dark eggplant-black fully reflexed sepals, which strikingly offset a fluffy, marshmallow-white boss of stamens. The stamens were in multiple rows, with the first row being the longest. These particular plants had stamens with white filaments, connectives and anthers. Later I learned there is a variety of coloration in C. smilacifolia that has been documented. In the wild, flowering time is noted by Magnus Johnson as July-October, but in South Florida the plants were in the latter stages of their blooming period in December. Despite development of fruit, none of the seed appeared to be viable. Grey-Wilson, 2000, notes a terminal inflorescence of many flowered panicles, however, no written description of the flowers did justice to the beauty before me. They were simply breathtaking.

After I composed myself from the excitement of the unexpected blooms, I selected one of the plants that had both flowers and buds. As I lifted the heavy plant into the golf cart, I began to realize that it would be quite a task to wash the overgrown root mass and pack it to travel. In addition to the root mass, the plant itself had been repeatedly pruned to the top of a 30-inch wooden trellis. Clearly I would be sacrificing most of the plant to get it back to Ohio where I live and garden.

C. smilacifolia is a vigorous liana, growing in the wild up to 10 meters (30 feet), with substantial stem diameter up to 5mm (2 inches) in the area of inflorescence and with an internodal length of up to 20 cm (8 inches). Truly an Amazon of a plant!

These plants were in full sun with most of the older leaves tattered, but the fact that it would bloom with the evidence of repeated pruning was encouraging, as I would have to keep the plant size in check to be able to grow it in my UDSA Zone 5b climate and overwinter it safely in my greenhouse. The simple, ovate shaped leaves have entire margin (up to 37 cm in length), are dark green and glossy, becoming glabrous as they mature, and can be attractively mottled with lighter green spots. 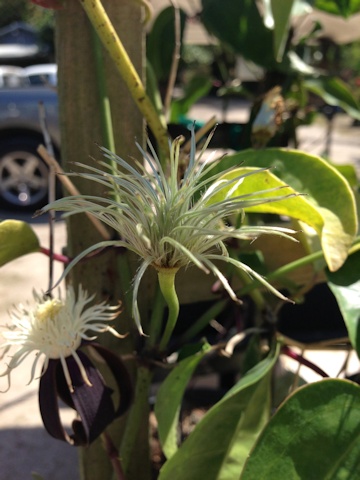 Over the next few days, the plant was placed on my daughter's patio, where I frequently snuck outside, camera in hand to take photos of the flowers, and think about transporting it home. When the time came, I quickly cut the plant down to the first internodal, unpotted it and began preparing the plant for the journey home. With repeated soaking and patience, I re-sized the root mass, placed it in damp toweling and plastic and jammed it into my suitcase. The stems I had cut also made their way into my case, to be used for striking cuttings.

Back home, I was pleased that the plant seemed to transition well and that some of the plant material was viable for cuttings. Not only an Amazon of a plant, but seemingly easy to grow.

In the back of my mind though, I started to question how I was able to leave the other six plants there at the nursery. After all, they might be the only other six C. smilacifolia plants in the United States, and they were definitely not appreciated at the nursery, labeled as "tropical clematis" , and clearly not a hot commodity within the selections of the nursery.

About this time, a good friend, Lyndy Broder expressed interest in obtaining the plant, so I hurriedly called the nursery, prepaid and secured the remaining stock, with a planned pick up in March. Lyndy was "all in" as we say in the USA, and we made plans to meet at the airport, visit some other nurseries, and pick up the remaining C. smilacifolia plants. Why do something in one trip when it can be done in two? The logic was irrelevant as we were now both in the throes of acquisition fever.

Round two was even more fun in tandem with Lyndy, with the hassle of prepping the Amazonian monsters for travel in our respective suitcases generating many laughs. Jokingly we felt we had "cornered the market" on this remarkable plant.

Back home, I realized I had perhaps gone overboard and made plans to share the plants with fellow clematis collectors, as well as making more cuttings of course.

By June, I had some large plants growing on and in my quest to know more about C. smilacifolia, I had also had been able to import another selection of the plant, with more unique, red backed leaves.

I would at this time to be amiss to not report some of the tribulations I have had with the plants. Both of the selections I now grew struck cuttings easily, which was comforting as the larger plants from South Florida were not growing on well. The plants were prone to what I call tantrums, browning off and often showing nutrient deficient leaves, but then quickly resuming growth after being cut down to the first node. Fast forward to late summer 2012. The health of the South Florida plants was still a roulette wheel, and unexpectedly, in September, the largest of the plants (the one I was hoping would bloom this fall) suddenly withered. I thought I had finally nailed the needs of the plant after experimenting with soil amendments, watering and fertilizer. I was very disappointed, consoling myself however that the clones from these plants were growing on well, and knowing that I would not give up.

A light bulb went off one day and I called Mr. Lyons, the owner of the nursery, to ask some questions about tropical plants, thinking that I might be too clem-centric in solutions I was applying to this subtropical plant. His comments, based on his considerable experience with tropical plants of all types, were valuable. First of all, he shared, it is very hard to flower tropical plants in the north, even in warm greenhouses, due to the shorter days encountered during the fall and winter months in northern climates; near the equator day length does not fluctuate as widely and there is a greater proportion of sunny days. Secondly, when he asked about how I was fertilizing the plants (reliance on 10-30-20), he advised applying more nitrogen. His planting medium was close to what I had devised in terms of peat and organic material, but he advised me to replant without the addition of the crushed granite and turface I used in the planting medium of other clematis. This week I plan to repot all but the largest of my specimens, which I assume will bloom this winter, and am extending the day with a few hours of lights on in the greenhouse. I am optimistic about his practical suggestions.

At this time, the imported C. smilacifolia selection is growing very well. . The dramatically dark red color of this selection is not proving to be a juvenile trait, as the leaves are getting darker as the plant gets older. As these leaves get older they exhibit greater silver mottling and heavier texture that I do not see on other plants. As one example, the at times reddish coloration on the back of the leaves of the C. tashiroi selection that I have in my collection, does seem to be a seasonal or juvenile phase, with the leaves reverting back to all green.

Confusion ensued when I compared the information documented in Grey- Wilson and Magnus Johnson, which detailed out up to five subspecies, to the Flora of China. I emailed my friend Peter Zale, a PhD candidate at The Ohio State University who works in ornamental plant genetic research, for some guidance, which I include here verbatim.

"Well, both are right to some degree. There is no right or wrong answer. Flora of China considers the variation found in this species to be typical of a widespread species, with no clear-cut delineation between geographic variants. Johnson was a splitter, and noted geographic variation and chose to recognize and describe subspecies. Regardless of taxonomy, the important point is that there is probably horticulturally unexplored variation in the species.".

In hindsight, as I reflect on this passion to flower these plants, I console myself that I have at least seen the plant in bloom, but my impatience shines thru this saga. Some comfort was recently found within the excellent article that was published in the 2008 edition of The Journal of the British Clematis Society. In addition to detailed descriptions of the climate, elevation and habit of C. smilacifolia in the wild, the author, Guy Sisson, mentions difficulty in flowering the plant under glass. 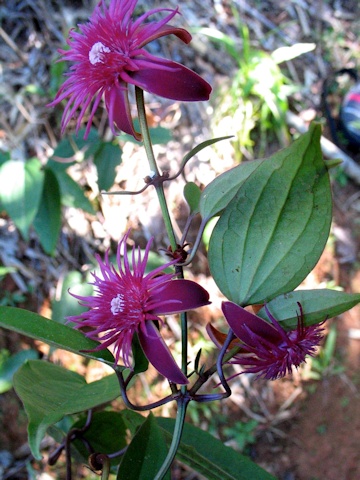 By coincidence, I was in the UK just a few weeks ago, and at Pan Global Plants I saw one of the Guy Sisson selections of C. smilacifolia, which was very similar if not identical to the selection that I obtained in South Florida. Coincidentally, while researching, I stumbled upon a photo by Nick Macer, plant hunter and owner of Pan Global, of a C. smilacifolia variant with a strong pink on pink colored flower. Just gorgeous! This much diversity had not occurred to me before seeing the photo.

My friend in Canada who tipped me off to the plants in South Florida laughingly asked if I would try to obtain the "pink on pink" selection. she knew the answer before she asked but I answered, "no I will not try to obtain it, I will obtain it, and I WILL flower all of these selections.