Clematis of the Month for April 2014 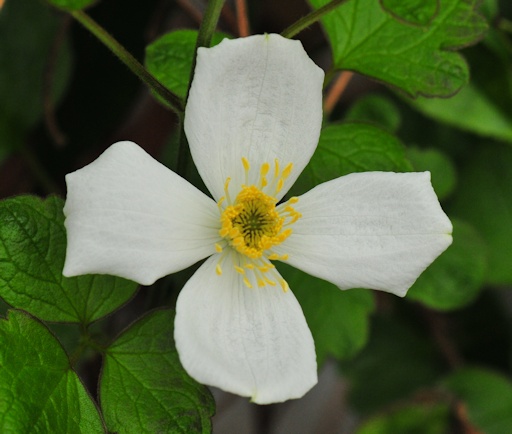 Flowering: in China April-June, in The Netherlands May-July and second flowering September-October

Habitat: Grows on stony slopes on limy ground but also among thickets and on steppes. 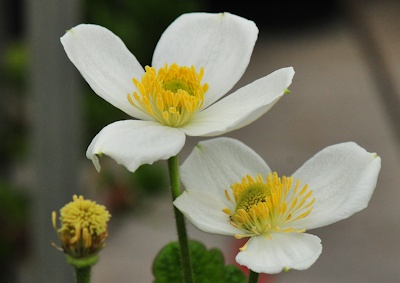 The flowers of Clematis chrysocoma are white, rose-pink to rose-purple or pink, between 4-4.5 cm diameter. The 4 sepals are spreading, broad oblong to oval but not complete flat. The anthers are yellow and this gives the flower a special look. The flowers stand alone. The flowers are generally borne on the current year's shoot. The combination of the white upright flowers and the grey green leaves give the plant something special. The flowers are from May to July and mostly I had the second flowers in Autumn. The seeds develop very well and germinate within 2 months.

If you have for the first time C. chrysocoma and the leaves start developing then you cannot miss this species because the shape of the leaves and the hairy leaves are so special and also the growing behaviour is more of a shrub clematis. The stems are very breakable.

The stems grow to 80 meters wide after a number of years but if you use fertilizer then they reach about 120 cms but never higher. Some nurseries sell 'chrysoma' and C. chrysocoma cultivar which reach at least 3 meters and the leaves are more as C. montana. In 2006 I found C. chrysocoma in Kew Gardens with the label that they have the plant from Yunnan(see pictures below).

I received seeds of wild plants from Yunnan and the seeds germinated in a short time, within one month, but after this quick start there was no more real life in the young plants. Suddenly the third real leaf came from the surface of the soil. The young plants grow very slowly and normally with Clematis seedlings you have only one stem but most of the young plants had more than one shoot. The behaviour of the young plants was more as a shrub such as C. heracleifolia from seed. The plants grew and reached a height of about 40 cm but seedlings of other Clematis at the same time were 150-200 cms and with only one shoot.

I keep the plant in the greenhouse at about 5 degrees Celsius in Winter but even under these conditions it is difficult to keep the plant alive. If it is a little bit too wet in Winter you will loose the plant. In Holland the plant is not hardy and only at places with very mild Winters you can try the plant outside on a dry spot in the garden in Winter.

During Spring and Summer the plant grows very well and getting flowers is not so difficult but I have never a lot of flowers.

Pruning is not needed, only to keep the plant in a good shape.

Cuttings can be made from not too young stems and give good results.

It was a pity that we did not find any C. chrysocoma during the I.Cl.S visit to Yunnan in 2012 to the same place where Harry Jans had previously found some plants. 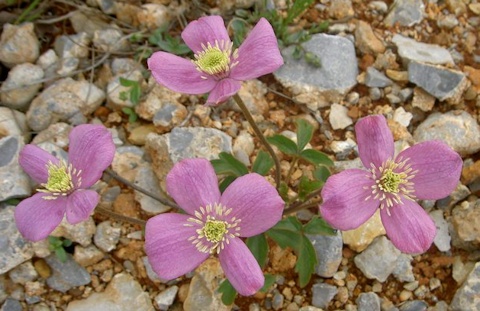 My thanks to Everett Leeds for the use of his photos, which make up the majority of images on this page.
Return to top of page