Clematis of the Month for July 2014 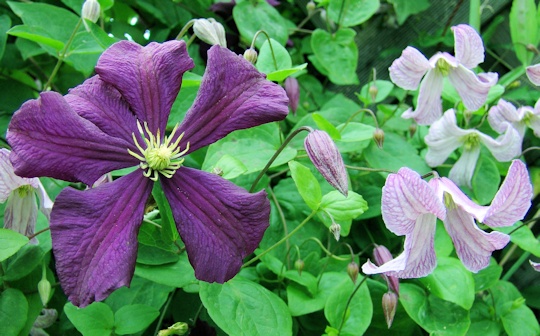 Placed in the Viticella Group and listed as a cross between C. 'Étoile Rose' and C. viticella , raised by J. Treasure in 1980 and introduced by him in 1983. I first became impressed by this plant when observing a fine specimen in Glenis and Eric Dyers garden a few years ago. This prompted me to give this plant a prominent place in our garden following some new boundary fencing work.

The flower buds of this plant are typically viticella in shape being ovoid to conical, combined with the typical twist and uneven surface texture as seen above. On initial opening the flowers are also a typical viticella open bell shape with the light pinkish sepals having a much darker and distinctive purplish pink central bar on their outer surface.

As the flowers mature they become more open with the sepals curving back on themselves, sometimes twisting in a most attractive manner. The flower colour now has faded to a most attracting creamy pink extensively veined with deep purple-pink. 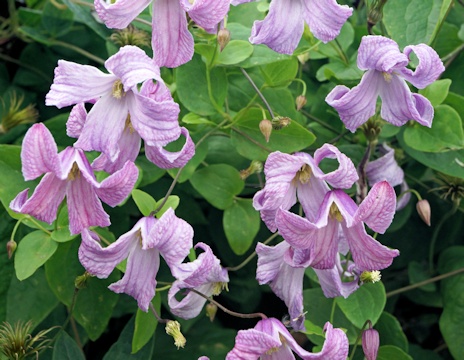 The plant quickly became established with three notable features, its long flowering period, late May to September most years and it ability to flower from its base to its ultimate height of 2.5 meters (8 feet). The third and most important is its ease of growth and maintenance. Prune it hard in late February, followed by a mulch of garden compost and a handful of Blood Fish and Bonemeal, the plant then has the ability to look after itself. No more fertilizer, little if any tying in, no pinching out of growing tips and flowers naturally dead head themselves. 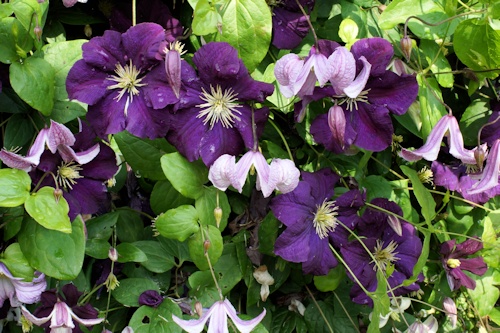 A couple of years after planting there followed what could have been a disaster with regards to colour combination. My neighbour, a keen gardener, when we were replacing the garden fence jointly decided that we would like a trellis type fence so that we could appreciate each others flowers through the boundary, my neighbour had decided to plant a clematis on her side of the fence. The clematis chosen was C. 'Étoile Violette' this clematis promptly did what it always does and grew strongly to the top of the fence and then cascaded down on our side. What a combination ensued with the pinkish purple of C. 'Pagoda' enhancing the flower power of C. 'Étoile Violette'. As it has turned out I could not have planned a more striking colour combination which is shown in the following illustration. 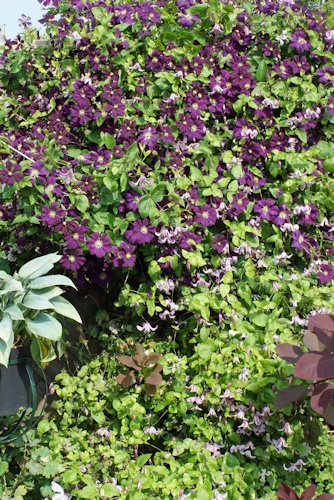