Clematis of the Month for March 2015

My thanks to Linda Beutler for the photos, the first taken in 2010, the second, with a golden berberis,
taken last year (2014) in the Founder's Garden at the The Rogerson Clematis Collection at Luscher Farm, West Linn, Oregon, USA. 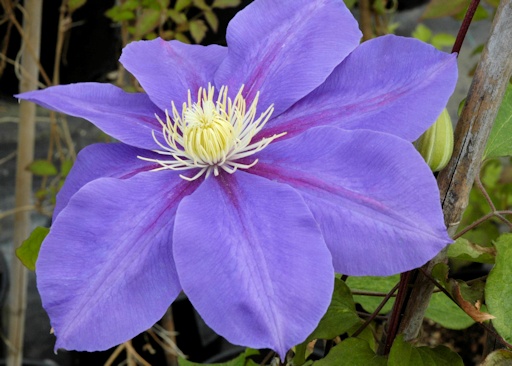 Until recently there were few clematis on the market that were bred in America. The current interest in U.S. species had not yet taken off, and virtually all the large-flowered hybrids that were the substance of the trade were long-familiar imports that originated in England. American growers, lacking a tradition of their own in breeding the plant, found it easier from the start to depend simply on propagating a relatively small corps of proven winners from cuttings, and that unfortunately became the standard practice, reducing what was available to the same set of cultivars year after year for decades. Even when a new name appeared in a grower's list it was likely few nurseries would take a chance on it. Said one all-too-typical nurseryman back in the 70's, "All I need is a red, a white, a purple, and 'Nelly Moser.'"

Of course that is not quite the whole story. For decades in various parts of the country an occasional grower would develop an interest in clematis and add a few fresh names to the conventional list. Luther Burbank is one who introduced several new cultivars, but all vanished quickly. As with most others the market was simply too weak to sustain any but very local attractions, so as a result all we have of most of the mid-century American introductions is their names. It took the "Clematis Renaissance" of the 1980's and -90's to change that. Growers now are far more likely to take a flier on offering clematis of their own raising than they used to be.

Against this background consider one outstanding American hybrid that we can trace with confidence back to the 1960's, though for much of its lifetime it was missing from the trade. Fortunately it was preserved in a private collection, and is now becoming available again in small but increasing numbers. Meet C. 'Duchess of Waverly.' 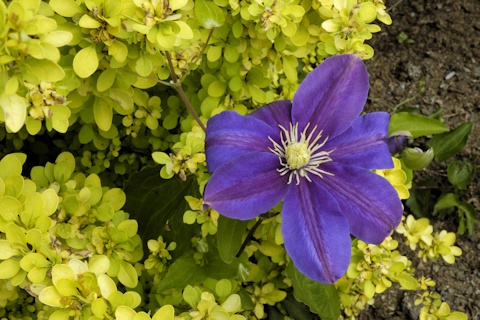 The plant is a Spring-bearing vine, sturdy and capable of spreading well at the base. It will normally grow to 8'-10' and should best be cut back firmly at the close of Spring bloom and fed to encourage a later flowering on the new wood.

The spring blooms typically will have 7 to 8 sepals whilst the flowers following on new wood usually have 5 to 6 sepals. They have an impressive creamy white eye. The sepals can be loosely described as purple, like so many other large-flowered hybrids, but what is remarkable about this one is the way its colors change throughout its three to four weeks of bloom. It is no ordinary pattern of waxing and waning.

The buds are likely to give promise of a red flower, and the sepals are suffused with that vivid red as they begin to open, especially down the middle, but as they open fully their color proves to be a deep violet-purple. Soon there is not much red left except for a faint midrib, and as it goes the purple fades also, giving way to violet and then to one shade after another of blue. What makes this process absorbing is that the bloom doesn't come on all at once, but spreads out over many days, so that various stages can be occurring side by side. Almost to the end there are little glints of red, as late buds begin to open.

A valuable cultivar, and it may yet re-surface in the trade. It seems we lost it simply because the one known source-Arnold's Clematis nursery in Milwaukie, Oregon-went out of business in the late 70's, and whatever remained of its stock was dispersed for whatever it would bring.

It was surely the last owner, Mrs. La Verne Bybee (formerly Arnold) who gave the plant its name. She made a point of offering what she called "Northwest introductions," and had perhaps nine or ten in her list, though which of these (if any) she might have raised herself we do not know. We do know that she had a liking for the aristocratic names of many of the English clematis she had carried for years, and tended to confer a comparable nobility or at least gentility on the plants she introduced. In her list were two Kings, three Duchesses, a countess, one Lord, and seven Ladies, including a 'Lady La Verne.' Of her duchesses, two were long-established, 'Duchess of Edinburgh' and 'Duchess of Sutherland.' The third was our 'Duchess of Waverly.' It is no great stretch to imagine who named the plant. But why Waverly?

In Mrs. Bybee's day Waverly was one of the large real estate divisions known to Portlanders as "neighborhoods," some of the names still highly visible, others almost gone. It might be hard to find Ivanhoe these days, but Waverly is still a familiar name in the area, and that is where the Arnolds had their nursery. What better than to give it a Duchess?

My own first meeting with the Duchess occurred in the late 70's, at what was then known as the University of Minnesota Landscape Arboretum, where I was kindly allowed to take cuttings. I drove home with them to Kansas through scorching July weather, and somehow two or three of them survived. A single cutting made from one of them grew and prospered in my keeping for more than twenty years, until it was carefully divided to create additional plants. We owe the continued existence of the cultivar itself to the vigor of that single cutting. 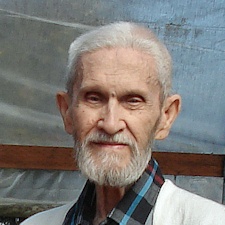