Clematis of the Month for May 2015

My thanks also to the Dutch nursery, Jan van Zoest, for the first picture (below). 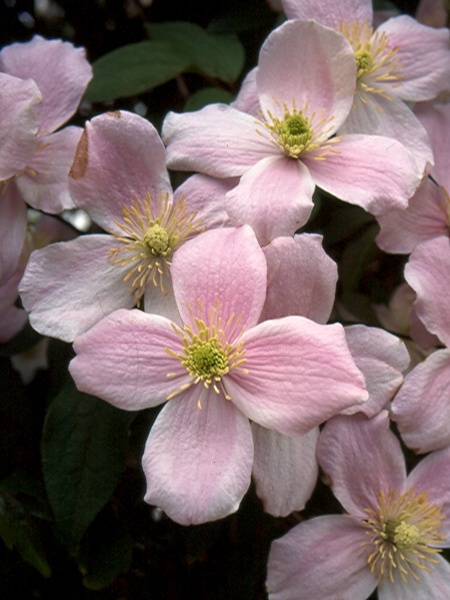 Like many clematis lovers, growing Montana group clematis was one of my dreams. I soon learned that my zone (noted as 5b in those years) was not hospitable to growing these clematis. When I saw clematis labelled as "montana 'Pink Perfection'" at a local nursery and stated as hardy to zone 5, I excitedly purchased it and promptly planted it out to grow upon a large ash tree.

In the early years, I cosseted the plant, wrapping it in burlap each winter until the size of the plant made this impossible, not to mention a winter eyesore.

The plant grew well, bloomed ferociously and looked great for a few months of the year. We had some warm winters, and my eventual inability to continue the winter burlap due to the size of the plant did not deter the early spring growth on the vines. As we built retaining walls and landscaped, we worked around the tree it grew on rather than remove it, all because of my precious clematis. 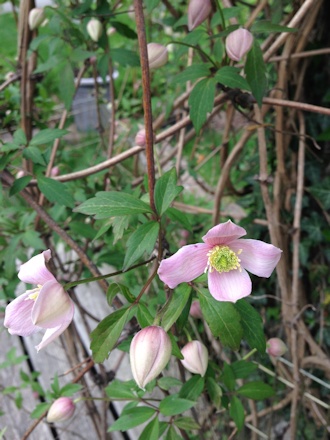 As I got to know more knowledgeable people in clematis, I proudly told them of my Montana 'Pink Perfection'. Then I learned from Ton Hannink and Wim Snoeijer that my plant was not the true C. montana var rubens 'Pink Perfection'.

After Ton visited my garden, I changed the metal label on the plant from 'Pink Perfection' to 'pink Chinese hybrid montana'.

Eventually, I wanted to understand the differences in my plant and the true C. montana var. rubens 'Pink Perfection'.

The true C. montana var. rubens 'Pink Perfection' hailed from George Jackman and Sons at the Woking Nursery Ltd. in the early 1950's. It is noted simply by Johnson* as a 7 to 10 meter, vigorous liane. Flowers fragrant, deep pink to rose color, fading as the flowers matures, 5 - 6 cm, well formed deep pink to rose color with yellow anthers.

We can also assume that the genetics of the plant originate from the rose colored montana selection brought into Europe in the early twentieth century from western China by Ernest Henry Wilson**. Prior to this the wild Montana forms and specimens were nearly always white and were found in the Himalaya and southwestern China. Wilson's pink specimens were later described as C. montana var. rubens, and opened up the possibility of hybridizing to produce a greater range of colors and perhaps hardier cultivars.

My "not Pink Perfection" demonstrated the early bronze leaves, but there was an absence of fragrance and a subtle difference in the coloration of the flowers. Wim Snoeijer is my go-to source for botanical questions reduced to terms I can understand. He provided this explanation of the difference in the 'Pink Perfection' more commonly sold in the trade to the authentic clone.

The real 'Pink Perfection' has 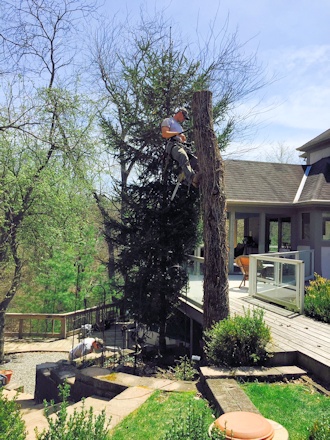 After some years, the tree my plant grew on died, along with 16 other huge ash trees on our property, due to the regionally unstoppable infestation of the emerald ash borer. Instead of removing the tree, I had the tree crew just top it. Now I had a huge trunk serving as a pole for the plant that looked good a few months a year in an awkward spot.

By this time, we had been declared a zone 6b, and I had ventured into other Montana clematis, finding warmer spots on the property to try them. Most proved not fully hardy in the locations I planted them in. Even if the plants were not lost over winter, all the older growth would be, so I rarely flowered them. I continued to replace them and try other Montana selections and cultivars, but none established as well as my "not Pink Perfection" plant.

The winter of 2013-2014 was the harshest ever here, with the term "polar vortex" becoming part of the vocabulary. My late winter check of the big pink Chinese montana hybrid showed some vines that were green inside. However, as spring rolled on, it was apparent that all of the vines were dead - all massively tanged 25 feet of them. By the time I gave up on growth emerging from the vines, there was vigorous new growth from the base. I nostalgically chose not to prune off the damaged old growth, instead viewing it as a framework for the new growth to climb on. This means that I had a season of new growth steadily covering the old growth, with no flowers. Not the finest display in the garden.

By the end of the summer of 2014, the new growth finally reached the top of the old vine. At that point, I realized that the growth was so new it would probably not overwinter to produce 2015 flowers. When spring this year showed my prediction to be true, with no buds breaking on any of the vine, I finally made the decision my husband had been waiting ten years for me to make. I would remove the tree trunk and the montana.

Post script ..... My journey trying to grow montana hybrids and species selections continues in more seemly spots on the property. A handful of plants overwintered last year with burlap and are establishing while I wait for those warmer winters that will allow me yet again to know the joy of spring flowering of Montana clematis.