Clematis of the Month for July 2015 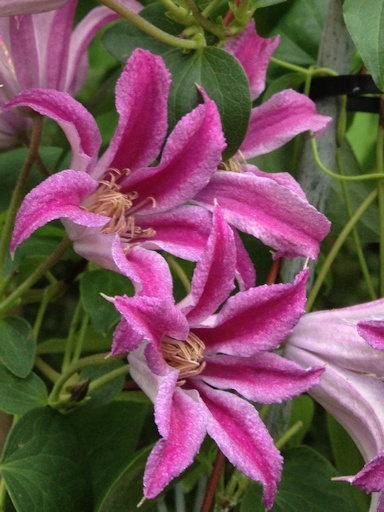 This month's clematis of the month is Barry Fretwell's C. 'Peveril Profusion'. To those of us in the USA in the late nineties and into the following years, most of Mr. Fretwell's plants were amazing plants we read about and saw photos of, but had no access to through the usual trade channels. One of the plants we became aware of and lusted after was C. 'Peveril Profusion'. Speaking for myself and other clem-friends, Mr. Fretwell was THE iconic breeder bringing different forms, color and diversity to the genus.

Once my collection had encompassed virtually every plant available in the USA, I broadened my horizons and obtained an import certificate, determined to build a world-class collection of clematis. Importing was my only option to continue to secure accessions. The joy I experienced when C. 'Peveril Profusion' was confirmed as part of my very first import could only be likened to obtaining jewelry or some other coveted luxury. 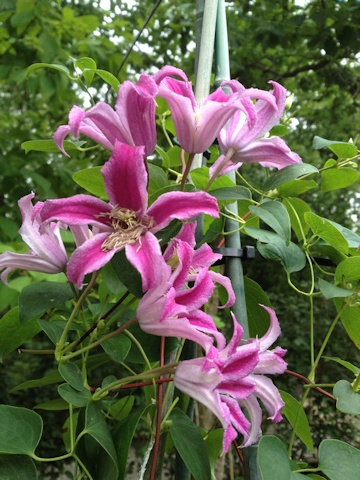 During this period anything labeled or named as texensis was especially lusted after. The colors and shape of the flowers offered a diversity that no other genetics offered. At this time, my forays into understanding and collecting native North American species plants had not begun, nor had my fascination with plant parentage. It was enough at that time to know that it was a texensis hybrid.

I have often fantasized about being a fly on the wall in the laboratory of Francoise Morel as he worked with the exciting form and color of texensis and pitcheri as early as 1868. Referencing the Peveril Clematis website, I learned that Mr. Fretwell was hybridizing with texensis from at least the early 1990's, following an absence possibly of over 100 years since the plants were described in 1888 in the Revue Horticole.

As I began writing this article, I took an off chance that perhaps some additional information could be solicited from Mr. Fretwell himself. I contacted his North American agent, Pride of Place Clematis, by email, asking if any information could be obtained for this article that was not published in the usual resources. A quick response that they would try to obtain some was encouraging. I was surprised and thrilled just a few days later, when I received some information that was a direct response from Mr. Fretwell. It included some detail for the article that may be to date unpublished. A second e-mail contained information from Mr. Fretwell that I felt privileged to receive, especially as the request and information was based on the fact that it was research for publication, meaning that I would be able to share it in the article.

The first information that I received mirrored the published basics with flower size 4-6 cm, no seed heads, height 200-250 cm, width 60-90cm, pruning group 3/C, noted as good for container culture, position (east, south or west), winter hardy, no scent, 7-9 flowering months, origin Great Britain, 2004, breeder Mr. Barry Fretwell. While none of my direct experience differed with this except for accounting for climate difference in the number of flowering months, it was still interesting to receive this right from the source.

The direct information I received continued with the following, which I have cut and pasted below.

"Described by Barry: a differing version to join this select branch of the clematis family. The six-sepalled flowers of this one are smaller than average - opening out quite quickly into this pretty, informal shape. More flowers too are produced - over a very long period - giving a continuous show throughout the summer.

Very distinctive, the colour is certainly not to be confused with any other; deep plum-pink with a lighter pink edging, which changes to silver-pink - and with attractive complementary pink stamens. 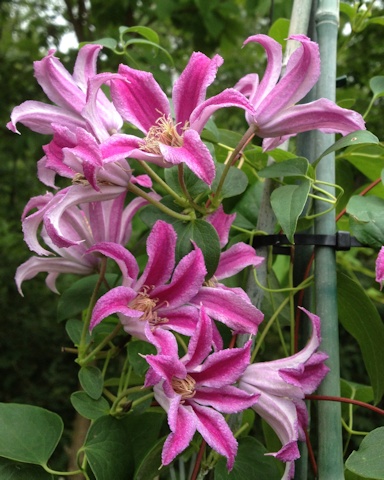 This information is consistent to the information in The International Clematis Register and Checklist, 3rd Supplement , as well as the Clematis on the Web listing.

In my own garden, I happily grew C. 'Peveril Profusion' in a giant container for more than 5 years, but was thwarted with the harsh winter of 2014 and the demise of my two plants. I have since replaced the plants, as I consider the plant a must-have. I do not think my loss of the plants was a remark on their hardiness, but rather that I held them in the display containers too long and denied them the in-ground position they deserved. The flowers are quite substantial and long lasting. The anthers can look a bit ratty as the flower lingers on, as the sepals are still brilliantly colored and the flower intact for a long time. That is a small criticism against all of the other attributes of the plant, including the abundance of gorgeous flowers that it gives freely over many months in my zone 5b/6a climate.

In researching for this article, I noted Mr. Fretwell's comment on Peveril - 30 years at the peak, the website of cultivars raised by Barry Fretwell at Peveril Nursery, that C. texensis "was a rare and difficult species to grow, but its progeny, however were among the most amenable clematis to grow".

At the time that I obtained C. 'Peveril Profusion', I recall that my mindset was that texensis hybrids were rather difficult to grow. At this time I was not yet growing species plants and the learning curve of how easy texensis was to grow in North America was yet to come.

I did find that C. 'Princess Diana' was easy to grow, as was C. 'Duchess of Albany'. I found C. 'Sir Trevor Lawrence' see Note 1 and C. 'Gravetye Beauty' somewhat more difficult to grow, and C. 'Lord Herschell' quite a challenge. I will note that when I subsequently obtained and grew C. 'Lady Bird Johnson', it also exceeded expectations and matched Mr. Fretwell's statement about the progeny of C. texensis being amenable to grow. At this time however, C. 'Peveril Profusion' was a game changer for me, as it was quick to establish, floriferous, remontant and a quite manageable size plant, which I view as a major advantage.

It must take a lot of confidence for a breeder to put the name Profusion as part of the name of a plant, since so much is in the hands of the grower, the climate and the garden situation. Mr. Fretwell's confidence was not misplaced with this cultivar, as it truly does have a profusion of flowers.

I was soon thrilled to receive a second email, which was passed on directly from Mr. Fretwell, and received on the same day sent, June 24, 2015.

'Peveril' is the name of a landmark castle in my home area of the 'Peak District' located in the county of Derbyshire, central England.
'Profusion' relates to the generous amount of flowers produced.
Parentage: 'Peveril Pearl' × texensis × versicolor hybrid.

In conclusion to this article, I will say that C. 'Peveril Profusion' is a happy plant - the color and distinctive flower form following the pollen parent's genes. The foliage of the plant speaks to the seed parentage, with medium green, simply arranged leaves that have no hint of the glaucous coating or tendency to mildew associated with texensis. C. 'Peveril Profusion' is a plant that gives much more than it takes, and makes you smile over and over again.

Note 1:   Mr. Fretwell is credited with bringing 'Sir Trevor Lawrence' back into cultivation and availability, which can be read about at http://peverilclematis.site.

[Editor's Note: At the Constitutional General Meeting of the International Clematis Society in June 2015, held during our meeting in the West Country of Great Britain, the membership voted to give Barry Fretwell a Golden Clematis Award. You can read the citation by following the link.