Clematis of the Month for October 2015 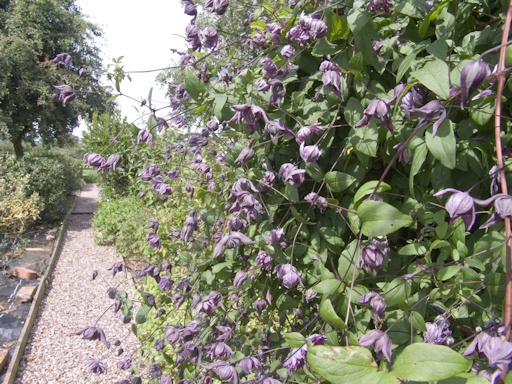 The well-known British nurseryman and breeder of clematis, being responsible for the introduction of many cultivars, Barry Fretwell, was involved in getting this double flowered Clematis viticella into cultivation, this plant having been pointed out by a customer, growing in a garden. Obviously cuttings were taken and it was brought to the market in 1982, the year that the Tudor battleship Mary Rose which sunk in 1545 was raised from the depths of the Solent (Southern England). The plant was named after this ship. The name Clematis viticella 'Flore Pleno' was subsequently given to this plant because it was assumed (but not proven) that it was the original plant that was described by Linnaeus. The name 'Mary Rose' is still used in the trade though.

It appears that during the 16th and 17th centuries there were double flowered forms of C. viticella , blue and violet-purple, named either var. 'Pulchella' or even var.'Multiplex'.

It is interesting that Magnus Johnson in his book Genus Clematis, under the entry for C. viticella 'Mary Rose' he states "See 'Pulchella'".

Appearing in the English Garden publication in 1979 is a coloured picture by Margaret Mean 1789 under the name C. purpurea. Magnus Johnson cites that this is possibly the same form that Barry Fretwell renamed C. viticella 'Mary Rose'. 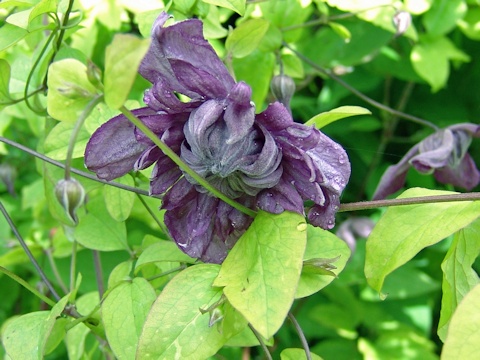 It was suggested to me this summer 2015 that C. 'Purpurea Plena Elegans' and C. 'Mary Rose' are the same plant. It is clear to me that they do have certain differences, but it is possible that Botanists could make an argument for placing them under the same name. 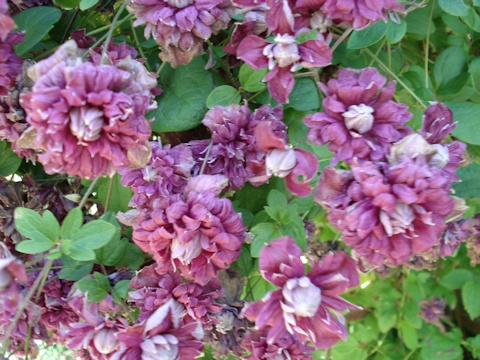 In The International Clematis Register and Checklist 2002, C. 'Purpurea Plena Elegans' and C. 'Flore Pleno' are listed as different plants. The name C. 'Flore Pleno' is cited as dating back to 1753 and before, but according to my recollection and other literature the name cannot be clearly associated to this plant as there seem to be earlier names. The association with the named plant C. 'Mary Rose' is certainly unconfirmed as the Checklist states that the link to the earlier double flowered form is only "probable". Anyway in my opinion C. 'Mary Rose' is a much easier name to deal with. 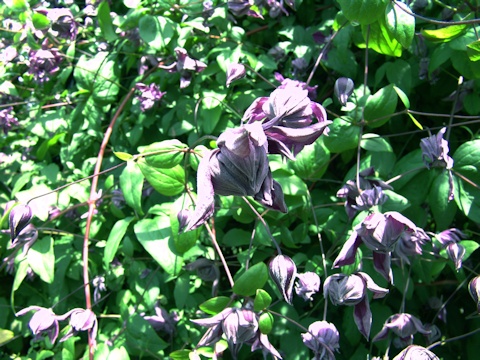 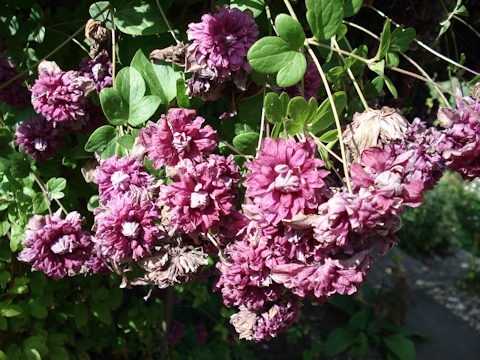 Similarities/differences;
Both plants are of similar vigour as C. viticella and flower for a similar period of the year (June to August). Flower size is similar, but C. 'Mary Rose' is a dark shade of purple (I liken the colour to Welsh slate) RHS 90B, whereas C. 'Purpurea Plena Elegans' is a light purple, almost red RHS 70B. The main difference though is that C. 'Mary Rose' flowers fade away gracefully, dropping all their sepals onto the ground where they can be swept up, whereas C. 'Purpurea Plena Elegans' flowers die disgracefully by hanging onto their sepals, requiring the gardener to dead head throughout the flowering period. 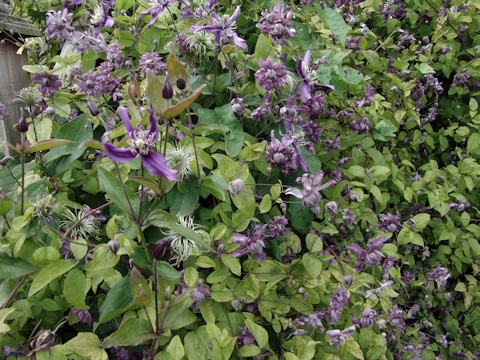 C. 'Mary Rose is a clematis that deserves a position in any garden, but its flower colour needs to be enhanced by growing in combination with another clematis or even a carefully chosen climbing rose. I have seen it grown successfully with the yellow flowered C. 'Kugotia' GOLDEN TIARA. It also combined successfully for many years in our garden with Rosa 'New Dawn' 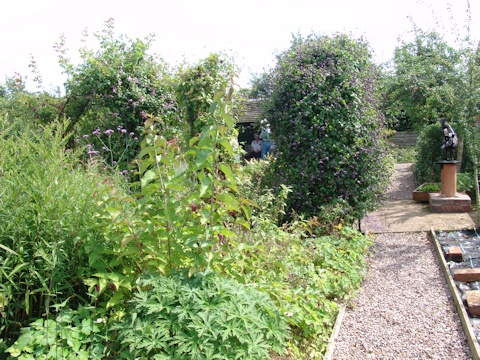 C. 'Mary Rose' at a distance. This is where a contrasting flower colour combined would make all the difference.