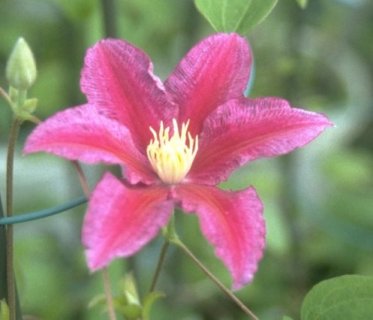 Clematis of the Month for September 1998

For most of us, especially those who live in areas with overbearing summers, this is the season when one of the great pleasures of gardening with clematis comes round again -- the second flowering that the Spring and early summer hybrids mount toward autumn on their new wood. It is a time when the accent is on variability, and hence discovery: most of the doubles put on their single form at this season, the familiar Spring cultivars often come up with flowers smaller or simpler than those on their old wood, and the barred varieties are likely to produce quite a range of altered shapes and colors. (Put fifty 'Nelly Moser' or 'Dr. Ruppel' plants in late bloom together in one place and it is remarkable how few of them can be confidently identified at that season.) Such variations are all the more interesting because they depend in good part upon long-range patterns in the weather, and so may not be at all the same next year.

One barred cultivar that tends to change relatively little between its early and late crop is newcomer 'Red Pearl.' The main variation is perhaps in the breadth of its intensely red midrib, and there may be a little less overlap in the late blossom. In both seasons the flowers may have varying numbers of tepals (usually six or eight), always symmetrically disposed around that bright yellow-cream eye. Close up, the lavender margin is fairly prominent, but at a distance it is barely seen, serving instead to telegraph the intense red, which seems not so much a bar as the dominating color of the flower. 'Red Pearl' hence becomes a challenger for the title of reddest of the red (along with such others as 'Allanah' and 'Sunset' and the well-loved 'Niobe').

It is of compact habit, likely to top out below 2 metres (5' - 6'), and amenable to container-growing or a wide range of possible hosts. It profits from a light grooming at the close of its Spring bloom, and also from the hard pruning of a stem or two once there are several, so as to encourage new growth close to the base.

'Red Pearl' was bred by Kozo Sugimoto in the mid-1980s, and has only recently become available outside Japan. (Visitors to this site may recall reading that the Sugimotos' nursery was the final stop, and a most enjoyable one, on the tour that followed last year's Tokyo meeting of the I.Cl. S. ) Others of his clematis that are now making their way into the international trade are 'Kasugai,' 'Toki,' and 'Frau Mikiko,' an exceptionally fine purple named for his wife.