Clematis of the Month for February 2016 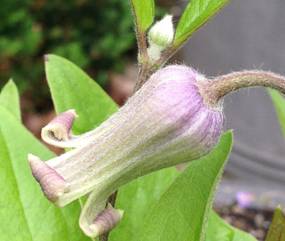 It's February and my garden, like many in North America, is still dormant, with the first hints of spring yet to be revealed. One of the plants in the garden that I start checking early, as winter gives way to spring, is C. 'Murasaki no Ue'. It is one of the earliest herbaceous clematis to push up new growth in my Zone 5a/6b garden.

I bought my first plant as soon as it was available in the USA, from Joy Creek Nursery in Scappoose, Oregon. Like many clematis collectors, I covet all of the beauties from the hand of Mr. Ozawa and the Chikuma family. Collectively, they have brought to market considerable variety in form, color, genetics in unique and garden worthy plants.

C. 'Murasaki no Ue' was flowered and selected as a seedling by Mikiyoshi Chikuma in the year 2000, and following that, named, and introduced in 2006, and finally registered in 2008. In preparing to write about C. 'Murasaki no Ue', I sent an inquiry to Mrs. Chikuma for any additional information. Fortuitously, as Maurice Horn was visiting Japan at that time, Mr. and Mrs. Chikuma gave him information that has not been published before and asked him to relay it to me. 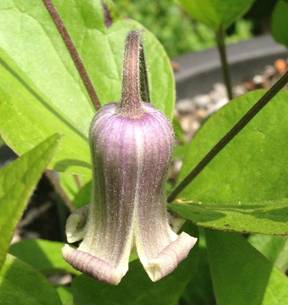 In the period that C. 'Murasaki no Ue' was selected, the Chikuma's were sorting through hundreds of seedlings that had been selected by Mr. Ozawa, and eventually left in their care before he died. In addition to this, they were raising their own hybrids and selections. One can imagine the plethora of precious plant material in their possession, as well as the challenge of organizing it all, selecting and following through with plant releases.

The parentage of C. 'Murasaki no Ue' has always perplexed me, and still does even after receiving the seed parent identity. It is recorded in their unpublished records as a seedling of C. addisonii, with the pollen parent unknown.

The flowers have a slightly elongated form, and are of quite variable coloration in my garden, depending on the time of the year. The plant is remontant, recovering quickly from hard cuts, and needing little encouragement to commence growth. The form is an overall teardrop shape, with the sepal length of about 3 cm, and 1 cm in width for a total flower width (4 sepals) of 1.5 cm. The tips of the sepals strongly recurve, and often show crimped margins. 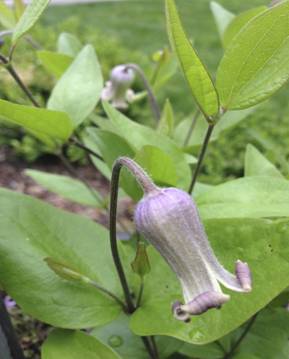 The coloration of the sepals is best described as grayish purple on the outside and pale green with a grayish purple stripe on the reverse. Pale green stamens and creamy white anthers complete the spring-like color palette. This description however, does not do justice to the variation ranging from subtle spring nuances of green and purple (similar to coloring on early C. fremontii flowers), to even more jewel like tones that you will see in various times of the year that the plant may bloom.

The foliage is a spring green color, with somewhat elongated leaves and entire margins in a simple arrangement. The leaves are not glaucous. One of the traits of the plant is a tendency of the foliage to become blemished and discolor, at times to the point of disfigurement. Last summer, I stumbled on some relief for the foliage discoloration. I found that by spraying the foliage before the discoloration begins and repeating the spray every couple of weeks with an anti-transpirant See Note 1 product the blemishing on the leaves was virtually eliminated. The only other herbaceous species clematis that I grow that demonstrate this extent of discoloration of leaves are C. socialis and C. baldwinii. While there is no verification of regarding baldwinii being used for breeding in Japan at this time, documentation of C. socialis being used in Ozawa's breeding program is as far back as 1994 when the selection or hybrid C. 'Little Belle' was named. While the foliage of C. 'Murasaki no Ue' is not reticulated, the elongated form of the leaves and the flowers somewhat remind me of C. reticulata. It is interesting to note that C. reticulata was used in the breeding of acclaimed Ozawa hybrid C. 'Rooguchi' and the newly released C. 'Rooguchi 2'. 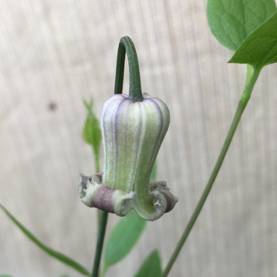 The sprawling plant's mature height is 40 cm to 60 cm, making the plant perfect for the front of the border, or a container grown specimen. I grow C. 'Murasaki no Ue' in the garden, and I also like to have one in the greenhouse over winter, then placing the container in the garden for the summer.

The bloom period is listed as April through September, which is true in my garden, but intermittently, due to the number of times I cut it hard each season.

The early flowering along with the beauty of the flowers, the remontant productivity and manageable size of the plant make it a clematis I highly recommend growing in your garden or keeping in your collection of specimens.

C. 'Murasaki no Ue' is named after a character in "The Tale of Genji", (Genji monogatari) written by Murasaki Shikibu, early in the 11th century. The word Murasaki also refers to the color purple, and the Chikuma's have used this name because of the color it implies and because of the mood it conveys to Japanese gardeners and flower arrangers.

Note 1: Anti-transpirant products slow down the transpiration of the leaves, allowing them to retain moisture. While most often used for winter protection, anti- transpirants also protect leaves from fungual contamination and sunburn. There are several brands on the market, I use Moisturin, available in the USA at wellplant.com.