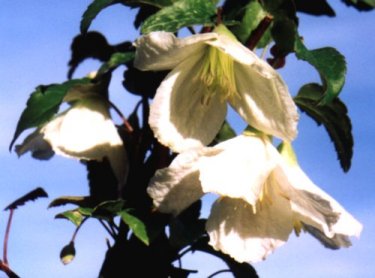 Clematis of the Month for December 1998

This is the third time a "cirrhosa" has figured as Clematis of the Month, but we doubt that any viewer who has watched as late autumn drained the spirit out of a garden will tax us with undue partiality. What a time of year to be putting up cheery new flowers! And yet that is what this winter-flowering species does. It can be a tower of blossoms in its southern homelands around the Mediterranean, reaching a height of as much as 30' (10 metres) and very broad spans at the base, and though in colder regions it needs some protection to reach 15' and is usually content with less, bloom is still abundant and long-lasting. The most accessible forms appear to be hardy in all regions of England and in North American Zones 7-9 (in some microclimates even Zone 6), if given that fixture of gardening books which is so much more readily encountered in England than in the New World, a warm wall. The time of bloom and the length of season vary, naturally, with the climate, and also from one cultivar to another; about some of these the jury is still out, for several of the most interesting cirrhosas are only just beginning to be known to a wide gardening public.

Take 'Jingle Bells,' for example. This cultivar is barely past its introduction, and first observations of it suggest that it may be somewhat more cold-tolerant than others. Bred by Robin Savill in 1992 from seed of the popular cirrhosa 'Freckles,' it was released to an eager English market in time for the Christmas season of 1995, and has prospered. So far, however, only a few plants of it have traveled abroad, and those are too young to have demonstrated their full pattern of growth. What we know from English experience is that the plant is very like 'Freckles' in most ways, except for the rather startling fact that it has no freckles. The foliage is similar: leaves are mostly simple, slightly toothed, and of a glossy dark green. The blossom is equally large, or even larger, and has the same papery texture. And the period of bloom appears to be about the same, starting in mid- or late autumn and going on at intervals until the earliest "Spring" clematis have started into flower. Where 'Jingle Bells' differs most from 'Freckles' is in the color of the blossom: creamy in the bud, pale yellow at first opening, and pure white later on -- a welcome new accession to this handsome species.

('Freckles,' by the way, is proving to be an interesting parent. Appealing in its own right, this red-speckled cultivar bred by Raymond Evison has already been used by Alister Keay of New Zealand in the breeding of another outstanding plant with a solid red interior, 'Lansdowne Gem.' It seems likely that other growers are already taking the hint. For that matter, someone is probably working at this moment with 'Jingle Bells.')

Suggestions on the care of the cirrhosas may be found in the two previous "Months" that feature them.

A note on our sources: the only specimens of 'Jingle Bells' accessible in the U.S. being still infants, it was imperative to call in our stalwart spies in the U.K. to flesh out this report. Our Hon. Secretary, Fiona Woolfenden, found and photographed the specimen above at the nursery owned by Sheila Chapman, and verified with her some of the details of the history. By good luck Fiona also had the chance to talk with Robin Savill about the origin of the plant. Our President, Malcolm Oviatt-Ham, sent much-needed information, and included a characteristic nicety on the color of the flower--pale yellow, yes, or "better described as buttermilk." Thanks to these worthies for their timely help.