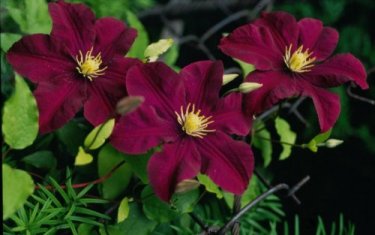 Clematis of the Month for January 1999

No, this clematis does not bloom in January -- except for dwellers in the southern hemisphere. We are borrowing it from June, so as to launch the New Year with a cultivar that could arguably challenge for "Best of Show" in almost any competition. Introduced to the English-speaking world in 1986 as 'Warsaw Nike,' it was scarce for several years and is not widely available even yet, but growers have begun taking it to heart that nearly every gardener who has seen it in bloom wants one.

The attraction, apart from the sheer reliability of the plant, is the depth of colour and velvety texture of the flower. There must be a hundred gradations between purple and red amongst the large-flowered hybrids, but only a few are so distinctively caught by individual cultivars that we feel we can tick them off by name -- the 'Maureen' colour or the 'Gipsy Queen' colour. 'Warszawska Nike' is one such, with its own recognizable shade of deep reddish purple. (Ironically, it may be necessary to scale back the red mentally when viewing our picture, since photographs tend to register clematis purples as redder than they appear to the eye.) The flowers, varying from 5" to 6" (12-15cm.), are of a slightly billowy star-shape, but with tips curling back so as to appear rounded, and have a faint, smooth track of red in the bar area; underneath, the sepals are silvery gray. Not very conspicuous at first, the yellow anthers make a good contrast when fully expanded. The plant is likely to be listed with a B/C for pruning, because it can be treated two different ways. If it is cut back sharply during the cold season, bloom will wait for the new wood, commencing probably in midsummer, and go on for a long time. If it is left with some of the year-old wood in place, it will normally bear flowers in late Spring, and (preferably after a bit of grooming) will flower again when the hottest weather is past. The Spring flowers are likely to be somewhat larger, but the summer ones make up for that in abundance. One suggestion about a site: the flowers being quite dark, they show up best in association with light-colored foliage, or a light-colored host.

'Warszawska Nike,' named for the Greek goddess of Victory ("NEE-keh") is one of an impressive series of hybrids bred over many years by Brother Stefan Franczak, a Jesuit monk of Warsaw. His reputation spread to the West when the Fisk Clematis Nursery began introducing his work in the late 70s, and over the years others of his clematis came in through that same channel -- 'Jan Pawel II,' for example, a creamy-white cultivar touched with pink, which arrived in England just barely in time for its first bloom to coincide with a visit from the Pope. Under that name or the English form 'John Paul II' it is at present one of the most widely available of the Franczak hybrids. Others are the magnificent deep reddish-lavender 'Kacper,' a quietly beautiful pale blue called 'Sympatia,' the dramatic deep red 'Monte Cassino,' and a fine lavender-blue called 'Jadwiga Teresa' that may provide a news item any day now in the clematis world. Nearly a score of others that also deserve mention are still largely unknown in the international trade, but one hopes they will soon be in the pipeline.