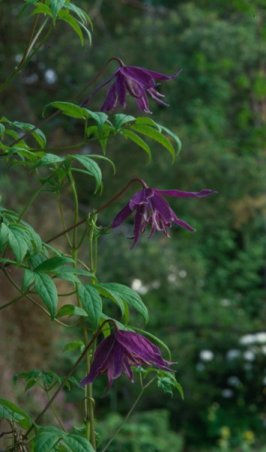 Clematis of the Month for February 1999

Not to cast doubt on a widely-circulated rumour, but if there is a cruelest month for gardeners it may be not April but February, when most deciduous plants look as if they are eons away from even manufacturing a leaf. In Sweden, where the beautiful macropetala shown above was bred, its admirers may have to wait another three months before they see it in bloom; in warmer latitudes the wait will mercifully be shorter. But in either case one of the attractions of 'Jan Lindmark' is that it usually beats the other macropetalas into flower. It is almost, though not quite, as early as Clematis armandii, and hence one of the first signs of Spring.

Like C. macropetala itself and most of its cultivars, it is a climber with a mature height of 8ft - 12ft, though it will often take a lower, bushier stance because the stems tend to intertwine and trail downward when they run out of support. The flowers are double, with an interior feature that sets them apart from most types of clematis -- a central ring of staminodes surrounding (sometimes hiding) their stamens. This interior ring is typical of a whole section of clematis called Atragenes, some of the most interesting of which have only begun to find their way into the trade. Nearly all the Atragene species are native to mountainous areas in Asia and North America, and outstandingly resistant to cold, so they and their progeny are especially suited to northern gardens. In regions where summers are long and severe, they are out of their element and unlikely to prosper. But gardeners in most temperate climates who have not tried them -- alpinas, macropetalas, koreanas, and the rest -- should do so; they are productive and easy to care for. A little shaping-up when they have finished flowering is all they normally require, though a good steward may wish to reach in and take out some of the crossing strands, or pin up stems that are weighing others down. (It is better not to try this very late or very early in the year, for at those times the wood is likely to be surprisingly brittle.) Most of the Atragenes, including this one, have their own way of discouraging deep pruning, for they follow their blossoms with fine ornamental seedheads that change color gradually through the season, and in a protected place can stay on the vine all winter long.

The color of the 'Jan Lindmark' flower seems amusingly hard to pin down, at least on paper. Here are the offerings of seven reputable observers: (1) mauve, (2) pale purple, (3) pinkish purple, (4) violet blue, (5) Pansy Violet, (6) violet purple, (7) purple mauve. Of the several conclusions that might be drawn from this list, the most polite is that the color varies with temperature and light conditions. It may vary also with browsers. So let us call it, tentatively, (8) purplish violet.

Our picture of C. 'Jan Lindmark' was supplied by the real-life Jan Lindmark, a valued member of the clematis world, who has raised and bred and photographed clematis for years. It is a pity that most of our viewers may never get to see the beautiful spreads of clematis he has done for the Swedish gardening magazine Trädgård, supplying both text and pictures.

This particular clematis was a seedling of macropetala 'Bluebird' that he took to his friend (and everyone's clematis mentor) Magnus Johnson for propagation. It was Magnus who gave it its name, and launched it in 1981 into what is now worldwide availability. At last report, the original Jan Lindmark was still capable of grinning indulgently when someone remarks that he could do with a good pruning.

Note, since 'Jan Lindmark' was published, Brewster Rogerson has provided the following additional information.
Taking note of the comment last month that 'Jan Lindmark' is the earliest of the macropetalas to come into bloom, Mr. Johnson has kindly volunteered that two others are even earlier "here in Bränningstrand" -- 'Alborosea' and 'Eximia.' These are not yet widely available, but with more eyes turning constantly to this Swedish horn of plenty, their turn may be coming soon.