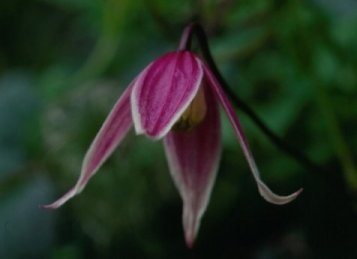 Clematis of the Month for March 1999

Gardeners who know their clematis might well spot this graceful cultivar from a distance and say, "What a beautiful alpina!" but if they did, they would be only half right. Beautiful, yes, and so much like C. alpina in both looks and habit of growth that some garden centers may want to label it that way just for convenience. But in fact C. 'Columella' is not an alpina. Its parents were two other members of the Atragene section, C. koreana var. fragrans (shown below) and C. macropetala 'Rosy O'Grady.'

The species that make up the Atragene section are mostly climber-ramblers native to mountainous regions of Asia and to a lesser extent the North American Rockies. As yet only a few of them are well-known to the gardening trade, though that is a situation ripe for change as more and more interesting named varieties come into the hands of growers. These cultivars are notably cold-hardy, tractable, and appealing for both their foliage and their Spring flowers, and there is such a range of variation in their flower-forms that they tend to bring out the collector in any gardener; it is hard to be content with just one. The most familiar members of this section have long been C. alpina and C. macropetala, though only a few years ago even those went without much notice in a market driven by the large-flowered hybrids. In the United States, for example, growers might list C. macropetala "blue" and C. macropetala "pink" and be done with it. Nowadays, fortunately, it is possible to track down such former rarities as Mr. Fretwell's C. 'Jacqueline du Pre' (an alpina) or the aforementioned macropetala 'Rosy O'Grady', plus a gradually increasing number of others, in most parts of the world where gardeners know enough about them to ask for good things by name. And ask again until they get them.

C. 'Columella' is about to join the parade. It belongs to a large and fascinating stable of Atragene hybrids bred by Magnus Johnson, who at his nursery a stone's throw from the Baltic Sea in Sweden has created a gardening treasure that will take us years to assimilate. Working from both familiar and relatively obscure species, crossing and re-crossing their offspring over a period of more than two decades, he has produced so many good cultivars that in the end his biggest problem was finding names for them all. Witness a whole set named for Roman poets, and this very 'Columella,' named after one Lucius Junius Moderatus Columella (who, as everyone knows, wrote a sizable treatise on agriculture in the 1st century B.C.) Detailed descriptions of these clematis, along with photographs of many of them, are contained in Mr. Johnson's monumental Släktet Klematis, oft-mentioned at this Website. Some of the choicest are still waiting their turn to be "bulked up", as the phrase goes, for gardeners too remote from the Johnson nursery to stop in and get one.

In general these hybrids share the growth habit and garden merit of their parents, and can treated much as we treat our alpinas and macropetalas, shaping them up them after bloom if they need it, or perhaps tying up a limb or two if their natural tendency to ramble needs a little correction. Otherwise they require only the simplest of care. 'Columella' has one special distinction handed down from C. koreana var. fragrans and not always found in its extended family: the flower is deliciously scented.