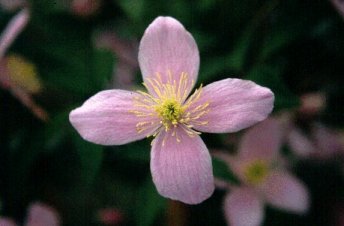 Clematis of the Month for April 1999

[Keen students of clematis will notice that the name above is not given in its usual form. For many years we have been speaking of "C. montana var. rubens" (or more casually "montana rubens"), under the impression that the form in circulation was the clematis introduced in the early 1900s by Ernest "Chinese" Wilson. Now it is known that at some point that authentic var. rubens was lost, and another clematis (or more than one) presumably derived from it took its place, thus becoming the progenitor of many -- perhaps most -- of the named "rubens" cultivars. Technically that is a genealogist's nightmare, into which we would not dream of intruding. But we follow Ruth Gooch (Clematis, The Complete Guide, 1996) in writing 'Rubens' here as a cultivar name -- sufficient warning, we hope, that the subject in the photograph is a current 'rubens' though, alas, not the original one.]

Like most of the montanas, the current 'Rubens' is a strong, rapidly growing climber -- to 10 metres (30 feet) or thereabouts, blooming abundantly in the Spring on wood of the previous year. It also has their one handicap, the limited cold-tolerance that makes them risky for gardeners in severe winter climates. Where it differs from C. montana proper is mainly in coloration: its new stems tend to be reddish rather than light green, the young foliage bronzed, and the flowers pink rather than white. There are other good forms and close relatives of montana, but except for the lovely hybrid long known as C. chrysocoma these two are the only strains that have an established role in the trade.

They have another virtue that endears them to growers. The montanas are among the easiest of all clematis to root from cuttings or grow from seed. Anyone, brown thumb or gray, can propagate a montana. And since in a year's time it will prove to be not only self-pollinating but well attuned to the mating habits of other montanas, it is not surprising that few years pass without a new named montana (most often a rubens cultivar) coming to market somewhere in the clematis world. 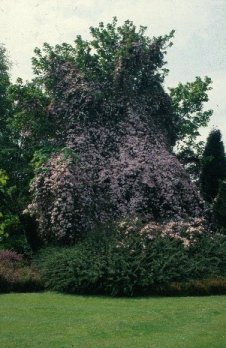 At first glance it might seem that most of these named montanas differ little from one another. All are strong climbers, all suited to the same garden uses, all spectacular in full bloom, and all (or nearly all) wonderfully fragrant. Inspected close up, they all -- except for three or four exotic semidoubles -- have toothy leaves divided in threes, and flowers consisting of four tepals with little or no overlap and a central greeny-yellow eye. So why choose one rather than another? The answer of course is that the leaves and flowers can vary interestingly in their shape, size, texture, and coloration, and hence a brand new combination may always be as near as the next batch of seedlings. What, another one with pink flowers? But that "pink" can vary from the softness of a 'Pink Perfection' to the sharp rose-red of a 'Freda' just as it opens in the Spring. And how about the scent? 'Pink Perfection' has an delectable scent, and 'Freda' not much of one. The leaf-forms too have enough diversity to make one cultivar more suitable than another in some particular garden situation; for example, m. rubens and all its tribe have foliage that can handsomely cover a broad surface and weather to a deep green, but if what is wanted is a bold gesture nothing else in the family has quite the visibility of the big, wide-toothed leaflets of 'Tetrarose.' The variations go on and on.

Sometimes gardeners are deterred from planting a montana because they fear it will swamp them in sheer abundance, and of course it is true that these vines are often valued most for the volume of their coverage, and pruned but sparingly when their bloom is over. But growth can go sidewise or downward as well as upward; montanas are at home on walls, fences, arbors, and even long flights of stairs. And in each case it is truly worth knowing that they are not seriously nor permanently inconvenienced by being cut back whenever they get to be too much of a good thing.