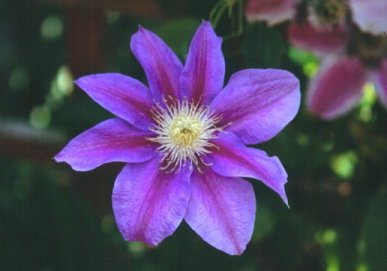 Clematis of the Month for May 1999

In the history of the large-flowered hybrids there can hardly be a more famous name than Jackman. Most gardeners associate it naturally with the purple-flowered 'Jackmani' that regularly outsells all other clematis, and it was indeed the huge success of that one vine in the 1860s that not only brought fame to George Jackman (and Son), but turned their Woking nursery into something like a nerve-center of clematis-breeding in England -- a position it held over many decades. In the Check-List of Large-Flowered Clematis Hybrids that Col. Joel Spingarn published in 1935, it was the name "Jackman" that appeared in the breeder's column more often than any other, accounting for more than eighty cultivars, many of them still extant when Spingarn wrote. Some are with us still, and other good ones have been added since, such as the two 'Barbaras' -- Dibley and Jackman -- which date from the period of recovery after World War II. Ironically, neither of these belongs to the 'Jackmani' race of hybrids, though the latter Barbara, at least, was an accredited Jackman in real life.

From the start, Clematis 'Barbara Jackman' was a "Nelly Moser type" with a difference. The familiar notion of the "Nelly Moser type" is that of a large, usually star-shaped flower with a prominent bar or stripe running down the middle of each tepal; the color most of us associate with this is some shade of pink, with the bar a deeper pink or red. Many variations are possible, and cultivars of this general type abound in the trade today. (We featured a popular one, 'Bees' Jubilee,' in last May's Clematis of the Month.) But the flower of 'Barbara Jackman' was and is decidedly blue, contrasting sweetly with the crimson or petunia-red of the bar. This was not the first barred variety to wear blue or purple, but the flower has a certain elegance that seems to set it apart, and writers have often shown it a special affection. Even today, with new bicolors arriving at intervals from six or seven different points of the compass, it is in no danger of being neglected.

The plant is strong at the base, usually sending up new stems until it becomes relatively bushy, and can put on 3 metres (10 feet) or more, though it can easily be kept lower if need be. As with most of the Spring-flowering hybrids, it adjusts readily to various kinds of supports -- trellises, fences, shrubby host plants either tall or broad -- and does not scorn to live and look comfortable in a tub. In due course it finishes off with ornamental seedheads. As to the flower, it is usually midsized (4"-5"), though occasionally a bit larger. Despite its sharp points it has a rounded look, for the tepals tend to fall back slightly at the tips. Though the number of these may vary (6, 7, or 8), the flower rarely seems to lack symmetry. And the bar has a trick of its own: it keeps its color while the margins fade down from their first blue-purple to lighter and lighter blues.

Like the other hybrids of Group B (or II) 'Barbara Jackman' has a second crop of flowers on new wood in late summer or autumn, but the time to give it a serious cutting back (if needed) is at the close of bloom in the Spring.

The following was included on the Current Clematis page for the following month. P.S. Speaking of matters of language, last month's piece on 'Barbara Jackman' brought one — though only one — lift of an eyebrow from a sharp-eyed observer. "Why Jackmani?" she said, and it was a good question. One "i," not two? For years the accepted spelling has been "Jackmanii"; it has virtually universal acceptance. So wherefore 'Jackmani'? Those who think that this could not matter less may depart in peace, but it does involve a significant point of scholarship. The explanation lay in Magnus Johnson's new Släktet Klematis, where he spells the name with only one "i." Mr. Johnson, whose Latin is beyond cavil, decided it was time to do something about double genitives in the nomenclature of clematis, and stripped out quite a few, including this highly visible one. The question is how this set of changes will be received, in view of (1) the rules of nomenclature and (2) a longstanding precedent to the contrary. Anyone who wishes to discuss the subject, or vote for one of the two candidates, is most welcome to do so.