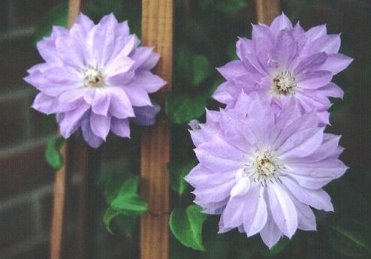 Clematis of the Month for June 1999

C. 'Teshio' represents a large and interesting segment of garden clematis, those with "double" flowers. Bred in Japan by Tasuku Kaneko, it is now in the international trade, and has picked up a devoted following for its reliable show of neat, midsized lavender rosettes in late Spring or early summer. It does not normally have a late second bloom, as do many of the doubles, but in a mature plant the first bloom continues for a long season. (After that, pruning is a simple matter of removing tips that have flowered and shaping up the rest.) 'Teshio' is compact enough to live in little space, and so is well-suited to a small garden or a reasonably deep container.

In previous months we have shown two other doubles, one —'Countess of Lovelace' (June 1997)— fairly similar to 'Teshio' though larger-flowered, and the other —'Sieboldiana' (January 1998)— that would seem at first glance quite unrelated. All three go back through some murky historical pathways to the species known as Clematis florida, long thought to be extinct in its pure form, but now recovered. The flowers of C. florida, ironically, are not double, but it has always been accepted as the original source of doubling in the large-flowered hybrids.

What is of more practical import, perhaps, is that most doubles are highly responsive to their environment — especially to long-term patterns in the weather. Apart from the wide range of shapes and sizes that distinguish one double-flowered clematis from another, many of the named varieties can alter their plumage from one week to the next. A double like 'Mrs. Spencer Castle' can put out a perfect rosette in one set of conditions, a shaggy semidouble in another, and a big irregular single in a third (though not usually all three at once; that charming maneuver is reserved for 'Louise Rowe.') Many are more consistent, but they can all react to change. Not only that, but the tendency toward doubling lies unsuspected in many of our familiar hybrids, and can be suddenly triggered by some unique passage of recent weather. Many a gardener must have seen a 'Henryi' or an 'Ernest Markham' produce an unexpected double blossom, perhaps as its first bloom of the year. (Such mutations must usually be captured and propagated at once if there is any hope of keeping them, for there is no certainty they will appear again.) As for 'Teshio,' it seems to be one of the more tranquil cultivars, consistently producing the same delicately-formed but sturdy flower. No one should be surprised, however, if it ever decides to do something different without mentioning it ahead of time.

For those who would like to pronounce the name (a place-name, by the way) in Japanese, all three syllables get equal time. "Tes-SHEE-oh" would be over-stressing, but it is closer than "TESH-io."