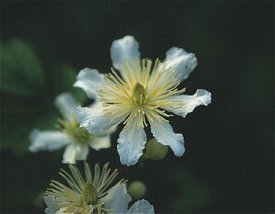 Clematis of the Month for July 1999

Anyone starting out to justify the hybridizing of clematis (if justification were needed) could hardly do better than to choose this spirited performer. 'Paul Farges', now familiar to many under the trade designation SUMMER SNOW, is the product of a cross between two species, C. fargesii and C. vitalba, that have quite different merits but also weak sides that have often limited their appeal to gardeners. What if there were a plant that had the strength and hardiness of C. vitalba without its tendency to become dense and invasive, and the lovely flowering habit of C. fargesii without its sparseness of bloom? Well, there is. Enter 'Paul Farges'.

This is a slender-limbed but wiry deciduous climber, moderate in growth early in the season but imposing by midsummer, when its flowering shoots begin to form. The foliage is of a fresh light green, the leaflets widely separated on long stems, so that even when the vine extends to 6m or 7m (18 to 22 feet) it retains an air of lightness rather than of weight. So despite its potential bulk, it is a good citizen in a garden. The flowerbuds are borne on long individual stems directly from the axils, usually in braces of three but sometimes in pairs, appearing first as little upright pops, and opening into starlike white to creamy-white flowers. In the trios, as with many other clematis, the middle one opens first, leaving the other two in parallel to lengthen out the bloom. Though small — seldom more than 4cm (1.5 inches) across — these flowers with their four to seven widely-spaced tepals and ample center are surprisingly eye-catching. In due time, the creamy centers put on a brief show of their own, for as the tepals fall away, the spiky filaments are left on the stem, forming an almost perfect globe in outline before they begin to wither away. By that time the fragrance that most people detect in these flowers is gone as well. Care is quite simple. The bloom being on the year's new wood (hence, Group C or III), the topgrowth can be cut back sharply at any convenient time between late autumn and early Spring.

It was said above that one of the parents of this cultivar was the species known as C. fargesii. Well, yes and no. The term was used here to make a recognizable link to the name 'Paul Farges', but in books and lists it is now increasingly supplanted by the rather more formidable name accepted by taxonomists, C. potaninii var. fargesii. That is not the only change of name that has befallen this plant since it was bred in 1962, and the details may interest viewers who like to look into the history of favorite plants.

'Paul Farges' was one of over a hundred clematis hybrids produced in the 1960s and 1970s by A.N. Volosenko-Valenis & Margarita A. Beskaravainaya at the Nikitsky State Botanical Garden, in what is now the Ukraine. The name they gave it was C. x fargesioides, which of course means "like fargesii", and it was so registered in the Soviet Union, with the designation hort., in 1979. That is the name under which it has often appeared in books and nursery lists in the West. But there were bars to the acceptance of fargesioides as a legitimate name, and it is being gradually supplanted by the scholarly compromise 'Paul Farges', which preserves the original reference to the French missionary and explorer who bore that name, and is formally admissible. It is so recorded in the Clematis Register and Checklist (2002). 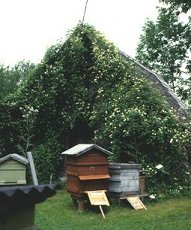 As for its other name, SUMMER SNOW, this reveals a nicety in the Code of Nomenclature that may not have come home to most gardeners. Let us ask our Clematis Registrar, Victoria Matthews, who has already helped by straightening out some of preceding details, to go on with the story: "The position was further complicated in about 1994 when Raymond Evison suggested the name 'Summer Snow' on the understandable grounds that it was more commercial, and this name was taken up by a Danish company which sold many thousands of plants each year under this name, which began to appear in catalogues. However, according to the ICNCP rules and definitions, Summer Snow must be considered to be a trade designation and cannot be used as a cultivar name (Principle 8) although it should be cited with the accepted cultivar name (Article 11.1) and written in capitals (Recommendation 31A). Thus, the full citation of this cultivar is Clematis 'Paul Farges' SUMMER SNOW or Clematis SUMMER SNOW 'Paul Farges' ". (Quoted from "Cultivars Registered in 1997", Clematis International 1998, pp. 74-75.)

Viewers may be pleased to learn that the objects in the foreground of the lower picture are beehives. The photograph was taken by Ken Woolfenden in Latvia, at the farm of Janis Bikse, known to insatiable searchers for clematis as the breeder of C. 'Daira' and C. 'Trimda.'