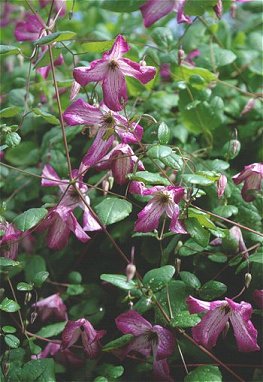 Clematis of the Month for August 1999

In recent years no segment of the genus Clematis has brought more of a sense of discovery to avid gardeners than the small-flowered tribe known as "viticellas". A number of these have been in the trade for years, offered with full knowledge that the small-flowered kinds as a group would have some catching up to do before they could rival the popularity of the large-flowered hybrids. Whether that day has yet been reached is doubtful, but nowadays — for good reason — these clematis are in great demand on their own, with breeders and importers bringing new ones to market as fast as they can. One of the most familiar of the traditional stars is 'Minuet'. Though its exact parentage is not known, it has some famous names in its history. It is apparently one of the seedlings that came into the hands of William Robinson at Gravetye Manor in 1914 from the French breeder Francisque Morel, and hence into the hands of Ernest Markham, who named it and turned it over to the Jackman firm for propagation.

Like C. viticella and most of its small-flowered descendants, 'Minuet' blooms abundantly on its new wood. The flowers are borne in terminal sets of three and farther down the stalk in pairs, on slender stems that jut out from the axils in nearly opposite directions. If this fine symmetry does not usually get noticed, it is simply because in a full bloom there are so many flowers. What is sure to be noticed is their buoyancy. Like those of the species, they tend to sway and bounce gently in a breeze; it is not hard to see why Markham thought of dancing when he chose the name. The blossoms themselves, though small, are eye-catching, and stand up well to close inspection. The four or occasionally five sepals, blunt-tipped and seldom inclined to lie flat, offer no fewer than three colours, not even counting the subdued pink on the reverse side. The interior of the sepal is white and the small central tuft of stamens a light green, but what adds life to the blossom is the vividly contrasting dark color of the margins and veins. These are normally purple, though the shade will vary. In response to the seasonal weather (or perhaps the eye of the beholder) they may be violet or even a near-red. In any case they are almost always deeper than those of another two-toned viticella cultivar often paired with it in gardeners' minds, 'Little Nell.' 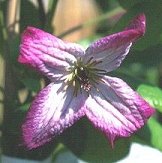 The plant is, again like most of the other well-known viticella cultivars, easy to use in a variety of ways. A vigorous climber to twelve feet (3.7 metres) or more, it adapts readily to fences, trellises, and tall hosts, or is quite willing to trail freely down a bank or wall, or can even be grown as a groundcover. Indeed, the only limit to its versatility is that it is unlikely to do well for very long in any container of less than colossal size. Gardeners looking on as its stems shoot up into a tree or spread out in a tall shrub need not fear it will be hard to disentangle later on; in late autumn or winter the strands can be grasped at shoulder height or thereabouts and pulled down, usually in one piece, with a single steady tug — not, be it said, a jerk! Then or later, the pruning can be finished as is customary with new-wood (Group C or 3) plants, cutting back all the stems to pairs of strong buds near the ground.

Viewers interested in the viticella strain may wish to consult Dr. John Howells' book Trouble-Free Clematis: The Viticellas (Garden Art Press, 1998), which cuts a wide swath, including larger-flowered cultivars and various hybrids related to other species, and has pictures of many.