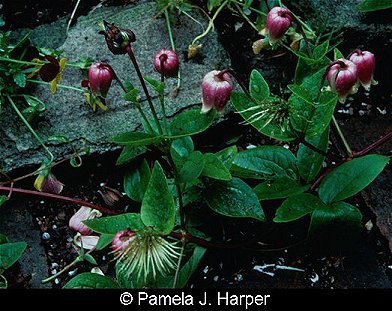 Clematis of the Month for September 1999

Though this clematis may be less familiar to gardeners than some of its near relatives like C. texensis and crispa and pitcheri, it is in a sense the captain of that team, for they all belong to the section of the genus known to botanists as Viorna, or less formally "the Viornae". This is a sizable section, about evenly divided between climbers and smaller erect plants, most of them (though not all) native to the American South or Midwest. All are easily recognizable by a feature that has earned them a second name — "Leather Flowers", for the tough texture of the interesting ornamental bells they bear on their new wood.

C. viorna itself is one of the climbers. Like many another climbing plant, in its natural habitat it often has to hunt for support, and so has accommodated itself to running along the ground until it finds something tall it can cling to. Our photograph (taken by Pamela J. Harper, whom we thank for permission to use it) shows a plant that had this problem until its Seattle landlord found a way to deal with it. When he acquired C. viorna all he knew was that it is a climber; so he decided to put it at the base of a peony and let it climb on that. It did not take him long to discover that this plan was less than ideal, for the vine went up the peony and down again, giving no sign that it was ready to stop. C. viorna can reach about 12' (4 metres) if it is happy. So what the gardener did was to train it out to the edge of a walkway, where it obligingly let out this terminal spray. There is more to the vine, of course, than is seen in the picture, and dealing with the rest of it required periodic attention. So on the whole it is better to choose a taller support — preferably a reasonably dense shrub or perhaps a rose — for like the other climbing Viornae, this is a thin vine, given to irregular branching, and not at its best in a naked exposure. (The only one of the climbing Leather Flowers that ordinarily produces foliage with enough density to screen a surface behind it is C. pitcheri.)

A word about color. There are several photographs of C. viorna mounted on the Internet (not to mention those in books), and they vary widely enough-especially in color—to be confusing. The usual cause is the over-emphasis on reds that seems so hard to avoid in photo-reproduction on the Web. But C. viorna itself is also quite variable, the color of its bells ranging from reddish brown to something not far from a dusky lavender. Not only that, but it is an easy mark for cross-fertilization with its relatives, and some plants pictured (or indeed sold) as C. viorna may in fact be hybrids. Since the species is not widely found in commerce, most plants of it available to gardeners are raised from seed. Plantlovers wishing to come as close to the genuine article as they can would be well advised to shop with care and ask questions. On the other hand, it is very hard to form a dislike for any Leather Flower one brings home, no matter how vague its pedigree.

C. viorna in the wild, where it tends to grow along the edges of woodlands or on the banks of streams, is often woody at base. In gardens it is likely to be or appear herbaceous. If any stems are left standing after the winter, they can be cut to the ground, for all the flowering will come on the new wood.