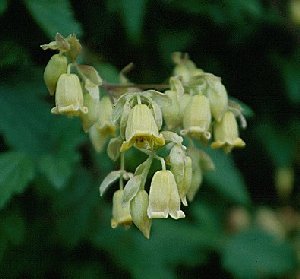 Clematis of the Month for October 1999

With the days shortening and many of the main-season clematis beginning to need their beauty sleep, there is still time in most temperate gardens for some of our most cherished performers to put on their big bloom for the year. One of these late-flowering species (featured last November) is C. terniflora, the "Sweet Autumn Clematis". Another, no less bountiful though quite different in effect, is the handsome Chinese species sometimes known as the "Nodding Virgin's Bower", pictured above.

Given a warm summer C. rehderiana can start into bloom as early as August, but ordinarily its pattern of growth is slow, with the foliage dawdling at first, but filling out well at the base before it starts to grow tall. In autumn, if it has not been reined in by a gardener with no room to spare, it can reach from 15' to as much as 25' (4.5 to 7.5 metres), and break out into many hundreds of graceful bells suspended in small clusters. The color can vary, but is usually a pale cream to creamy yellow, with the upturned tips revealing an occasional glimpse of darker anthers. Writers almost unanimously describe this color as "primrose" yellow, and if they chance not to mention that, they will probably make up for it by noting that the scent reminds them of cowslips. (No other relationship is usually suggested between Clematis and Primula.)

The foliage of C. rehderiana is appealing in itself, its leaflets having a slightly craggy look, a downy texture, and the ability to hold their healthy green color for a long season. This foliage is also worth watching in dry weather, for the species is highly dependent on moisture below ground, especially when it is young and just getting started. It is fibrous-rooted, and the delicate strands of the root system cannot long do without what nearly all clematis need for sustained growth below ground: good drainage and a ready supply of fresh, oxygen-bearing water. Let a young plant of C. rehderiana run dry on a hot day, and the foliage starts curling up and parching. Fortunately, the species is so vigorous that with a return to good watering it can quickly overgrow the damaged leaves with new ones, but no one who has ever witnessed such a scene of woe cares to have it repeated. As the plant ages and digs deeper, the danger from a temporary dry spell naturally lessens, and indeed most gardeners who grow C. rehderiana may never have encountered it at all.

Gardeners for whom frost comes early and stays late are unable to enjoy this splendid vine in flower unless they have some means of giving it special protection. But in milder areas it is of easy cultivation. It needs firm support, being strong and bushy, but tends to grow mainly upright rather than to branch out widely in the fashion of the C. montanas; so in the absence of a tree or sturdy tall shrub to climb on, it is likely to be better suited to a trellis than a fence in most garden situations. As to pruning, it can be treated simply as a Group III (or C) clematis and hard-pruned at the beginning or end of winter, or cut back to whatever height is desired for the starting-point of new growth in the Spring.