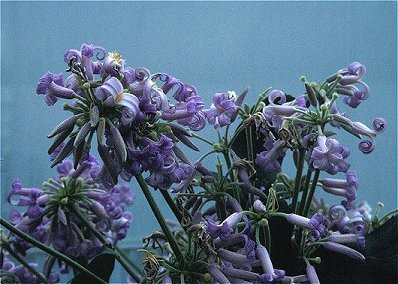 Clematis of the Month for December 1999

C. heracleifolia is one of those clematis that are often described as "herbaceous erect," meaning that it does not cling or climb, and that it dies back to the ground each year when its season is past and the weather turns cold. Curiously, although there is hardly a book on perennials that does not include it as a hardy, attractive, and virtually trouble-free border plant, in most countries it is difficult to find except in specialty nurseries, perhaps because when gardeners come shopping for a clematis in garden centers, nine out of ten (if not forty-nine out of fifty) are looking for a climber. For many of them who see C. heracleifolia in bloom for the first time, or even merely in leaf, the predictable reaction is, "That is a CLEMATIS?"

Well, it is unusual. (And, by the way, it is not quite herbaceous: in any but very cold climates it will normally build into a clump with a woody base.) For much of the season it is the foliage that counts, for the flowers are relatively late. The stalks are stiff enough to hold themselves erect to a height of about three feet (1 m.), showing off the big, sturdy leaves with their interesting structure: each one with three well-separated parts, the middle leaflet much the largest, and all three irregularly toothed and slightly hairy. It is the foliage that got the plant its name: -folia for the leaves, and Heraclei- for their resemblance to Heracleum, otherwise known as the cow-parsnip.

The blossoms arrive in late summer or early autumn, at and near the tops of the stalks, fanning out in clusters of what seem to be small tubes, and then opening into hyacinth shape, with sepals ranging in different specimens from pale to deep blue, and a small bright-yellow center. They have good staying power and a pleasing scent, and if caught at the right moment can serve surprisingly well as cut flowers.

Since it bears both male and female blossoms on the same plant (as most clematis do), C. heracleifolia is self-fertile, but it readily accepts the advances of related species. As a consequence there is a tangle of hybrids and select forms that can defeat the best efforts of garden writers to keep them all straight. It is easier to recommend 'Davidiana' or 'Wyevale' over the species than it is to reach agreement on their exact relation to it, and it isn't always possible to believe the labels that say 'Campanile' or 'Cote d'Azur.' So there is some confusion in the marketplace. Gardeners who are dead-set on getting the right plant should either confine themselves to a source they know they can trust, or wait until they can see the plant in flower. Gardeners who feel no need to be that particular can go ahead and take any C. heracleifolia they can find, secure in the knowledge that it is going to be interesting.

One further note: the easiest way to propagate one or perhaps two plants from a reasonably mature C. heracleifolia is to divide it by making a cut through the entire root-mass in very early Spring, when the ground is workable but the plant is not yet in active growth.