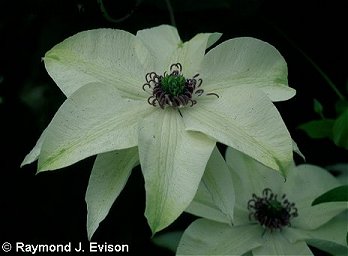 Clematis of the Month for January 2000

For a New Year, a brand new cultivar — so new, in fact, that it was only recently launched from its home nursery in Guernsey. Its cultivar-name is 'Evirida,' but a glance is enough to show that the trade designation, PISTACHIO, will be what everyone calls it.

There are enough species and hybrids with green in their flowers to furnish lovers of clematis with a perpetually interesting topic of conversation. A few, like the lime-coloured descendants of the New Zealand C. petriei have green as their principal colour; many more, especially among the Oriental species, begin with a greenish-white or greenish-yellow cast to their flowers, mostly bells, and lose the green as the blossoms mature; so do the beautiful "near-yellow" hybrids that stem ultimately from Clematis patens, though some of those have also a longer-lasting pattern of delicate green veins. A few familiar cultivars like 'Duchess of Edinburgh' and 'Alba Luxurians' wear green as a minor variegation, in random streaks or edging on some of their flowers. The variations are many, and gardeners naturally have their preferences. Then there is that temporary green that is no one's preference, which may appear when Spring is very late, the ground has most of its nutrients still locked up, and the first blossoms of a favorite hybrid like 'Barbara Dibley' or 'Lady Londesborough' open with bright green midribs on their underside and a topside colour that evades description. Fortunately that condition is rapidly cleared up by milder weather. 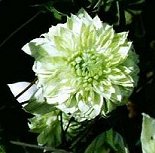 What Clematis PISTACHIO adds to this array of greens is first and foremost its striking green eye, part of its heritage from one of the most enigmatic members of the genus, Clematis florida. C. florida itself does not have an unusually imposing center, but the best-known of its offshoots in commerce are famous for theirs, the so-called 'Bicolour' and C. florida 'Plena,' illustrated here. When Raymond Evison saw that auspicious tuft of green in a new seedling of his C. florida, he knew at once that he had a significant sport in hand, and as a result the future PISTACHIO had the benefit of long and careful study. One finding that should interest many gardeners is that the plant when young is capable of a good bloom indoors, and adapts well to container-planting. The description that follows is quoted from press materials on PISTACHIO supplied from Guernsey. 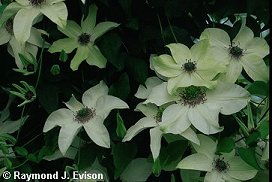 "It has a deciduous habit, the leaves are trifoliate, the leaflets lanceolate, which are sometimes further divided or lobed and of a good deep green. Each flower stem has a pair of bracts below the flower. The flowers are produced from early summer to early autumn as a garden plant and to late autumn or early winter under glass. Generally. there are six broad overlapping tepals being creamy white in summer to creamy green in the spring or autumn. The centre of the flower is made up of short stamens with pinkish-grey anthers. There are no styles, these being replaced by a green tuft of aborted stigmas which remain after the tepals have fallen away. It flowers on the current season's stems and belongs to pruning group 3. It will continue to flower well into the autumn as a garden plant unless there are early frosts. It can be used as a cut flower by cutting long strands of flowers or by using individual flowers. It is best grown through other wall trained evergreen shrubs where it will attain 2-3m (6½ - 10ft) or in a container where it can be trained onto a climbing support of less than 2m (6½ ft) in height."

"As a flowering pot plant especially grown for use in the home or conservatory, its flowers will be smaller and its habit more compact. Once planted in the garden, it will grow away as described above."

A word about the way this plant's name appears in the caption at the top, for those who find it unusually elaborate. It represents a pattern we are likely to see more and more hereafter, as growers wishing to assert proprietary rights to their creations and collect royalties for them apply for plant-breeders' rights. A feature of the relatively new arrangement is that each protected variety must have a "trade designation". Since this may at times be distinct from and in addition to the plant's cultivar-name, and an anxious world must have some way to tell them apart, a new rule is now coming into play: cultivar names appear as heretofore in single-quotes, and trade-designations in SMALL CAPITALS. (A natural consequence of this may be that writers of gardening books and nursery lists, whose love for taxonomists is legendary, will soon need more of the cup that cheers than ever before.)

Webperson note:- Given the limitations of HTML, the syntax that Brewster describes may not be correctly reproduced in the text above. Return to top of page