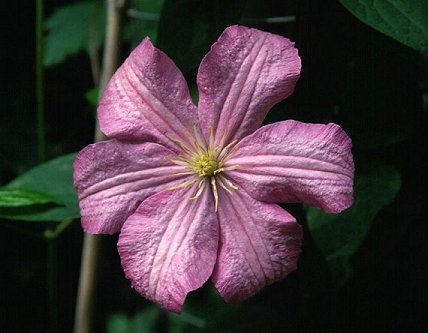 Clematis of the Month for February 2000

From the scarce but promising newcomer C. PISTACHIO we showed in January 2000, we turn this month (February 2000 - Ed.)to one of the best-known and most accessible of all the large-flowered hybrids. For almost a century 'Comtesse de Bouchaud' has been a staple of the clematis trade, and never more so than at present. Though there are other excellent summer-flowering pinks, most purveyors of clematis know from experience that it would not do to be caught without this one. Many thousands of them pour out into gardens every year, and it is such a capable variety that it can ordinarily give a beginner (whose expectations, as we all know, may be unrealistically high) something to cheer about in its first year in the ground. 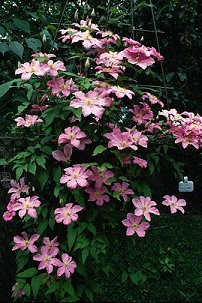 The flowers, usually with six slightly overlapping tepals, have a distinctive bumpy texture and deep midribs, and the tendency of their tips to curl under gives them the somewhat rounded look. As with many other clematis the blossoms typically come in threes, with the middle one opening first and the lower two following. And as with most clematis pinks this one is touched with lavender, though only slightly and at the start; at a good viewing distance the Countess is unmistakably pink, a shade strong enough to play off well against a huge variety of foliage plants that might be chosen as hosts. Ordinarily the plant will top out at 7' to 9' (2m -3m), bearing its flowers primarily in the upper half. As a consequence, unlike a good many of the Jackmanii breed to which it belongs, it is suited to growth in a (big) container. It is truly an adaptable plant, and to cap it all, it blooms for a relatively long season. Since the flowers are all on the new wood, it can be hard-pruned (Group C or III) at any time after bloom for the year is finished.

Of the historical Comtesse de Bouchaud we seem to know little except that this plant was named for her by its breeder Francisque Morel, in the very first years of the last century. But we feel confident she would smile on us for insisting, despite an apparently endless wave of printed memorials to the contrary, that she was not a Comptesse (whatever that may be) but a Comtesse, and her name was Bouchaud (Boo-show), not Bouchard (Boo-sharr).