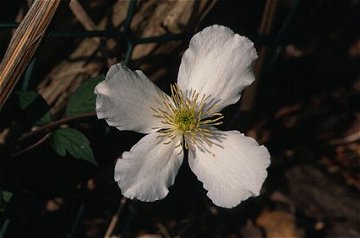 Clematis of the Month for April 2000

Clematis are not known to have identity crises, but our featured clematis this month may be entitled to one. It is a popular plant, one of the most widely grown of the "white" montanas, and fairly easy to identify because of the individuality of the flower, with its broad, blunt tips and graceful wavy edges. The name it usually goes by is C. spooneri, not because that is its official name, or even its original one, but because it is much easier on the brain than trying to stay abreast of the other names it has had (and keeps getting) since its introduction from China in 1908. All its names, however, are still in public use on labels and in advertisements. This one taxon can be found, depending on the age of the labels and the scholarship of the nursery, as C. chrysocoma var. sericea, C. chrysocoma, C. spooneri, and C. montana var. sericea, and the latest rumours even suggest that much nursery stock of it - in England, at least - may in fact be a form of C. montana var. grandiflora. Add to this that the plant as sold in the U.S. is plainly not identical to the English version, and one can only be glad that our clematis of the month has never learned to read.

The illustration shows the English form. The flower is exactly the same in the American version; it is the foliage that is different. One look at the photograph, and oldtime clematis fanciers will say quot;C. chrysocoma", because the deeply ribbed, dark green leaf is a major attraction of that beautiful plant in the climbing form most of us know. It is overspread with light down, both leaf and stem, and can gleam under a bright sun. (It was this downiness that persuaded two early students of the plant to range it under C. chrysocoma, an identification that stuck for many years, though it is now complicated by uncertainty.) The plant circulating in the U.S. is without this attractive feature, the foliage being good, typical montana foliage but smooth-surfaced. It is in all likelihood a seedling of the English version that was propagated at some point to fill a commercial need and gradually supplanted its parent, possibly without anyone's taking note of the difference at the time.

Both forms have the standard gardening virtues of the tribe. Their fast growth, strong foliage, and prodigality in Spring flowers make them well-suited to covering big expanses, horizontal as well as vertical, and they are surprisingly easy to control if they get a late-Spring inspection every few years to remove any thatching that may have developed. The long strands grow freely both before and after flowering, and can be substantially shortened after the Spring bloom if need be to hold the plant within a needed compass. But it is worth noting with C. spooneri that unlike most montanas it will sometimes mount a second bloom, climate permitting, so gardeners with plenty of room overhead may want to juggle their Spring trimming with that possibility.

One word more about names. The C. montana var. sericea in our heading is the currently accepted name, a return to the original name conferred on the plant by A. Franchet in 1907-08. The sericea means "having long, straight, shiny hairs". (Take that, American version!)