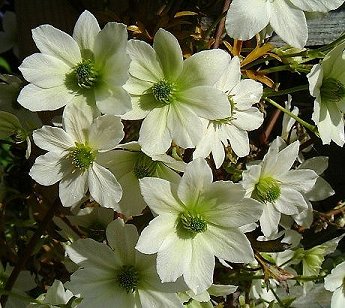 Clematis of the Month for May 2000

The star of my garden this month is 'Early Sensation'. It is growing on a 6 foot (2 metres) by 2 foot trellis and is covering it from top to bottom with several hundred flowers, each up to 4cm across. The flowers start as hanging buds and as they open they turn their faces vertical to face you. It is a fantastic display that is delightful. I write this with some surprise, I had been disappointed with it over the last two years and had planned to remove the plant this year. Now, of course, I would not dare to do so in case it flowers like this again! 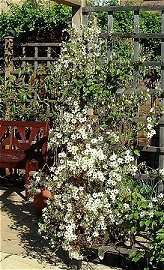 This little known cultivar has a similar sized and shaped flower to C. cartmanii 'Joe' which we have featured in a 'Previous Clematis of the Month'. 'Early Sensation' has wider, rounded tepals than 'Joe', with crenellated edges and nice indented veins which run the length of the tepal. When the flowers first open they are green in the centre - not just the central stamens but also the base of the tepals. As the flowers mature they whiten but the stamens stay green and tightly compacted unlike 'Joe', which has yellow anthers that radiate like a star.

'Early Sensation' is not very well known, at least not in UK. It was bred by Graham Hutchins of Essex, UK. According to Robin Savill it is a cross between C. paniculata and a paniculata hybrid while 'Joe' is a cross between paniculata and marmoraria. This explains the similarity between the two. 'Joe' is also in full flower but as I grow mine in a pot, it's roots are restricted and only gives a foot or so of growth. C. paniculata and marmoraria are both natives of New Zealand. Interestingly, I see that 'Joe' is referred to in reference books as male and 'Early Sensation' as female, perhaps this accounts for the difference noticed above in the flowers. 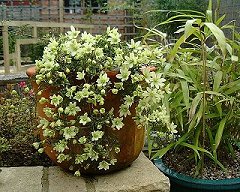 The New Zealand hybrids in my garden are filling the gap that comes after the armandii, alpinas and macropetelas have flowered and before the montanas flower come into their stride. Another in full flower is C.'Pixie' which has the advantage of being highly scented even when in a pot on my rather wet patio but the disadvantage of small greenish flowers, half the size of 'Joe' or 'Early Sensation'. 'Pixie' is a small plant, about 2 feet in height, as its name indicates. It is a petriei and marmoraria cross and another male plant. The final plant I have yet to see flower is 'Lunar Lass' a marata and paniculata cross. Both 'Pixie' and 'Lunar Lass' were also raised by Graham Hutchins.

A final New Zealand hybrid I'll mention is 'Avalanche'. The flowers of this are white and twice the size of those of 'Early Sensation' or cartmanii 'Joe'. The plant may also be a little taller, reaching 13 feet or 4 meters. This is the one I would go for if I had no others in this group.

Generally the hybrids of New Zealand descent prefer well-drained soil and are at home in zones 7 - 9. They are evergreens with finely cut curling leaves which feel almost as tough as leather. In the UK we can grow them outside, perhaps in pots on the patio, and they are often referred to a conservatory plants. Members of the Society will be able to read an interesting article in this year's Journal where one of our members discusses his success in growing the New Zealand species and cultivars in the UK. I look forwards to reading it and enjoying the lovely 'New Zealand' group of flowers again after they have finished flowering in my garden.