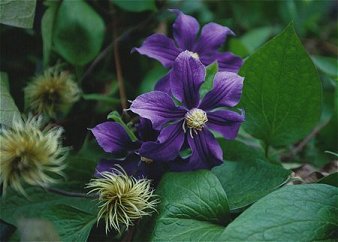 Clematis of the Month for June 2000

Gardeners who have ready access to this excellent plant may be surprised to learn that it is not always easy to find. At first glance that is strange indeed, for C. 'Durandii' is an old-timer and one of the most entertaining of clematis, regarded with affection by gardeners who grow it, and almost unfailingly recommended in the literature. It is very hardy and easy to grow, strikingly individual in both foliage and flower, longer-blooming than most clematis, and no trouble at all to prune, since it dies back accommodatingly when its season is over. So what more could one ask, and why is this paragon not in every garden shop?

Christopher Lloyd, describing the several blue-flowered clematis, saved 'Durandii' for last because, in his words, it was "the odd man out". Unlike the others — unlike most of the hybrids familiar in the trade — it is not a vine. Its leafstalks do not cling, and hence the plant doesn't climb. That is not really a disadvantage, but it might as well be, since it results in some growers' (and many nurseries') bypassing the plant on the premise that the demand for it may not be heavy enough to make it worth their time and floorspace. This is of course an old story in the trade, affecting the accessibility of countless plants and not just the clematis we can't seem to find. Only the pressure of constant requests can prevail against it. C. 'Durandii' has fortunately kept a toehold on the marketplace for years, and is no danger of losing it, but it still needs some help to climb into the always-available class. 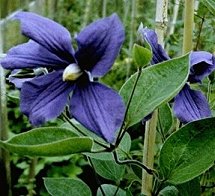 Far from being a handicap, the non-clinging habit of the plant offers some interesting options to a gardener. The young stems hold themselves erect up to about four feet (1.2m) but then begin to need support. If unsupported they will start bending (as in the picture to your left, ©B.Rogerson) in unpredictable directions, each stem — in fact, each node — seemingly a law unto itself. If the intent is to keep them heading upward in a fairly narrow span they must be tied in place or tucked firmly into a host plant. If they are left swaying in mid-air, the increasing weight of the stems will soon have them on or near the ground, where they will nestle into any bed or low-lying host they happen to find. They may grow to seven or even nine feet (2.5m to 2.75m) depending on circumstances. By early summer the show has usually begun, and with mature plants it will last well into autumn, often with little surprises along the way. For even when the stems are carefully pinned upright, the plant is so vigorous and self-willed that a stem or two is likely to escape and lie unnoticed until the time comes to flower, at which point the buds will head straight up and the uniquely recognizable blue blossom will follow.

Longtime observers of C. 'Durandii' would probably describe the vivid indigo flower as having four tepals, widely spaced and flaring out with a twist when fully expanded. But sometimes they find six tepals on most of the flowers, and sometimes five, and it is not clear what conditions bring on these variations between one bloom and the next. The color too can vary; now and then a new flush of bloom can be noticeably lighter than usual, so a gardener who guides this plant up into a yellow rose expecting to have yellow-and-indigo may end up occasionally with yellow-and-skyblue. (What a ghastly fate!) The clean, sturdy foliage however is more predictable: lightly-downed stems supporting simple opposite leaves that stand up well to the weather, holding their medium green through a long season.

As for its history, the plant was introduced by Durand Fréres in 1870, and is said (though this has been disputed) to have resulted from a cross between C. integrifolia and C. × jackmanii. The C. integrifolia element is undoubted, and can be traced in the leaf-and-stem arrangement and the bell-like initial character of the flower. Whether it was C. × jackmanii or C. lanuginosa or C. viticella that provided the increased size and certain other features — all three have had their champions — we must leave to the learned. After a fresh examination of the record, Magnus Johnson concluded in his The Genus Clematis (tr. 2001) that the challenges to the Durands' own report of the cross grew out of a single mistaken identification. Hence the original report survives as the only one with any authority. It reads: C. integrifolia × C. lanuginosa. The plant, however, we take to ourselves.

By the way, it is no longer truly an odd man out. Other clematis with an integrifolia heritage and genes incorporated from elsewhere have been coming on in recent years. Lucky gardeners can lay hands on such interesting cultivars as the Ukrainian 'Alionushka' and 'Sisaja Ptitza,' the luxuriant 'Roguchi' from our Mr. Ozawa, and Raymond Evison's 'Petit Faucon,' all of them vigorous non-climbers that bear handsome midsized bells over a long period on their new wood. They are not quite on the scale of C. 'Durandii,' and so may not compete with it for drama, but they are valuable in their kind, and they point the way to a new generation of hybridizing. More of them are sure to follow.