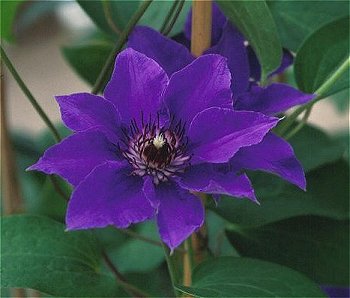 Clematis of the Month for July 2000

As this instalment of our monthly series goes up on the Website, the center of attention for many of us is the German city of Dresden, where members have just convened for the long-anticipated Year 2000 General Meeting and the events and excursions laid out around it. In tribute to the German wing of the Society, which made the arrangement for this occasion and acted as its hosts, we take pleasure in featuring a noteworthy German-bred clematis, still relatively new to many but coming on strong, the 'Königskind' of Friedrich Manfred Westphal. 'Königskind' might be regarded as his signature plant, inasmuch as he chose it (and its alter ego, as will appear) for the cover-picture on his 1996 Clematis Farbkatalog I.

It is a Spring-blooming cultivar with a long season of medium-sized flowers, royal blue touched at first with the usual tinge of purple. Now there are scores of hybrids that come close to matching that description — not so many that they could be dismissed as "a dime a dozen," in the American phrase, but enough to make it necessary for a newcomer to have some special claim to distinction. 'Königskind' has two. First, it is notably compact and hence suitable for containers or gardens without much room overhead, for it rarely climbs to more than 5' or 6' (1.5-2m), but will normally build up well at the base. And second, the flower has a change of countenance midway through its bloom. Ordinarily when the anthers in the center of a clematis blossom shed their pollen they start to fray and fade into insignificance. In 'Königskind' they begin dark but turn even darker as they grow lax, ringing the eye of the blossom like eyelashes, and making it more prominent. The blue has faded somewhat by that time, so that the flowers on their way out contrast interestingly with those just breaking into bloom. It is an effect one learns to watch for, and not very many clematis have it in their bag of tricks. The plant is easy to grow, and requires only the normal treatment for Group 2, a modest cutting-back when its first crop of flowers has gone by. A later bloom on the new wood can be expected. 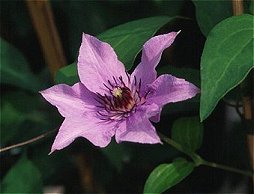 Some years after he had begun producing 'Königskind' in quantity, Mr. Westphal had the good fortune to spot a pink mutant amidst all the blue, and immediately went about saving it and putting it under cultivation. So today there are two Königskinder, not just one. The pink sport bears the name 'Rosa Königskind' or sometimes 'Königskind Rosa,' providing those of us who lack an iron grasp of German idiom with an absorbing (if irrelevant) question: are we talking here about the "Pink Child of a King", or the "Child of a Pink King"? We will probably not find that particular question answered in the forthcoming Clematis Register, but the Register will be obliged to rule on the name itself, accepting one form of it and relegating the other to the rank of "synonym." The blue cultivar presents no such problem.

Formerly available mostly in the European market, both 'Königskind' and its pink offshoot (which is stable) have moved into the international trade, though not yet in big numbers everywhere. Clematis-lovers who want them can do themselves a favor by asking for them, politely but with increasing firmness, at their favorite garden centers.