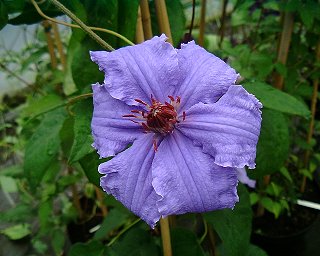 Clematis of the Month for August 2000

For those of us who sometimes find the history of clematis nearly as fascinating as the plants themselves, this big-boned hybrid with its few but magnificent flowers will be no stranger. It used to be described, and often illustrated, in most books on clematis for gardeners. For the gardeners themselves, it has all too often been an item that lingers on their list of desiderata year after year, because it was always rather scarce and getting scarcer.* The books now often leave it out. But for any searcher who finds it offered for sale, or catches a first sight of the flower fully extended, it is an experience that begs to be shared with anyone who will listen.

'Prins Hendrik' was raised at Boskoop in Holland sometime during the first decade of the last century, just before the great age of ornamental plant-breeding went into nearly total eclipse at the onset of the first World War. The plant was named in honour of the consort of then Queen Wilhelmina. He was a duke in his own right, and could hardly have failed to appreciate that, of all the plants that might have been named after him, this one had a truly aristocratic posture. Normally about 9' - 10' tall (2.75m - 3m), it tends to branch out loosely, clothing the space with large light-green leaves on long stems, but leaving room for flowers often in slightly recessed positions, where they will begin to bud in midsummer. At first rounded-looking, like the young flower in the picture, and often partially hidden, they gradually open out into a star shape, with a slight ripple in the margins, and when fully open may extend to 7"-8" (18-20cm), occasionally even more. Nowadays we have a number of clematis with flowers that can claim to be that expansive, but in its heyday 'Prins Hendrik' had only 'W.E. Gladstone' for a rival, at least among varieties that were widely known. It seldom bears many flowers at a time, but every one is a performance in itself, and the plant has a long season. When the show is over, Group III (C) pruning suits it best.

We would have liked to offer a picture of the fully-open flower. The photograph above was taken during last month's visit to Dresden, but in the flurry of bus-rides and picture-taking no opportunity arrived to get another. So our viewers are entreated to straighten out those six tepals into a big rough-edged star in their minds' eye (and, if they like, float it in a virtual bowl, for this is a blossom with a great reputation as a cut flower). They may like to know as well that when the flower is observed in semi-shade, the anthers that are such a distinctive red here look considerably darker, at times seeming almost black—a memorable contrast. The flower is at its spectacular best out of direct sun.

* A personal note: having lost my 11-year-old 'Prins Hendrik,' I went to Dresden for the I.Cl.S. meetings intent on finding another if possible, and was delighted when I got to the Conference headquarters and unexpectedly found a mature specimen of it amidst the plants brought in to greet us in the entrance hall. It had been supplied by Herr Lothar Sachs, whose nursery we would visit later. On being asked if he had another 'Prins Hendrik' available he said yes, but it was seven feet tall, and hence rather less than ideal for travel across the ocean as hand-luggage. Later it proved he had a very young plant—a grafted one—at the nursery, and he very kindly gave it to me. It was more than generous. The fact is, 'Prins Hendrik' has been gradually disappearing because it is brutally hard to propagate, and for years growers have been giving up on it one after another. That this little plant was produced by grafting is a sign of the difficulty. Apart from a few exceptional nurserymen, such as Manfred Westphal whose C. 'Königskind' we featured last month, clematis growers seldom use grafting except on varieties that are all but impossible to grow in any quantity from cuttings. (So a vote of thanks to Herr Sachs, and may he produce many more.)