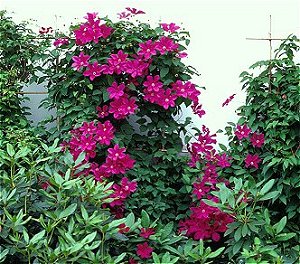 Clematis of the Month for September 2000

Gardeners who like to play the game "Which is the best"? would not go far without finding an argument if the topic were red-flowered clematis. The reds are a varied tribe, and evaluations of them tend to be varied as well. Plant-lovers for whom species are all-important may have only a few red-flowered clematis to nominate, but one of them, C. texensis is perpetually high on the gardening wish-list, not only for its attractiveness and its scarcity, but for its prestige as a parent of interesting offspring. As more and more gardeners work their way into the small-flowered viticellas, votes are heard for such cultivars as 'Mme. Julia Corrévon' or 'Kermesina' as the Best Red. Traditionally, though, the question has hovered over the large-flowered hybrids. 'Ernest Markham' has had its partisans, and year after year it is ubiquitous in the trade. 'Rouge Cardinal' is another variety with plenty of support. Recently it seems as if the gardening press may have crowned 'Niobe' as Best of the Reds. But we can be sure that with some three dozen red-flowered hybrids vying for attention somewhere in the clematis world, each with a personality of its own, no single variety will ever corner the market.

One candidate that until recently could almost be regarded as a "sleeper" is 'Kardynał Wyszyński'. Bred by Brother Stefan Franczak, whose 'Warszawska Nike' we featured in the January 1999 Clematis of the Month, it was introduced to a wider clientele as early as 1986 by the Fisk Nursery, but somehow got relatively little play from the international gardening press until the recognition of Brother Stefan's output as a whole brought each of his individual hybrids into sharper focus.

'Kardynał Wyszyński' is a summer-flowering variety of the Jackmanii persuasion. It can reach nearly 9' (2.75 metres), though generally it tops out at less. In any case it is easy to manage, and can be grown comfortably in a large container, or in combination with one's choice of shrubs and roses. The handsome planting shown above, with the Kardynał in full career, was photographed in mid-June at the nursery of Szczepan Marczyński near Warsaw, where it adorns the front of his home. Several I.Cl.S. members on their way to the Dresden Conference had the pleasure of visiting there and exploring the nursery, which is now a major source for Polish (and other) clematis. The Franczak varieties are of course specialties of the house. 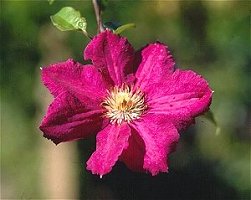 The Kardynał blossom is of medium size, 4" - 4.5" (10 - 11.5cm) and may have six to eight sepals, usually overlapping at the base. At first a crisp star-shape, it develops a graceful billowy appearance as it ages. The colour is a rich, luminous red; most lists follow the Fisk precedent and call it crimson, almost as if it would be too simple to dub it Cardinal red. The anthers naturally change with the dispersal of their pollen, from a tightly-bunched center of deep reddish-brown to the relaxed and contrasting eye seen here. Mature plants can flower almost continuously from early summer to early autumn. If the display gives out in younger ones, they can be cut back moderately and fed, and should mount another bloom before frost hits them. In warmer climates, as with most clematis, the flowers (and their colours) last longer if they are sited so as to offer some protection from the hottest sun.

Several of Brother Stefan's hybrids bear the names of persons close to him, or commemorate famous figures of Polish history: for example 'Kacper' (named for his father), 'Fryderyk Chopin,' and 'Jan Pawel II.' In naming this clematis 'Kardynał Wyszyński' he was paying tribute to the man regarded by most Poles as the prime defender of religious freedom against the repressive policies of the Communist regime, and virtually a martyr on account of his imprisonment between 1953 and 1956. Wyszyński's status as a spiritual leader did not diminish with time; in 1978 it enabled him to play a decisive part in the election of the first Pope ever to come from Poland. The statue shown here, erected in 1987, six years after his death, stands in the forecourt of the Church of St. Joseph the Guardian, not far from the old town centre of Warsaw.

Though the plant often appears in books and lists as 'Cardinal Wyszynski' — the Anglicized spelling from the Fisk catalogue — Brother Stefan prefers to see his cultivar names spelled in their Polish form, and this one has therefore gone into the Register under K for 'Kardynał.' The English rendering of it sinks to the rank of a misspelling. It remains to be seen whether the makers of labels will take notice.