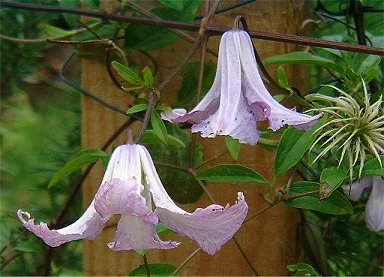 Clematis of the Month for November 2000

Last month, Clematis 'Betty Corning' made an appearance on the Home Page of this site, in token of an excellent second bloom in the Woolfendens' garden. Other reports confirm that this has been a banner year for 'Betty' in several locations, so we are featuring it this month for the benefit of gardeners who have not grown it. No doubt it is slackening off by now in all but the mildest areas, and will soon be a candidate for its annual deep pruning, but next year should see it back again as abundant as ever, from early- to midsummer on.

In growth habit it belongs with the viticellas. Vigorous and rather long-limbed, it can put on ten to fifteen feet (3m-4.5m) in a season and achieve considerable volume, though its leaves and leaflets are narrow enough and well-enough separated to keep the topgrowth from seeming (or being) unduly heavy. The flower, as shown, is a 4-tepalled nodding bell usually measuring between 1.5" and 2.5" (4cm and 6cm) long, each tepal flaring at the bottom and recurving, sometimes deeply enough to hide the pointed tip. The outer surface of the bell is strongly ribbed, often with a white bar (seen inside as well). The color varies with seasonal patterns of weather, but in the first bloom of the year is most often a light lilac, deeper at the margins. In the mass the blossom brings to mind both of the presumed parents, C. viticella and C. crispa, the former for its wide flare and the way it hangs from the stems, and the latter for the graceful curl at the tips.

'Betty Corning' could properly be described as a foundling. It is said to have been spotted by the "real" Betty Corning in someone else's garden, one day in the early 1930s when she was out for a walk. Being a dedicated plantswoman, she was not backward about asking questions and accepting a cutting from the plant, which she raised with care, and in due course she saw to it that the plant was properly "published." The first account of it — by T.R. Dudley, a botanist who later did major research on maples and hollies — came to be quoted with relish in nursery lists, for it described the plant as "a dream ornamental: a summer-long bloomer with a profusion of large, fragrant flowers...easy to cultivate, hardy in winter, able to withstand drought." Given that send-off, it is surprising that 'Betty Corning' did not sweep the gardening world, but in fact it took many years for the plant to get into adequate production. Knowledgeable gardeners might ask for it, but it was seldom to be had. Only in the last decade or so has it been widely known, even in the United States, though now that its merits have been discovered it is fast becoming a precious item in the trade.

As to Elizabeth Corning herself, her story belongs more to social history than to gardening. Reading about her is fascinating, but more than a little sad: it is hard to resist the impression that she stepped straight out of a novel by Henry James. Born and bred in old-line Philadelphia, and an aristocrat to her finger-tips, in 1932 at the age of twenty she made an outwardly brilliant marriage to the scion of the storied Corning family of Albany, New York and within a very few years found herself the First Lady of that city. Her 24-year-old husband, Erastus Corning II, was a man of such magnetic charm that when family tradition led him to run for the State Senate he had no trouble winning, and when he was then persuaded to run for mayor of Albany, he was elected not just that once (in 1942) but eleven times in a row, for a total of forty-two years. During all that time he was too busy, too caught up in the Democratic party machine that ruled Albany, and — an open secret — too close to another woman, to pay much attention to his wife or children. Betty, a proud and reserved woman, chose to be on public view only when necessary, and increasingly took refuge in her gardening interests, which included not only her own garden at Corning Hill, but regional and national garden organizations. One uncharitable wit remarked that she took more satisfaction in her seedlings than in her children. But the public attitude toward her, though mixed with pity, was decidedly respectful. (More details, none of them horticultural, are to be found in the 1997 book by Paul Grondahl, Mayor Corning: Albany Icon, Albany Enigma, ISBN no. 1881324028.)