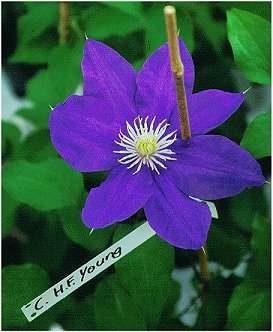 Clematis of the Month for December 2000

Though it is hard to anticipate what will happen to colors as they make the journey across the Internet, odds are that most viewers of the handsome blue face of Clematis 'H.F. Young' above will think, "It's not blue, it's deep lavender (or maybe even violet)." And indeed it is. The blossoms of nearly all the large-flowered "blue" clematis start out with a strong infusion of lavender or even violet, which then moderates to the light or mid-blue we think of as their characteristic colour.

This is not at all strange, considering that it took hard work and good luck to produce a large-flowered blue in the first place. Of the original parents of the large-flowered hybrids, only C. patens (in some of its forms that may or may not have been involved) had an appreciable amount of blue in its genes. But some early hybridists, knowing how valuable a large blue flower would be to the trade, made efforts to coax the naturally-occurring lavenders in that direction; we owe our present rich supply of good blues to their scattered and often unrecorded efforts over many years, as they interbred and selected, and occasionally brought in small-flowered clematis—like the non-vining C. integrifolia—along the way. Most of the early mileposts are gone now, such as the French C. 'Aureliani', with (we learn from Moore and Jackman) "well-formed porcelain-blue flowers," released as long ago as 1865. But we can hardly repine at the losses when we realise that nowadays in one part or another of the world market we have upwards of seventy large-flowered clematis that can arguably be listed under "blue." (Not counting some others that are persistently blue in catalogue descriptions but tend to look purple to an innocent eye.)

By general consent, 'H.F. Young' is one of the best. The Spring blossom may range from 5" to as much as 8" (13cm-20cm) and may have six to eight sepals, lavender—or mauve—blue on opening, radiating out from that strongly contrasting creamy eye. Occasionally it will have rudimentary extra sepals, giving it a semidouble appearance. Despite the short points, the impression is of a rounded rather than starshaped flower. (The blossoms are often thrown out in pairs along the stem, with a set of three at the top.) After a few days the colour settles into a vivid blue—"Wedgwood" is the word that has accompanied it for years. With fading, a paler bar becomes more noticeable, white on the underside. In repeat bloom toward autumn the sepals are likely to be narrower and the flower less full; it may also be lighter in colour, though still unmistakably blue.

As with other Group II plants, the best time for a grooming comes between the two crops, just after the Spring bloom has gone by. This may be no more than a tidying up, but it is worth observing that one way to capitalize on a major virtue of this variety, its natural bushiness, is to cut back at least some of the stems with a strong hand in the early years. It does not greatly mind being topped; it will flower almost from head to foot in limited space for several years, and so is a prime choice for container growing. On the other hand it is equally good—and more versatile—at full height, which can be anywhere from 8' to as much as 12' (2.5m - 3.5m) depending on its growing conditions. It readily accommodates itself to a trellis, or wall-planting, or perhaps best of all, companionate marriage to a favourite shrub that is large enough to support it. In flowering season it could overpower too small a host.

'H.F. Young' came out of the wonderfully productive breeding program of Walter Pennell's Lincolnshire nursery, along with such other notable cultivars as 'Will Goodwin,' 'Mrs. N. Thompson,' 'Veronica's Choice,' 'Richard Pennell,' and the show-stopping double he named for his wife, 'Vyvyan Pennell.' All these and many more had the great advantage of being exported almost worldwide as new introductions in the 1960s and later by the Fisk Nursery, and hence gained an international following in relatively short order. 'H.F. Young' is one of the older ones, having been raised from a seedling in 1956 or thereabouts. It was named for Horace Young, a former manager of the Scartho nursery, a branch of the Pennell firm. Walter Pennell habitually kept good notes on the derivation of his hybrids, but in the case of 'H.F. Young' the parentage was either unrecorded or unknown.