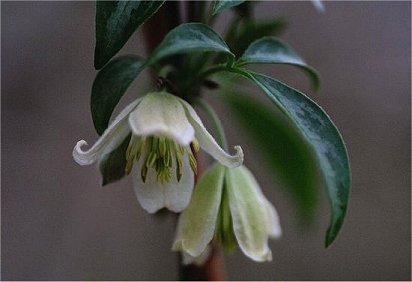 Clematis of the Month for January 2001

In the past dozen years we have seen a huge expansion in worldwide resources for lovers of clematis—a stream of books and hence of illustrations, an ever-increasing presence on the Internet, and even the founding of new societies. Meanwhile the growers and breeders have been busy, and every year brings announcements of "new" clematis. Most of these newcomers are large-flowered hybrids or named selections of the familiar species, because that is where the market is. But for some enthusiasts, brimming with the latest information, none of these introductions can quite compete with a "new" or relatively obscure species. Plants of such species, especially wild-collected, are likely to be next to unobtainable, no matter how often they are recommended in print; witness the perennially unsatisfied demand for Clematis texensis. So collectors who want them recognize that they may have to grow them from seed. But when a species begins to find admirers, with luck a specialist nursery somewhere may take notice, acquire the seed, and start getting up plants for sale. There are signs that the time may be arriving for the one we feature here, Clematis fasciculiflora.

This evergreen subshrub from southern China is hardly "new." It was recorded as long ago as 1889. But garden writers have tended to pass it over or suggest that it may lack interest as an ornamental plant. Not necessarily. Gardeners who meet with it in a good form usually are attracted at first by the distinctive foliage, with its clean, crisp-looking leaflets in sets of three—reddish or purplish at first, each marked with a silvery stripe down the center. As the leaflets age they turn green and may lose the variegation, but autumn brings another gradual change, this time to a rusty shade—a brief down-time before the plant recalls it is supposed to be evergreen and starts replenishing.

Being noticeably warmer-blooded than most clematis, it is a plant ready and waiting for areas that are mild the year round. Gardeners who cannot grow (for example) C. armandii are unlikely to succeed with C. fasciculiflora unless they take strong measures to protect it. But southern gardeners should take note that this species has a signal virtue: it is one of the relatively few clematis that flower in winter. Bloom-time is likely to be January-February but can be earlier or later (and longer or shorter) depending on the site and the weather. 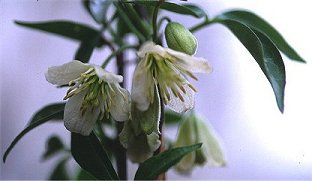 The small, fragrant flowers appear at the axils in small bunches—fascicles— of three or sometimes four, looking much like the half-open bells of C. cirrhosa. They do not have the cirrhosa speckles, and are usually whitish rather than creamy or yellow, but often show the faint tinge of pink we see at times on blossoms of cirrhosas like C. balearica. Since the plant is naturally tall—to 15' (5m.) if not intentionally pinched back during the warm months to keep it lower—and bears its flowers mainly in its upper reaches, one looks upward into most of the blossoms. They have an almost demure charm, and the scent of course is a welcome bonus.

Those who are interested in placing C. fasciculiflora in the framework of the genus will find they may choose between two expert opinions, or wait for scholarly arbitration. Magnus Johnson in Släktet Klematis follows precedent by locating it in his Section Flammula, but gives it a subsection of its own. Christopher Grey-Wilson in his Clematis the Genus acknowledges this but prefers to place it with the montanas and cirrhosas in his Subgenus Cheiropsis. The decorous conclusion is that there is much to be said on both sides, and meanwhile, planting may proceed.