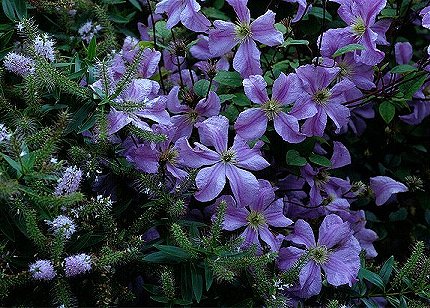 Clematis of the Month for February 2001

One of the first clematis to be included in this monthly feature, back in September 1997, was the almost universal favourite C. 'Perle d'Azur.' This month we bring on a clematis that has much in common with 'Perle d'Azur,' but differs from it noticeably in one respect that could be crucial for many gardeners, its size. 'Perle' is a big plant with a rangy habit of growth, and could easily grow into more of a good thing than a small garden can handle. For gardeners with little room, this New Zealand import is a heaven-sent alternative. It has the invigorating flower power of 'Perle d'Azur' and the same long season, midsummer into autumn, but in contrast will normally top out at about half the height of its more famous relative. Not only that, but it tends to flower almost from top to bottom, a trait not usually found in plants of the jackmanii-viticella strain. (It does not bloom in February in the Northern Hemisphere, be it admitted, but this month we are calling upon our neighbours to the south.)

The blossom of 'Prince Charles' (left) varies in colour with the prevailing light, with a now-you-see-it, now-you-don't infusion of pink against the blue background. Accounts understandably differ on the basic shade, with mauve-blue in the majority, but it is also well recorded that in certain lights the blue can take on a tinge of green, in interesting harmony with the greenish yellow anthers. The flower is likely to be somewhat smaller than that of 'Perle d'Azur,' (right) but not by much, and with its full complement of six sepals it closely resembles that flower, as the photographs suggest; but when it has only four the shape is surprisingly reminiscent of C. montana 'Tetrarose.' (Now there is a project for breeders: a montana with blue blossoms!). The flower nods slightly at first, but opens out fully, with a twist or backward curve to the sepals. As with 'Perle d'Azur' there is something fresh and light-hearted about the sheer abundance of bloom, even after the peak of it has passed. 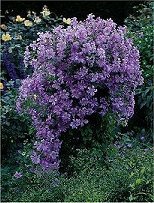 The plant has few limitations as to garden usefulness. It works well in any of the customary uses of Group C clematis, and in addition is quite suitable for container growing on account of its manageable size—anywhere from 5' to 8' (1.5m to 2.5m). Its only handicap is that it is vulnerable to powdery mildew, and hence should be placed where it will get good ventilation, and kept at a decent distance from otherwise tempting companions that have the same tendency. As to companions, there will undoubtedly be some disagreement over the propriety of growing this plant in tandem with C. 'Princess Diana,' an exploit that has indeed been tried. There can be no doubt, however, that it goes splendidly (and non-politically) with a broad range of the clematis blues, from C. durandii at the dark end to cultivars like 'Blekitny Aniol' at the light. And of course with many roses. The blossoms, by the way, keep well, and hence are popular in the cut-flower trade.

A note on origins. There is a conjecture afloat that C. 'Prince Charles' is in fact a survivor from an earlier age, and that its name should properly be C. 'Modesta.' Considering that C. 'Modesta' is apparently bygone elsewhere, no way of proving or disproving this remains unless some lucky explorer comes upon a divinely guaranteed specimen of the plant somewhere in the world, with which our plant can be compared. As far as we know at present, the story of C. 'Prince Charles' began when New Zealand's Alister Keay acquired it in the mid-1950s as an undocumented cultivar, saw its merits, and started producing it for the trade. It is not clear who named it, or exactly when, but it was already 'Prince Charles' when the Fisk Nursery introduced it in England in 1986. (The Fisk catalogue of that year recorded that H.R.H. Prince Charles had been unaware there was a clematis named for him, but on being so informed, wrote that he was delighted to hear it.) But it would not be especially surprising if 'Prince Charles' were somehow found to be C. 'Modesta.' Many a cultivated plant lost for one reason or another from English or European lists has been recovered by way of the New Zealand trade, sometimes under a different name, and brought home to be re-introduced. Interesting clematis like 'Queen Alexandra' and 'The Bride' are cases in point. Conceivably, C. 'Modesta' as well. What gives a special touch of serendipity to the 'Modesta' connection (real or not) is that the cultivar usually so-called, a viticella x lanuginosa hybrid credited to the French breeder Modeste-Guérin (1866), is on record as one of the two parents of—'Perle d'Azur'! A fetching coincidence, but still some degrees short of proof. So it appears unlikely that C. 'Prince Charles' will become recognized as the parent of 'Perle d'Azur,' or undergo a change of name any time soon.