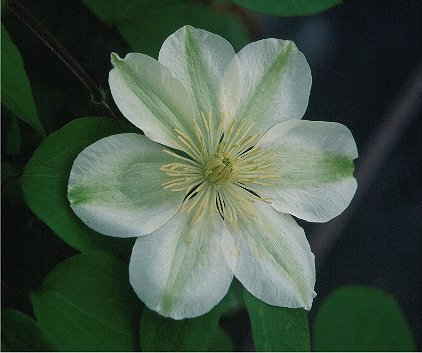 Clematis of the Month for April 2001

'Guernsey Cream' has a selling-point in its very name. By now, "Guernsey" registers on the brains of most devotees as the island site of Raymond Evison's great Guernsey Clematis Nursery, and "Cream" instantly tells us (closely enough) the colour of the flower. This handsome Spring-bloomer is still a relative newcomer, only a dozen years out in the nursery lists, but already it is widely recognized for its good looks and reliable performance. It is compact enough at about 8' (2.5m) to be suited to container-growing, but adapts well to all the customary garden uses of Group B clematis. As with other plants of this group, it may profit from a little grooming after its main crop in the Spring, or possibly a deeper cut on a stem or two if growth is thin at the base (though 'Guernsey Cream' usually takes care of that by itself). It responds with a repeat bloom on new wood later in the year.

As for the "cream," the flower begins almost yellow, with green tips or ribs or markings if the recent weather has been cold, and fades gradually to a creamy white. The overlaps and soft points give it a rounded appearance, and it is usually quite symmetrical. The anthers are yellow until their pollen is shed, and help create a first impression that the whole flower is yellow. Pale yellow, to be sure. Almost from the start of the breeding of large-flowered clematis, the English and European hybridisers realised that one thing they could not produce from the means at hand was a pure yellow variety, so for many it became a standard item on their wish-list—not a top priority, perhaps, for business was booming without it, but a potential feather in their cap if they could bring one to market. What a pity that no one could induce Clematis tangutica, for example, with its richly yellow bells, to mate with one of the good large-flowered whites and produce a brood of large-boned youngsters. But it was not to be, and even today we do not have such a clematis. 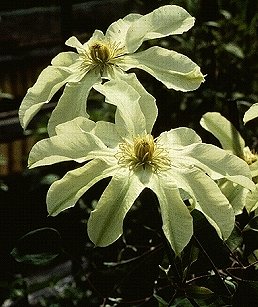 We do, however, have something very close. As far back as the late 1940s Magnus Johnson was offering a distinctive greeny-yellow hybrid that we know nowadays as 'Moonlight,' and in the 60s a Japanese import now usually sold as 'Wada's Primrose' was introduced separately in Holland and England. Investigation of this latter plant led us to a discovery that was old news in China and Japan—namely that there is a natural strain of light yellow in one of the most important and most variable parents of the large-flowered hybrids, Clematis patens. We have traditionally thought of it as a white- or pale lavender-flowered species, but the Japanese clematis called 'Manshu-ki' and the eye-filling specimen at the University of Beijing (pictured here), both forms of C. patens that come true from seed, are unmistakably yellow at first opening—a yellow touched with green. 'Guernsey Cream' is presumably related to the Japanese strain, though the details of its breeding are not on record. And there are others. Gardeners who cannot find this one in nurseries or catalogues may like to know that at least four more of these nearly-yellows are available and well worth trying: the aforementioned 'Moonlight' and 'Wada's Primrose,' the Japanese import 'Gekkyuden'—regarded by some as the yellowest of all—and Denis Bradshaw's delightful 'Lemon Chiffon,' which has a surprise element of its own, a delicate streak of pink in the middle of each sepal.

'Guernsey Cream' and the others all like sun, but they hold their color better if sheltered from too much of it.