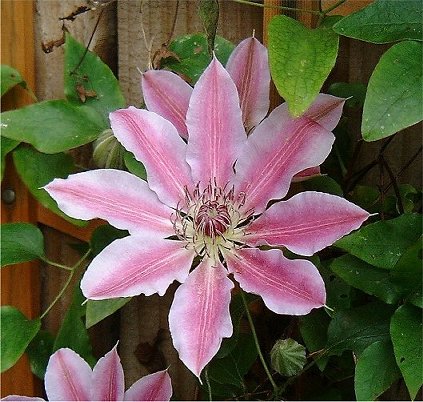 Clematis of the Month for May 2001

Perform a search for the clematis widely held to be the most planted of all, "Clematis Jackmanii," on Google.com, and you will come up with 1780 hits (so far). Since Jackmanii is the name of a whole clan of clematis as well as a particular one, some of those hits relate to other cultivars such as 'Rouge Cardinal' or 'Hagley Hybrid,' but the number is still impressive. But look up 'Nelly Moser,' and you are confronted with 2180—more by far than for any other clematis. It strengthens the impression that 'Nelly Moser' is not merely a favourite, but with its many descendants has somewhat altered the standard image of the large-flowered hybrid. Descriptions used to tell us primarily of the colour and shape of a big starlike or wheel-shaped blossom with a contrasting tuft of stamens at the centre. Now, more often than not, we expect to hear whether the flower has a prominent contrasting bar or stripe, and if so, what it is like. There are hundreds of variations, and tastes differ, so the matter is important to gardeners. Though no one plant could have brought about this interesting change of perspective, 'Nelly Moser' has played a major role.

It was not the first cultivar with contrasting midribs. Even at the Versailles nursery where it was released in 1897 it followed a barred variety that the owner liked well enough to introduce with his own name. (C. 'Marcel Moser,' still in the trade, and a good cultivar.) Crossing this namesake with another barred clematis from Lemoine called 'Bélisaire,' now lost, he next produced 'Nelly Moser.' And that was just the beginning. In the ensuing century 'Nelly' was bred to countless clematis by hybridists around the world, working as usual to get a combination better than anyone else had, and the result has been a constant outpouring of rival cultivars, most of them barred. Not long ago when we in the West finally had the opportunity to catch up with clematis from breeding programs in countries behind the Iron Curtain, we learned that an astonishing number of them involved the pollen of 'Nelly Moser.' And throughout all this attention from the professionals, 'Nelly' steadily maintained its own popularity with gardeners. It has not been dispossessed by its children.

Why? First, of course, people must like the way it looks, but it is also a dependable grower and relatively easy. It is strong, capable of spreading well from the base, and adaptable to all sorts of garden uses. Its height depends upon growing conditions and hence is variously reported: from six to fifteen feet (2m - 4.5m) depending on what authority you read. One estimate of 3' to 5' (1m - 1.5m ) can safely be ignored. Bloom occurs in the Spring and again later, fitting the pattern of Group II or B for pruning. The Spring flower normally has eight sepals, sometimes seven, with light margins and a deeper-coloured bar. Descriptions of the colours are anything but unanimous, ranging from light-and-darker-pink through lavender-and-purplish-red to rosy-mauve-with-a-carmine-stripe, but considering that the plants involved are being seen by different eyes at different times of the day, at differing elevations and at differing temperatures, it is no wonder if the views do not quite coincide. Observers do agree that the anthers are purplish or brownish red, a hard colour to describe. The later crop of blossoms on the new wood is likely to go off somewhat, with variations in shape and colour, but that is normal behavior for the "Spring" hybrids. One other garden merit: the seedheads that follow the flowers are showier than most.

Fortunately, most advice about 'Nelly Moser' includes the suggestion that the plant looks best in partial shade, and should not be subjected to full or all-day sun. Gardeners who fail to allow for this are all too likely to have a splendidly productive vine that covers itself with big, handsome flowers which everyone will admire for perhaps as much as a week, and which then turn a painful raddled gray. The only merciful thing to do with such a spectacle is to cut it down, but there may not be many of us who could stand up to the challenge. With dappled sunlight no such disaster occurs; the flowers fade gently, and the colourless stage is soon gone. This option applies to all the large-flowered clematis to some degree. The maxim "Heads in the sun, feet in the shade" is one of those rules of thumb that ignore too many fingers. It is appropriate for sites that offer temperate conditions. Clematis do indeed like sun, and need it for growth and flowering. Even so, what they like most about the sun is its light, not necessarily its heat. Put one of them in a hot spot, and if it has no shelter from day-long sun it can soon have trouble functioning and in the hottest weather may shut down. So in many sites it makes sense to avoid the danger by giving some overhead protection from all-day exposure. Host-plants can provide it; so can overhanging boughs. It is especially important for the barred varieties like 'Nelly Moser,' and some other vividly coloured ones that stand to lose most of their beauty from too-rapid fading.